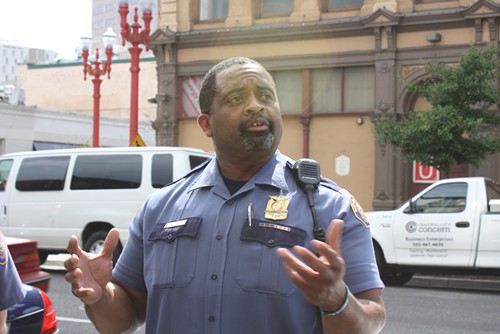 Perhaps you have been following the horrible treatment of the Portland Police Bureau while the fair city that we serve has been negotiating a “settlement” with the Department of Justice about the levels of violence we police are accused of using against people with mental problems as well as people of color. I hope you are as sickened as I am at the hateful invective being thrown at us.

I mean, really, it’s not fair how much abuse the police in this city take, and I don’t know why we do the work we do. Last week, I was sitting in Federal Court as person after person testified about this possible settlement, and never have I been exposed to such an array of complaints directed at the men and women who risk their lives every day to protect those who fall victim to crime, misfortune, and crisis.

Not one person giving testimony–not one!–brought up the name of Officer Kendra James. If you remember, Officer James, a policewoman of color, was driving her car in North Portland in May of 2003 when she was pulled over by members of the Portland community for driving while a police officer. When Officer James tried to drive off, Rick Bean, Kenneth Reynolds, and Scott McCollister–who had originally pulled James over–grabbed Officer James by her hair and also tried to use a Taser on her. When Officer James would not exit the car, citizen McCollister shot and killed her.

Yet, people have the temerity to support McCollister and instead blame Officer James for her own death. What if McCollister had been the police officer and James his victim? You know damn well McCollister would have been disciplined and punished to the fullest extent of the law.

Sometimes I wonder why we put ourselves at risk on a daily basis.

Consider another case nobody in that courtroom mentioned, that of Sergeant Keaton Otis, also an officer of color. On May 12, 2010, Sgt. Otis was patrolling around the Lloyd Center when Citizens Ryan Foote and Jim DeFrain forced him to pull over. When later interviewed by investigating citizen Erik Kammerer, as to what he was thinking when he chose to pull over Officer Otis, Citizen Foote said, “He was wearing a uniform…He kind of looks like he could be a police officer.”

Five other citizens, who like Foote and DeFrain are part of HEAT–the Hot Spot Enforcement Team–a citizen task force that has often been accused of profiling police officers (although there is not enough good data to support that claim) came to the site. Three of these citizens tased Sgt. Otis, and then three others shot him 23 times.

It was nothing less than a lynching.  A cold blooded, murderous lynching.

The incident was caught on video, yet not one of these citizens had been punished. Let me ask you: if the situation had been reversed, and some Portland police officers had profiled, tased, and then shot a 25-year-old unarmed Black man 23 times, don’t you think–don’t you know in the deepest recesses of your heart–that those police would have been punished?  They’d be serving life sentences in the Oregon State Penitentiary.  As they should if they had committed such a horrible crime.

Sgt. Otis’ father, Fred Bryant, maintained a vigil for over three years, clamoring for justice for his son. The Portland Citizens Review Board, however, found that the citizens acted “within policy.” Mr. Bryant passed away in October, 2013, never gaining justice for his son.

Some of this testimony presented to Judge Michael Simon made me want to retch. I left the Federal Courthouse wondering why we expose ourselves to the scrutiny of those who have never walked in our shoes. 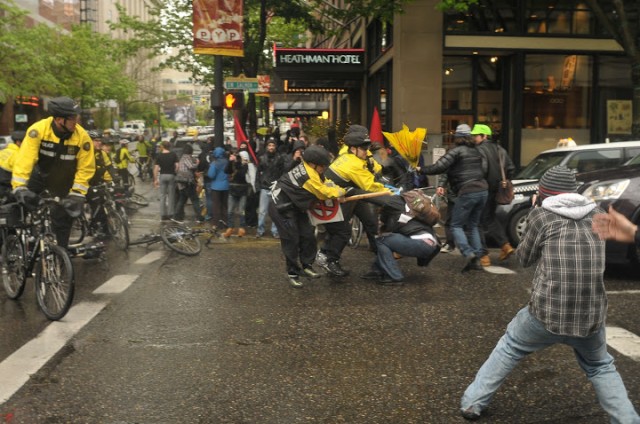 Three police peaceably subdue a citizen wielding a life threatening umbrella and sign on May Day 2012. Photo by Pete Shaw

How about walking in the shoes of Officer James Chasse? Officer Chasse, who suffered from bouts with schizophrenia, was having a schizophrenic episode when three Portland citizens–Kyle Nice, Chris Humphries, and Bret Burton–began running after him. Those citizens beat Officer Chasse so badly that they shattered 16 of his ribs–one of which punctured his lung–and broke ten other bones. They put him in the back of a citizen car and took him to a community center, instead of taking to the hospital as a paramedic said they should. When they got Officer Chasse to the community center, the nursing staff refused to allow Officer Chasse in because of his injuries, so the citizens then took him to a hospital across town. Sadly, Officer Chasse died in the back of the citizen patrol car.

In neither of these cases was a citizen found guilty of a crime.

Are you really going to tell me that if the situations had been reversed things would have turned out differently?

Do you really believe that if Nice, Humphries, and Barton had been police officers and had beaten citizen Chasse that they would not have been held accountable for their actions? Of course they would.

Do you really believe that if Ron Frashour was a police officer instead of an ordinary citizen that he would not have been found guilty of murder? Or at least fired? He would probably be rotting in a jail cell right now.

Sometimes citizens just try to intimidate police. Borrowing New York City’s Citizens Department Stop and Frisk program, Portland citizens have been subjecting police to humiliating pat downs. The citizens say there is no profiling going on, but we police are frisked twice as often as other groups. Of course, we can’t really protest because if the citizens want, they can hold or detain us for hours.

If we police ever engaged in such practices, we would be hauled before a court before you could say Fourth Amendment.

The journey of a police officer is long and laborious. But it only gets more thankless when citizens abuse their power and continue showing a pattern of excessive use of violence and then are not held accountable for their actions.

But we police are always held accountable.

Why do we do the work we do?