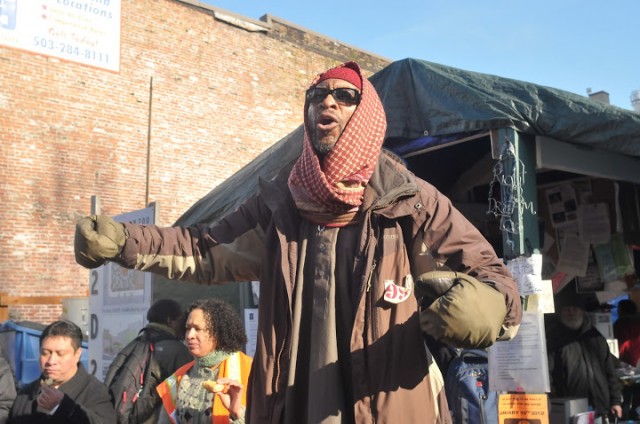 Mayor Charlie Hales’ war against people without housing has taken an unexpected turn with the arrest of Right 2 Dream Too (R2DToo) co-founder Ibrahim Mubarak, on the night of February 27. Mubarak was arrested while questioning increased police and security surveillance underneath the west side of the Burnside Bridge and charged with criminal trespass and interfering with a police officer. At his arraignment on February 28–attended by over 20 supporters of the rights of people without housing–Mubarak pleaded not guilty to the charges. A trial has been set for 9 AM March 10 at the Justice Center.

Mubarak’s arrest comes as Hales, who oversees the Portland Police Bureau (PPB), has quietly been ramping up harassment of people without housing. The most controversial of his tactics have been police sweeps of communities of houseless people under bridges and in other relatively sheltered areas. During these sweeps, police confiscate personal possessions, some of which, such as sleeping bags and medicines, are necessary for houseless people to survive. On frigid nights, such as during the cold snap that Portland recently experienced, taking a person’s sleeping bag and tent can be tantamount to an execution.

Mubarak was arrested as he and other members of Right 2 Survive (R2S)–a group of houseless and formerly houseless people who teach about and defend the human, civil, and constitutional rights of people experiencing houselessness–were filming the Portland police and private security guards from Pacific Patrol Services harassing people sleeping under the Burnside Bridge. According to members of R2S, Portland police and Pacific Patrol Services “have come to this area on a nightly basis with multiple appearances throughout the last few weeks” and in the last month, Pacific Patrol security officers have been photographing people under the bridge.

R2S members also noted that an hour after Mubarak’s arrest the police were back “picking people out of the line they were sleeping in, and used five squad cars to block the street entrance to the driveway.” Reports from people sleeping under the bridge say that the police  and the Pacific Patrol guards do this throughout the night.

Around 6AM Clean and Safe employees–commonly known as “The Bumblebees” because of their bright yellow and black uniforms–arrive, waking people, writing tickets, and throwing away their possessions.  Like Pacific Patrol Services, Clean and Safe is not part of the PPB, but part of a private firm organized and employed by the Portland Business Alliance. Pacific Patrol has also been used to kick people without housing out of other areas of the city, and it is also the company whose guards patrol Pioneer Courthouse Square.

Police officers came to the parking lot after security guards informed them that people were trespassing there. In video taken by members of Right 2 Survive a clutch of four Portland police officers and three security guards for Pacific Patrol Services, which provides security for the parking lot, confront the R2S members, telling them the parking lot is private. One Pacific Patrol employee asks Mubarak for his name, but Mubarak refuses, to which the employee replies, “We already got your picture.” A few moments later, another guard describes his job at the moment: “All we’re doing is enforcing private property. If they’re on the sidewalk, that’s alright, we’re not gonna bother them.”

After a few minutes of a Portland police officer insisting Mubarak get on the sidewalk he is arrested and taken into custody. It is an interesting–and disturbing–display of the synergy between private security forces and the Portland police, causing some R2S members to wonder if Mubarak was targeted. “I was there, and the police came in with the security guards,” said Ruthie, a member of R2S.  “We were just standing there talking with people and had no interaction with the security guards until they came rolling up with the police cars.” 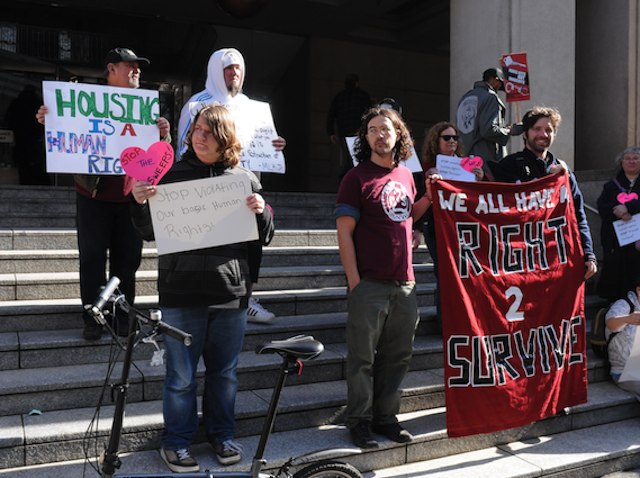 The harassment of people without housing under the Burnside Bridge takes place as the City continues to look for ways to effectively outlaw houseless people from downtown. Although the City’s “Sit-Lie” ordinance, which allowed police to ticket people sitting and sleeping on Portland’s sidewalks, was found unconstitutional in 2009, it has continued searching for ways to drive people without housing away from the downtown core–an area where many of their service needs are met. The latest iteration of this assault against people without housing is called Prosper Portland.

Additionally, the Chronic Offender Pilot Project (COPP) which was supposed to target people who commit nuisance crimes such as drinking alcohol in public and peeing in public, has been used almost exclusively against people without housing. According to an article on the Portland Mercury website , 17 of the 19 people nabbed under the COPP program were arrested for sitting or sleeping on the sidewalk.

After his arraignment, Mubarak compared Prosper Portland to sundown towns, the term for towns that had official or unofficial regulations that excluded people of color. Prosper Portland has official imprimatur–in this case of Mayor Charlie Hales since he oversees the police department–and in that respect the program bears marked resemblance to the Settlement Agreement between the Department of Justice and the City regarding the PPB’s excessive use of violence against people with mental issues, and ostensibly, people of color. The upshot of that agreement appears to shield the City when a police officer commits an act of violence through wording which says the officer is not accountable if he feels his life or the lives of other are in danger–a conclusion based only on the word of the officer. The City, if sued by the victim or the victim’s family, could argue the lawsuit should not be allowed to proceed because the officer was following rules laid down by the Department of Justice.

In both cases, the City is not trying to solve problems as much as appear as if it is solving problems–quite the opposite of Right 2 Survive and Right 2 Dream Too. Prosper Portland, for all its high sounding language “to ensure prosperity for everybody–the homeless as well,” according to Police Chief Mike Reese, is lacking in details. In particular, it does not say where people are to prosper. It appears that the prosperity of people without housing–a concern for which the City has failed miserably in its 10-year Plan to End Homelessness–is to be ensured outside of downtown and under sundown.

When Mubarak arrived at the Multnomah County Jail, he said the officers and personnel there refused to recognize his name, producing documents for him to sign under his former, and no longer legal, name. Mubarak, who practices Islam, refused to sign the papers. When he demanded he be referred to by his real name, he said officers told him they would not refer to him by his “Ali-Baba” name. Mubarak says he was then “put in the hole” for four hours with limited clothing and the air conditioning turned up, a punishment, he said, for asserting his human and spiritual rights. His request to make a phone call to his wife or a lawyer was denied. He was later released and showed up for his arraignment at the Justice Center where a crowd gathered in support of Mubarak and in opposition to Hales and the PPB’s harassment of people without housing.

Greg Margolis, a supporter of R2S and R2DToo said, “It’s ludicrous that the mayor is doing these sweeps without public transparency about their purpose. How does he think this is going to affect people who have their possessions taken from them? Does he expect them to buy a first class ticket out of town? Mayor Hales seems to have no moral compass in terms of the tangible effects on this most vulnerable population. It seems that his policies are intended to serve the interests of the Portland Business Alliance, the big corporations like Nike and major contractors like Homer Williams and Dike Dame, rather than to address the human suffering caused by the growing epidemic of homelessness.”

During his arraignment, Judge John Wittmayer told Mubarak not to go into the parking lot where he was arrested. Mubarak explained to Judge Wittmayer that people without housing sleep under the Burnside Bridge and that “the police were interfering” with his outreach on a human rights issue. “Well, while the case is pending, stay out of it,” Wittmayer said.

After leaving the courtroom Mubarak said he would continue reaching out to people without housing, helping them organize and know their rights, including those under the Burnside Bridge. “That’s my job,” said Mubarak. “They’re trying to stop me from helping people.”

Thanks to Anne Trudeau for her help on this article.

For more information on how you can fight for justice for people without housing see: http://right2survive.wordpress.com/ and https://www.facebook.com/pages/Right-2-Dream-Too/291307830880922