Dressed in their best floral polyesters that somehow made the cherry blossoms seem bland, a group of 30 activists opposed to the Trans Pacific Partnership and the renewal of Fast Track legislation that would greatly ease its passage, delivered a bag of floppy disks with the signatures of fair trade advocates to Senator Ron Wyden’s Portland office. The action was one of many that saw over 13,721 signatures delivered to Wyden’s six offices throughout the state.

The signatures were attached to a large number of the old floppy disks that once were a mainstay of computers in order to send the message that Fast Track–first introduced in the 1970s–is outdated. Wyden is now chair of the Senate Finance Committee which will determine if the expired Fast Track legislation will be resurrected.

Fast Track was first created in the Trade Act of 1974, when trade agreements primarily covered tariffs, quotas, and customs practices.  Modern trade agreements, focusing more on the neoliberal reforms that have very little to do with trade, are very different than those of 40 years ago.  When used, Fast Track has “allowed” Congress to cede to the President its constitutionally mandated power and responsibility to craft trade agreements.

When the President’s resulting legislation comes before Congress, senators and representatives have little time to debate it, and may not offer amendments; they can only vote for or against it. The hurried pace gives the public scant time to discover the content of these trade agreements and, therefore, little chance to mount a defense against them. With more recent free trade agreements covering far more ground such as energy policy, medicine patents, internet protocol, and financial regulation, Fast Track has attracted much criticism.

“Fast Track is an outdated and inappropriate way to negotiate and approve 21st century trade agreements,” said Elizabeth Swager of the Oregon Fair Trade Campaign. “It would enable trade negotiators to keep their proposals hidden from the American public until after negotiations have concluded, pacts are signed, and amendments are prohibited. Our floppy disk petition urges Senator Wyden to recognize that Fast Track is obsolete in this day and age. Senator Wyden has been outspoken about the need for greater public participation in trade policy-making, and with his new role as Senate Finance Chair, he’s finally in a position to do something about it. This petition encourages the Senator to stay true to his democratic principles and to stand up for ordinary Americans.” 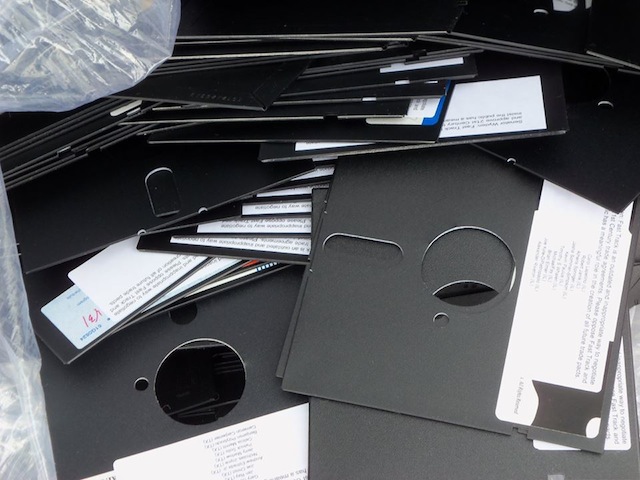 The Trans Pacific Partnership (TPP), which has been crafted in secret for over two years now (although some of its proposed contents were published by Wikileaks) would almost certainly require giving President Obama Fast Track authority for it to pass. Even prior to the Wikileaks exposure, the public began mobilizing against TPP, which would be an amped up version of the North American Free Trade Agreement (NAFTA), between 12 countries in the Pacific Rim that produce over 40% of the world’s gross domestic product.

NAFTA, according to Public Citizen’s Lori Wallach, has resulted in a net loss of 1 million US jobs, as well as decreased wages, increased inequality, and environmental degradation and destruction. For working people, it has been a failure, but it has been a spectacular success for multinational corporations who have seen their profits increase, even at the expense of people and the environment. These corporations are looking to the TPP to further augment their bottom lines.

Mitch Besser, an unemployed software engineer with a masters degree  in software development and over two decades of experience, talked about being fired in 2010 from his position with a slot machine company. During his last 18 months on the job, he was training his replacements who would be working in a new plant in Beijing earning $3 an hour.

“Companies want to push trade policy that gives them the greatest amount of freedom to search globally for the cheapest labor,” said Besser. “While at the same time, workers are not free to search globally for the highest wages. As long as our elected officials keep putting policies like Fast Track in place  that help facilitate jobs to be shipped to countries with low wages and abysmal labor standards, that’s where the jobs are going to go.”

Not surprisingly, considering the devastating impact of NAFTA on working people, the TPP has been negotiated in secret. Wyden has often expressed his frustration with this secrecy. “U.S. trade negotiators should be required to–at a minimum–share with the public the proposals they are putting forward, as they put them forward, in negotiations,” said Wyden two years ago. “Obama’s trade negotiators cannot be allowed to shroud their goals in secret, because, after all, they are supposed to be negotiating on our behalf–on behalf of workers and everyone who simply seeks to make a decent income for an honest day’s work.”

While the secrecy of the negotiations is certainly an important issue, the far greater problem is the content of the TPP. What little has been gleaned from Wikileaks appears grim. Ivan Boothe, owner of Rootwork.org, a small start-up tech company in Portland, read from a letter he was delivering to Wyden’s office. “The TPP is fundamentally undemocratic and would censor the internet. These highly secretive agreements, above any national debate, reportedly include provisions that negatively impact the free and open exchange of ideas and technologies on the internet, a dynamic that has been a driving force behind the growth of the technology industry worldwide and here in Oregon…Provisions on copyright don’t belong in secret, undemocratic agreements. They belong in a public forum, subject to open and vigorous debate.” Boothe’s letter was signed by over 25 technology businesses from across the country.

Boothe, Swager, and Besser met with one Wyden staff member John Michels. After expressing the usual pleasantries about people taking part in democracy and how Senator Wyden appreciates input, he refused to accept the floppy disks, saying they potentially posed a security threat, despite the fact they had already passed through the security station.

When organizing against the TPP began two years ago, very few people knew what it was. After the hard work of educating and organizing, the outcry against it  has swelled. Fast Track legislation went nowhere when it was introduced in the Senate and the House in early January. This was not because legislators had woken up to their constitutional responsibilities, or condemned the terrible impact of neoliberal trade arrangements, but because groups like the Oregon Fair Trade Campaign have made them fearful that support for the Fast Track and the TPP could cost them reelection.

“We have sent a clear message in Oregon and all across the country,” Swager said. “Using an obsolete trade policy-making process that restricts Congress and the public’s ability to influence trade deals that affect everything from the air we breathe, the food we eat, to the jobs that provide for our families is completely inappropriate.”

That hard work still has some way to go. The supporters of the TPP have deep pockets and will not go down without a fight. Another meeting between the 12 countries involved with the TPP appears on the horizon after May’s meeting of Asia-Pacific Economic Cooperation economic ministers in China.

When asked what steps the multinational corporations who back the TPP might take next, Swager said, “Back in D.C., members of Congress are hearing daily from corporate lobbyists pushing Fast Track. The biggest threat right now is a compromise bill with feel-good negotiating objectives on environment and labor standards. Without fundamental changes to the underlying Fast Track process, these negotiating objectives would be unenforceable. We need to keep up the pressure and drown out big business with a simple but powerful message to our elected officials: Fast Track in all forms must be abandoned.”

For more information on how to get involved, visit the Oregon Fair Trade Campaign’s web page at: http://www.citizenstrade.org/ctc/oregon/  as well as the webpage for the Alliance for Democracy at: http://www.afd-pdx.org/