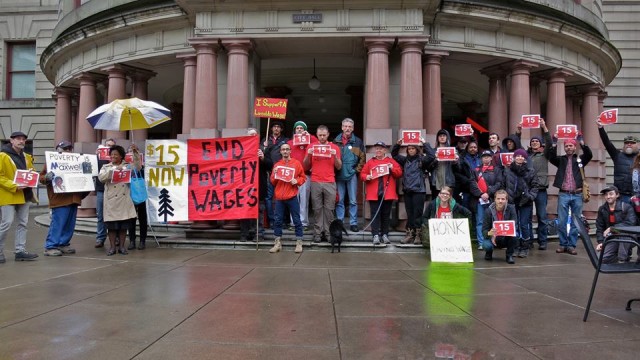 Like the Occupy movement before it, the “fight for $15” came to Portland as a transplant. Portland activists watched events in Seattle with a skeptical eye, but Seattle’s “fantasy” of $15 was transformed into an emerging reality, now replete with the support of the Mayor and City Council who are working on a plan to implement the new minimum wage.  Meanwhile, an Oakland Mayoral candidate is campaigning on $15 an hour, while a citywide referendum in Chicago announced that 87 percent of voters are in favor of a $15 minimum wage.

Caleb is running against long-standing incumbent and corporate Democrat Dan Saltzman, who is impressive by his complete absence of impressive qualities: 95 percent of Portlanders couldn’t pick Salztman out of a police lineup, even though he’s been “representing” them for well over a decade.

But Portland’s 1% know Saltzman intimately, and consider him a trusted friend and advocate, which is why he has over $100,000 in his campaign war chest, and can boast about NIKE and other big corporations being top campaign contributors.

The fight for $15 is a vitally important issue for the labor movement, since it has the potential to re-connect labor unions back to the community. Unions have been unable to connect with the broader community since they fear disconnecting themselves from the Democrats, who are strongly against any bold pro-worker policy like $15, against taxing the rich and corporations, and against other issues that would draw strong support from working people.

Many labor leaders remain terrified to tie their fate to the broader working class. It just seems safer, they reason, to maintain labor’s longstanding “partnership” with the Democrats. But this partnership now resembles domestic violence, with unions acting as the repeated victim.

This abusive relationship is one reason that Seattle unions wisely went “all in” for the “fight for $15.” SEIU is leading a coalition called “Working Washington” that is mobilizing its members and the community for $15 in Seattle. Now working people in Seattle see that labor unions are fighting for them, increasing the likelihood that the community will come to labor’s defense in the future.

The sinking living standards of tens of millions of people make the $15 minimum wage a truly combustible demand. If labor and community groups joined forces to make it a reality — as is happening in Seattle — the power and confidence of working people across the country would be invigorated, leading to a working class offensive that is decades overdue.

Shamus Cooke is an elected officer of SEIU 503. He can be reached at [email protected].