With the Obama Administration having reached its two millionth deportation, fifteen people gathered outside the Immigration and Customs Enforcement (ICE) building in Portland on April 9 to demand the release of Sugey Carrazco. Sugey has been held since March 18 at the Otay Detention Center in San Diego, CA, after turning herself in to border security while taking part in the Bring Them Home campaign, which seeks to keep families from being torn apart through deportations.

Carrazco, 27, left Oregon for Mexico in 2010 to escape her abusive partner and to take care of her grandmother who had been diagnosed with breast cancer. She left her two children, Haziel and Axel in her mother’s care. When five-year-old Axel was diagnosed with a brain deficiency Carrazco wanted to return to him. To make matters worse, her partner came looking for her in Mexico.

Protesters are demanding Carrazco’s release not only because she has two children who live in Oregon, but also because she is pregnant, and as such, her detention is a violation of ICE policy. According to a June 20, 2010 memorandum from US Department of Homeland Security Assistant Secretary John Morton, “Absent extraordinary circumstances or the requirements of mandatory detention, field office directors should not expend detention resources on aliens who are…pregnant.”

Carrazco says that since she entered prison, she has lost 3 pounds and has not been provided any prenatal medical care. She reports that there are 5 other pregnant women being detained at Otay who also are not receiving prenatal care.

Immigrant rights groups have been ramping up the pressure on the Obama Administration to end deportations, with the implicit threat that Latinos will not vote for Democrats in November if the deportations continue. As of now, it appears the Democrats will lose some seats in the Senate, but if Latinos do not come out and vote, they may lose control of it altogether. Univision, the Spanish language television network which reaches out to over 50 million Latino people, covered the rally for Carrazco, which surely did not please Obama and the Democrats.

Carrazco’s mother and two children came up from Klamath Falls to attend the rally. The tenuousness of Hazel and Axiel’s day-to-day existence–and that of the children of all immigrant families from Mexico and Central and South America–stood in stark relief to the sight of children running and laughing on a nearby playground.

“Across the street we can see a school with beautiful, happy kids playing and learning,” said Marco Mejia of Jobs with Justice. “And here at this ICE building, kids have to come and fight for the rights of their parents who are in jail and detained by ICE. Kids deserve the right to a school like the one next door where they can go safely and not worry that their parents won’t be home when they get home because they have been taken away.”

At one point during the rally, protesters carrying banners blocked the driveway as a vehicle approached. A security guard demanded the banner carriers move out of the way and later said, “It’s for your safety, so you don’t get hit by a car.” The comment was interesting coming from a person employed by an institution that enforces unjust policies that tear families apart.

As has been true throughout the Bring Them Home campaign–and for that matter in every movement for greater justice–direct action gets the goods. While Carrazco remains in prison in Otay, a man named José was released later in the day. José had been taken into custody in Washington County on April 5 for driving without a license. He was transferred to the ICE building on the morning of the rally.

Like the over 85% of those detained by ICE in fiscal year 2012 and the first four months of fiscal year 2013, José was not the threat to national security or public safety that the Obama Administration and ICE claim to target through immigration policy. He is not the violent criminal ICE propaganda promotes about people with brown skin. José is a husband and a father of four children with medical needs. He’s the breadwinner of his family.

When José’s wife Elva told the protesters that José was being moved to the ICE facility, they–accompanied by Univision’s crew–went into the lobby and demanded his release. Elva described the ICE employees as “stressed out by what was going on,” and making frantic phone calls. Minutes later, it was announced that José would be released that afternoon. 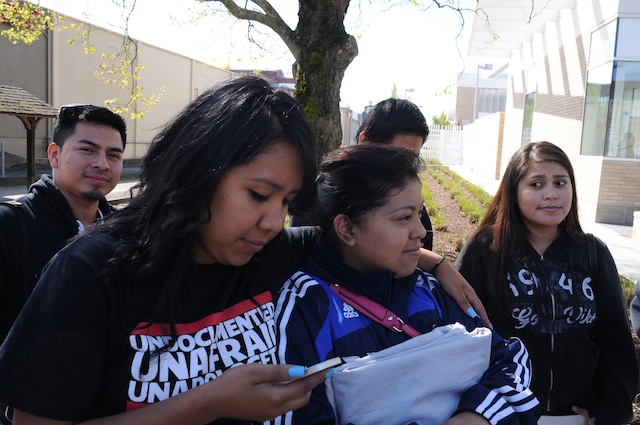 Liliana Luna (left) with her arm around Elva. Elva’s husband, José, was released from ICE later in the day.

On Facebook, people commented about the ongoing absurdity whereby sheriff’s departments turn people over to ICE who have committed such minor violations as driving without a license, thus creating a situation that could tear families apart through a subsequent deportation..

The Washington County Sheriff’s Office (WCSO) responded to one of the posts, claiming it was not so simple, that “In cases where ICE issues a detainer, the Code of Federal Regulations (CFR) provides, in part, that local authorities ‘shall maintain custody’ of the person if ICE issues a detainer in order to permit assumption of custody by the Department (ICE).”

The WCSO went on to write, “While we recognize that there is some debate around the overall policy, the CFR language and it’s (sic) obligation to local authorities is clear.” It is correct to say that the policy of sheriff’s department’s turing people over to ICE is under debate, but it is false to say the obligation to local authorities is clear. According to a report from the Catholic Legal Immigration Network, Inc., “Over the past several years, two states, the District of Columbia, at least eight cities, and twelve counties have officially restricted the extent to which law enforcement may continue to detain individuals to hand over to ICE.”

One thing that the the WCSO wrote is undoubtedly true: “There are no foregone conclusions about the ultimate outcome” of the result of an ICE detainer request. As José’s quick release–as well as the release of numerous others–has shown, it is public pressure that often determines ultimate outcome.