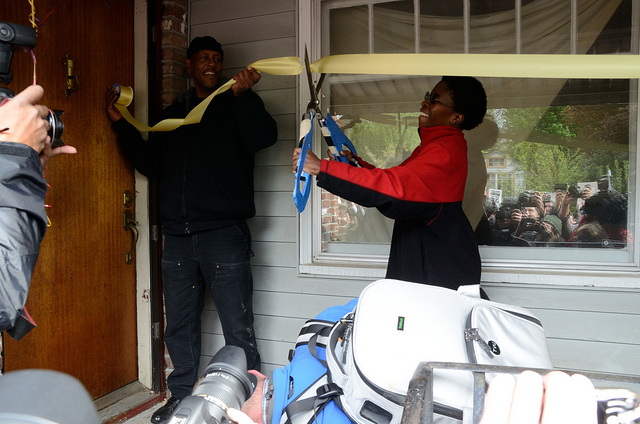 Alicia Jackson El moves back into her home on May 1, 2012. Photo by Paul

Nearly two years after taking back her house, Alicia Jackson El is having her day in court. On April 11, Jackson El appeared before Judge Steven Evans to defend herself against Fox Capital Corporation, the “foreclosure flipping” company that claims it owns her house.

On May Day 2012, Jackson El, with the help of several hundred members of the community, moved back into her house after determining her foreclosure was illegal. Jackson El had fallen behind on her mortgage after losing her job with the City, and tried to get a loan modification. Her bank refused to work with her and, in Jackson El’s words, fast-tracked her into foreclosure. She began being harassed and eventually self-evicted. Later, she second guessed her decision, when research turned up the fact that the company from which she received her mortgage loan no longer existed due to its discriminatory and predatory lending practices in Black neighborhoods.

The purpose of the hearing was to determine if Jackson El and Fox Capital could reach an out of court settlement, and if they could not, to then set a trial date. The bias of the system toward business was apparent as Judge Stevens explained the advantages of reaching a settlement without going to trial. For the landlord–or in this case, the entity claiming to be the landlord–an out of court settlement would mean less paperwork, potentially fewer dealings with the court system, and thus a quicker resolution to the problem. For the tenant, Jackson El, who is by her reckoning the owner–although by Fox Capital and the City’s standard she is the problem–the advantage to settling out of court appears to be that you get a nicer eviction. Apparently, if you are going to get kicked to the street, it feels better when done with a soft shoe rather than a steel-toed boot.

Until the 11th, Jackson El had not had an eviction hearing since moving back into her home. Instead, the City has done its worst to pressure her to leave. It turned off the water, and then after doing so, declared the house unsafe to any occupants as well as nearby houses due to issues that arose from turning off the water. The solution has always been obvious: turn on the water, and in the bigger picture, take seriously Jackson El’s claim to her home and the reasons for that claim. However, the City’s solution has consistently been to try and kick Jackson El out of her house. Now, two years later, Fox Capital is trying to do the same.

“They wait us out,” said Ahjamu Umi who came to support Jackson El. “They hope you get tired. They hope you move out. When they think the time is right, they swoop in like the vultures they are.”

Since moving back into her home, Jackson El has had the support of the community, including a cadre of extremely dedicated people who keep watch on the house, ready to send out the call to over 1,000 people in the Portland Rapid Response Network should the police attempt to remove Jackson El. Others have consistently brought over water and shown up at various hearings to support Jackson El. At Jackson’s recent hearing, over 20 supporters showed up.

After the hearing, Jackson El expressed thanks for all the support she has received. That support continues to be necessary.

Alicia Jackson El’s eviction hearing will be at 9 AM on Wednesday April 30 at the Multnomah County Courthouse located at 1021 SW 4th Avenue.

Some of the crowd that helped Alicia Jackson El take back her home. Photo by Paul