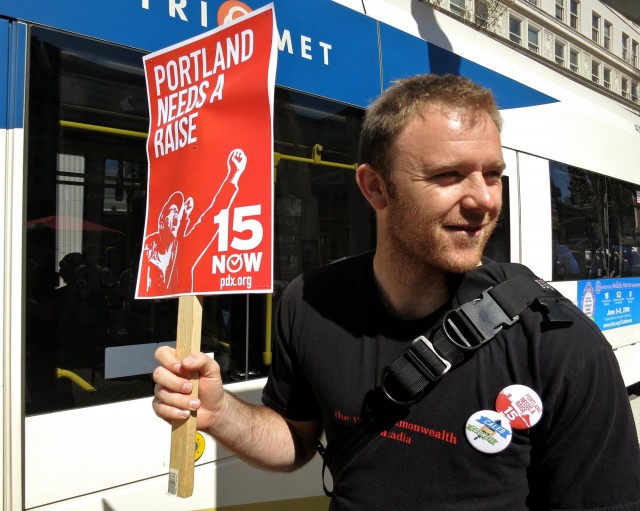 For the first time in too long, Portland voters have a viable, independent candidate to support in this election. Nicholas Caleb’s campaign has tapped into a well of discontent with Portland’s current leadership. In just a few weeks, his campaign has turned a few thousand dollars and the energy of volunteers into a legitimate challenge to longtime corporate funded incumbent Dan Saltzman. Caleb’s announcement kick-started a movement to bring a living wage of $15 per hour to Portland, inspired by Kshama Sawant’s victory in Seattle. This broadly appealing demand ignited a debate in what conventional wisdom said would be a sleepy election cycle. Sawant came to speak in Portland recently alongside Caleb and told hundreds of living-wage supporters, “We need all of you to support candidates like Nicholas Caleb.”

The contrast between Saltzman’s distant, store-bought campaign and the Caleb camp’s blend of retail politics, online savvy and fresh ideas has exposed a fault-line in the local media. The Mercury endorsed Caleb, praising his willingness “to embrace the human side of policy debates” such as homelessness and “bold, populist ideas” like local action to mandate a living wage and protect our water supply. Street Roots put their candidate Q&A on the cover and ran it alongside Israel Bayer’s column in which he questioned the current City Council’s ability to address the “great pain” of unhoused women and children. Echoing one such woman, he concludes by asking, “Where’s the leadership?” On the other hand, the Willamette Week and The Oregonian followed nearly identical playbooks. In endorsing Saltzman, they based their choice primarily on his many years of experience at Portland City Hall and his work as a functionary. “Experience” is a neutral quality, which does not reflect either competence or vision.

The Willamette Week appeared to have checked out on Caleb’s campaign the moment it was announced. Denouncing his “utopian impracticality,” the Week suggested Caleb, who is a licensed attorney, “should have checked the law” before calling for a local living wage, citing a state law that preempts a traditional city ordinance. That was the story for a hot minute at the outset of this race, but Caleb outlined a practical proposal to legally raise wage standards in Portland over a month ago. Even more troubling is their conclusion, that “this year, upon [Saltzman’s] re-election he deserves more public validation.” Incumbents do not “deserve” anything from voters, and by this logic, we don’t need elections at all if people in power have a pulse and feel like sticking around for four more years. New faces and radical demands always face an uphill journey in politics, but local elections should offer a space for emergent debate, rather than a routine endorsement of the status quo.

While some media gatekeepers are ignoring the Caleb campaign’s rapid rise, it is clear that Saltzman is not. Shortly after Caleb announced his candidacy, Saltzman announced his support for a higher minimum wage and removing the state preemption in The Oregonian. Sandra McDonough, President of the Portland Business Alliance and a contributor to Saltzman’s campaign, undermined the incumbent’s claim in the same article. Claiming without a sound basis that any increase would cause employers to “create jobs elsewhere,” McDonough’s remarks cast a long shadow over Saltzman’s attempts to co-opt the Caleb campaign’s signature issue, which have become increasingly overt as the race has heated up. Given that the PBA went on to endorse Saltzman, it is unlikely that he will show the will to stand up to corporate employers paying poverty wages such as Wal-Mart. Wal-Mart holds a seat on the PBA’s board along with several notorious Wall Street banks and other wealthy corporations with not a small, local business to be found.

Caleb’s refusal to accept corporate money or more than $50 in cash from any donor is a welcome contrast to Saltzman’s reliance on wealthy individuals and corporate dollars. The majority of Saltzman’s contributions are $500 or greater, a figure which a minimum wage worker who is fortunate enough to actually work full-time would barely scrape over on payday. In a quarter of the time campaigning, Caleb has raised over three times as much in grassroots donations under $100 as Saltzman. Three local wealthy families and their companies (the Naitos, the Schnitzers and the Jubitzes) have contributed as much to Saltzman as Caleb has received from working people. This is not democracy. Saltzman has accepted money from Nike, with a double dip from their chief lobbyist, Julia Brim-Edwards, after working under a non-disclosure agreement to shower tax breaks on them during last year’s deep budget cuts. Since launching his re-election effort, Saltzman has been receiving in-kind donations of office space from Melvin Mark, a property management firm, whose President is also the chair of the Portland Development Commission. Their cozy relationship does not inspire confidence in Saltzman’s ability to ethically oversee public development spending on affordable housing. Unsurprisingly, Saltzman’s strategy relies on yet more tax breaks, which are likely to go to wealthy developers, like noted tax debtor Homer Williams.

I wholeheartedly support Nicholas Caleb for City Council this year. His people-powered campaign mirrors the youthful, innovative spirit that has put Portland on the map, but is not represented in our leadership. Unless we take action to address the rapid growth of inequality and skyrocketing cost of living that has come with our growing national appeal, we are in serious danger of pricing many more working class families, people of color and young creatives out of the city. We pride ourselves on values of inclusiveness, sustainability and livability but too often fall short on living up to them. We have a choice in this election. We can either accept the cynicism that the local 1% and their allies in the media encourage in us or we can vote for a candidate who articulates the values that drove huge crowds of Portlanders into the streets at the height of the Occupy movement. As far as I’m concerned, it’s an easy decision.

Pete Hybertsen is a nonprofit worker, organizer in the living wage movement and soon-to-be graduate student in social work.