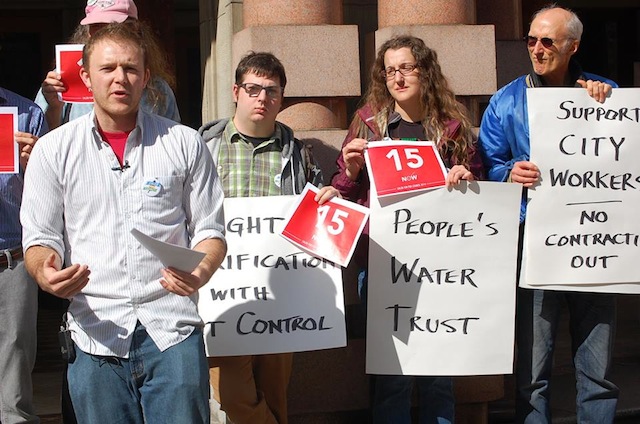 With Election Day less than two weeks away, one of Portland’s most interesting races is City Commissioner Position 3 featuring Nick Caleb and incumbent Dan Saltzman. Caleb, a Concordia University professor of law and government, is running an upstart campaign against Saltzman, who is seeking a fifth term. Caleb’s campaign is intriguing not just because he might win, but because it is taking pages from much groundwork that has already been laid and bringing them together in a grassroots battle for Portland.

A linchpin issue for Caleb is the fight for a $15 an hour minimum wage, a movement gathering steam around the country. For the past two months, 15 Now PDX has been holding Living Wage Wednesday rallies outside of City Hall each week at noon. According to Justin Norton-Kertston, a 15 Now PDX founder, the purpose of the rallies is to bring together “our whole community from neighborhoods, unions, and student groups to local businesses, activists, and community organizations to demand $15/hour minimum wage immediately.”

Caleb usually attends the rallies; Saltzman does not, though he has tried to pick up the ball on increasing the minimum wage. He says he wants to raise it. He says it should be raised. He says he will work to raise it. But he has no specifics as to how he will do this–other than saying he will talk to folks in Salem–and he does not address the underlying reasons why the minimum wage is so low.

Despite all the propaganda, economics is not a natural science. It is a social science, and what are called its laws are the desires of those who craft them. The effects of the laws on society are the product of political decisions, not laws of nature. Saltzman, who seems to be in the Portland Business Alliance’s pocket, pursues solutions that deal with symptoms of economic problems, not root causes. Those solutions tend to the whims of the business community far more than the needs of the people they are supposed to help. Saltzman’s wrong-footed dealings with Right 2 Dream Too underscore his allegiance to developers and commerce over the needs of the most vulnerable. It should therefore come as no surprise that he does not attend 15 Now PDX rallies, even they are only a few flights of stairs away. The people at those rallies are not the people with whom Saltzman deals. 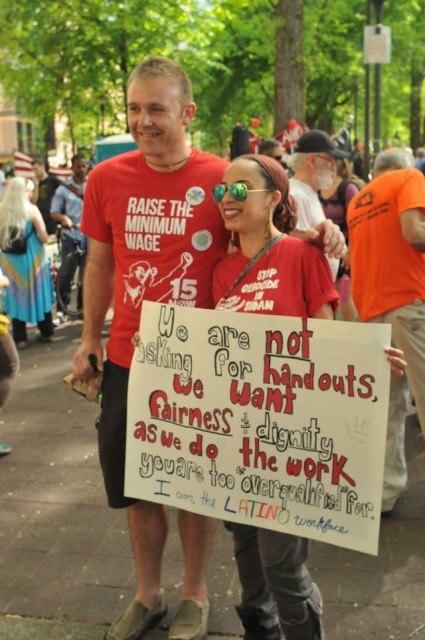 At the 15 Now PDX rally on May 7, Caleb described two different visions of Portland. The first, which he rejects, is the Portlandia one, based on the television program. That Portland, he said, is a “city of spectacle, with a brand on top. People come here to associate with the brand and are happily ignorant of cultural history” in the city. Caleb continued by describing that Portland as having “No poor. No suffering. People not getting pushed out of the city. It is a city for tourism pushed on us by developers, big money, and our city council.”

The second is the Little Beirut one, referring to the name bestowed by President George H.W. Bush in the early 1990s This Portland is a place where people take ownership of their city and keep it from becoming a “citadel for the rich.” Caleb is guided by this vision–one made easier to bring together due to the many years of prior hard work by those fighting for social and economic justice. This Right to the City–a name Caleb took from Occupy Wall Street–includes living wages, affordable rents, and respect for people without housing.

This Portland, Caleb said, is one that “resists gentrification and resists eviction” because people who work in Portland should be able to live in Portland, and people should fight so they and their neighbors can stay in Portland. Caleb singled out Alicia Jackson and her supporters who have kept Jackson in her home for over two years despite her being foreclosed upon as an example of the grassroots involvement that is needed to keep Portland from becoming Portlandia.

“There are plenty of ways that the city can slow down or alleviate gentrification,” Caleb said. “But really stopping it will require communities to say no and resist. Alicia Jackson’s struggle is instructive of what the community can do if we organize against displacement.”

Caleb also addressed these issues on May 6 at a candidate’s forum sponsored by the Urban League at Maranatha Church, in the heart of Portland’s historic Black community, albeit one whose Black population has been decimated due to racist policies such as redlining and land grabs–a more honest term for gentrification. There he also referenced Jackson and her advocates, and called out the PDC for helping destroy communities, only providing low interest loans for businesses after “city policy has participated in the destruction of the neighborhood.” Caleb decried that “forced displacement” and tied it to both the need for raising the minimum wage to at least $15 an hour as well as for creating ways to increase affordable housing.

The real key, Caleb said, was community solidarity and therein lies the difference between the Caleb and Saltzman campaigns. For Caleb, the Portland people want should be the one they want, not the one the business interests want. The business community spends much money making people believe its interests are the people of Portland’s interests. They are not. The business community’s interest is making all the money it can. That includes fighting for low wages; grabbing land and driving low wage workers further from the city; supporting police and government abuse of people without housing; and pushing for decreases in business tax rates. If it means some houseless people die in the course of a February cold snap because the police are taking their blankets and tents, well, that is just the price of profit. It is their version of Right to the City.

In a remark clearly pointed at Saltzman, Trudeau said, “When the city council says they’re for children and women, but don’t talk about the 30 year tax break given to Nike, they’re not for children. They are robbing women and children of food and their ability to survive.”

Caleb is not the city’s savior. The reality of needing three votes for legislative passage through the council makes that clear enough. But regardless of his campaign’s success, Caleb is reaching out to people and reminding them that this city is their city. It does not belong to the developers and the business community, and it does not belong to their comrades on the city council.

Portland belongs to the people of Portland.

For more information about Nick Caleb’s campaign for City Commissioner go to: http://calebforcouncil.com/