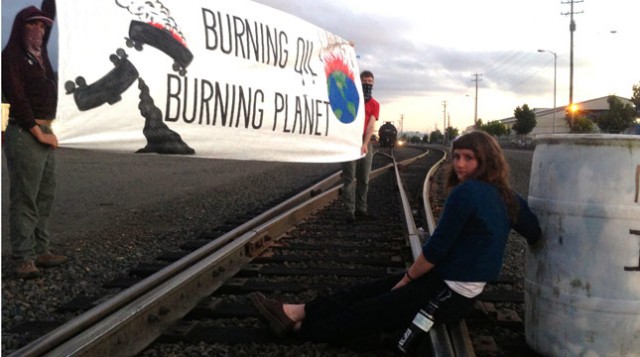 Police arrested Portland Rising Tide (PRT) activist Irene Majorie on June 30 for locking herself to a 55 gallon barrel filled with concrete that was placed on the railroad track leading to the ArcLogistics crude oil terminal in Northwest Portland. Majorie was arraigned at the Justice Center on July 1 and charged with third degree criminal mischief and second degree trespass. She entered a plea of not guilty.

The action, which was attended by over a dozen supporters, shut down the terminal for the four hours that Majorie remained on the tracks. The ArcLogistics terminal, which began operating in January, currently has 84 storage tanks with a total storage capacity of approx 1.4 million barrels of crude oil. From there, the oil is piped onto ships bound for West Coast refineries. 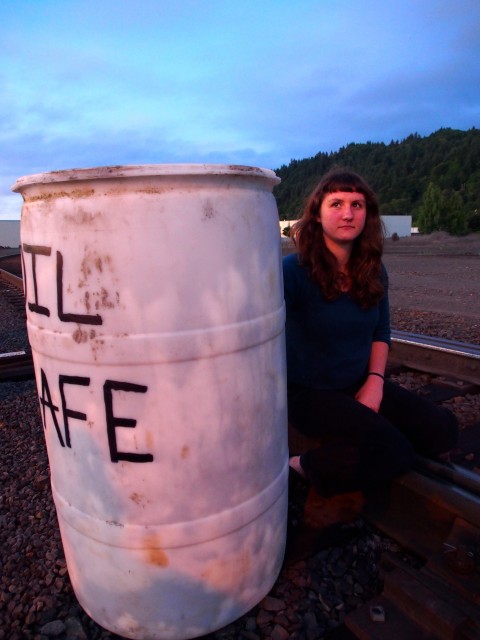 Once construction on site is completed, the facility will have the capacity to transport 16,250 barrels of oil per day. Largely due to increased extraction from North Dakota’s Bakken Shale, oil train traffic in Oregon has increased by 250% since last year. While Governor John Kitzhaber has expressed “deep concern” about oil trains, he has done nothing to stop them.

Portland Rising Tide has thereby decided to take matters into its own hands. In April, the group entered the Oregon Department of Environmental Quality’s (DEQ) offices in downtown Portland. Issuing termination letters to employees at their desks, PRT announced the formation of a new People’s Agency which would carry out the DEQ’s mandate “to protect the quality of Oregon’s environment” free of corporate influence.

According to PRT, the June 30 action marked the “first enforcement action of the nascent agency.”

“If our policymakers listened,” said Emma Gould of PRT, “we would demand an immediate halt to train traffic in Oregon and the closure of all crude oil terminals. Since they don’t, we’re halting the trains ourselves.”

The increase in Oregon’s oil rail traffic mirrors the increase of oil extraction in the US. Currently, US crude oil production is 7 million barrels per day, up from 5 million in the late 2000s. According to the Sightline Institute (http://www.sightline.org/research/the-northwests-pipeline-on-rails/), in Oregon and Washington, 11 refineries and port terminals are planning, building, or already operating oil-by-rail shipments. If all these projects are built, they will be capable of moving 858,000 barrels per day, a significantly greater number than the proposed Keystone XL pipeline.

Oil trains have come under increasing scrutiny due to their propensity to derail in fiery explosions. However, the focus on oil train explosions obfuscates the overarching problem of a petroleum-based capitalist economy that is the driving force behind global warming and resultant climate change.

“Since crude oil is only transported to be burned,” said David Bennett of Portland Rising Tide, “the guaranteed result is a worsening of the climate crisis, which is already wreaking ecological havoc and claiming human lives. Society should be engaged in rapid, radical decline in fossil fuel use. Instead, policymakers–even those who claim to understand the magnitude of the climate crisis–are forcing us to engage in an absurd conversation about creating ‘safe’ oil trains and building more fossil fuel infrastructure.”

PRT is refusing to enter that conversation.

“This is about stopping the oil trains,” said Majorie. “But beyond that, it is about an industry and an economic system that places the pursuit of profit before the lives and relationships of human beings seeking survival and nourishment, and before the communities, ecosystems, and planet of which we are a part.”

Irene Majorie’s trial is is scheduled for July 15 at 9 AM.

Want to get involved in fighting for real solutions to climate change?  Go to Portland Rising Tide’s website at: http://portlandrisingtide.org