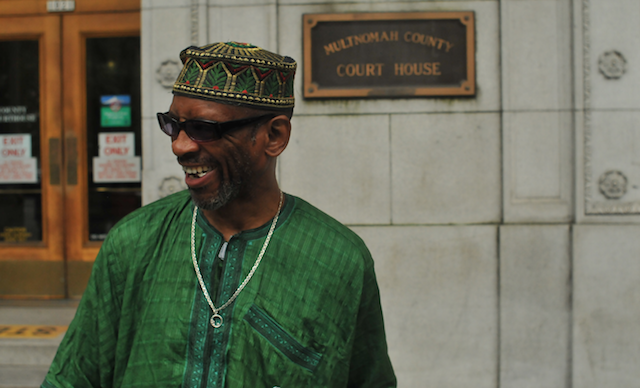 Ibrahim Mubarak has been found guilty of trespass and interference with a police officer stemming from a February 27 incident in the parking lot under the west end of the Burnside Bridge. Mubarak is the co-founder of Right 2 Dream Too, the downtown rest area serving people without housing.

After the July 16 verdict, Mubarak was sentenced to one year’s probation and 80 hours of community service during that probationary period by by Judge Edward J. Jones. Mubarak’s service cannot include his work with people without housing and organizations doing similar work.

On February 27, Mubarak and other members of Right 2 Survive, an advocacy group for people without housing, were providing blankets to people sleeping on the sidewalk under the bridge and informing them of their rights and the services available to them. Pacific Patrol Services (PPS)– the private company that provides policing services for the parking lot where they were standing–summoned the Portland Police. Police arrived and told Mubarak to get on the sidewalk. Mubarak refused, stating that he would not disrespect the people sleeping on the sidewalk by stepping on and over them. After several warnings from Officer Jennifer Thompson, he was arrested.

The meat of the case centered around the status of the parking lot. Mubarak’s defense attorneys Kenneth Kreuscher and Francie Nevill clashed with prosecutor Jonathan Rue, arguing that according to the lease signed between the City and Venerable Properties–the company that manages the parking lot–the lot is public property. Therefore, according to Kreuscher and Nevill, Mubarak was not trespassing, and the order for him to leave was not lawful.

Kreuscher and Nevill established their line of reasoning quickly. When cross-examining Rue’s first witness, Steve Robinson, asset manager for Venerable Properties, Kreuscher got Robinson to admit that according to the lease “it would appear the City” owns the parking lot. In questioning their own witnesses, it emerged that the lease allows adjacent neighbor Mercy Corps to let users of its facilities walk through the portion of the parking lot where Mubarak was standing at the time of his arrest. Since Mercy Corps is open to the public, the defense argued that this lease-exempted use of the parking lot also is open to the public, including Mubarak.

When cross examining PPS employee Kevin Mansr, who called the police and later Officer Thompson, Kreuscher and Nevill noted that both had assumed that the parking lot was private property, when in fact, it was public. It was an interesting moment if only for calling into question for whom the Portland Police work.  Thompson was quite clear Mubarak was trespassing, not because she knew the terms of the lease, but because she was told by Mansr he was trespassing.  Thompson was effectively giving the benefit of the doubt to both companies PPS and Venerable Properties, not Mubarak.

Rue, however, held that in the lease the City had clearly ceded authority over the general use of the parking lot to Venerable Properties, and that clearly Mubarak was not making use of the Mercy Corps facilities. 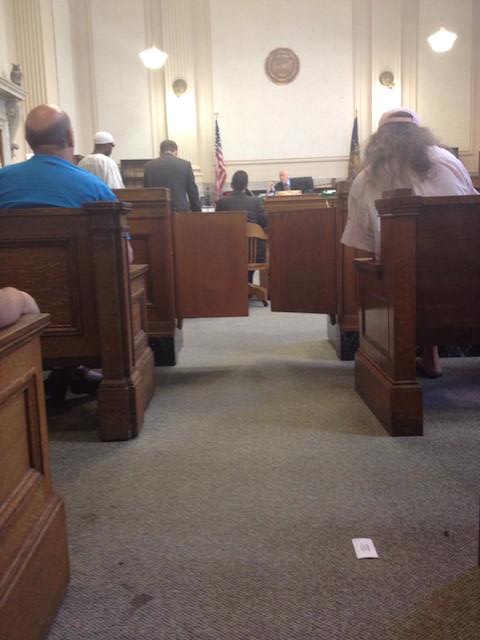 The jury came to a verdict after about 30 minutes of deliberation. Following the sentencing Judge Jones told Mubarak he had a responsibility to set a good example for the people who accompany him when he reaches out to people without housing, and that the “drama” he created in his conflict with Officer Thompson was in poor form and could have quickly turned “into a riot” that caused “harm for a lot of people.” He stated that Mubarak should have told Thompson, “I’m not going to leave, so you are going to have to arrest me.” Judge Jones also said that if Mubarak was to be arrested within the probationary period, but was arrested as he suggested he should have been on February 27, that would not be a problem. But if he was arrested while getting “into a scene with an officer,” then Jones would consider jail time, which could be up to two years.

Following adjournment, Judge Jones dealt with questions and comments from some of the 15 people who had come to support Mubarak. “Homelessness is a massive failure of our society and an embarrassment to our government.” Jones said, noting that he deals with numerous cases involving people without housing.

Regarding the efficacy of our justice system, Jones said he would like to see our system move toward mediation because “when you create winners and losers, in the long run, you create problems.”

Mubarak’s trial cast a brighter light than usual on those problems, including crucial questions regarding the privatization of public property and how that privatization affects the most vulnerable in society, including those people without housing.

Taken in isolation, the six minutes of video presented by the prosecution documenting Mubarak’s conflict with PPS and the police and his subsequent arrest, might make it appear that the police acted reasonably. The greater reality is that the police often act as a City force to terrorize the houseless in order to cater to business interests fearful of losing customers should they have to interact with those without housing.

In the winter police take houseless people’s possessions, such as blankets and tents. All year round they confiscate medications. They profile houseless people and people they perceive to be houseless, and consistently try to enact legislation, such as sit-lie ordinances, that criminalize houselessness.

Meanwhile Mayor Hales, who oversees the police bureau, acts like he knows nothing and the rest of City Council barely challenges him. As Mubarak has often noted (and perhaps he will now include the verdict against him) this is all a matter of people with housing looking down on people without housing. When those in authority take this stance it makes that much harder for citizens to see what is in front of them.

When Mubarak was arraigned on February 28 he stated that he was arrested while “trying to make people as comfortable as possible while sleeping on wet concrete,” asserting that he would plead not guilty because “the only thing I’m guilty of is showing compassion.” Since his arrest, he has held that while the trial centered on him, the real issue is the plight of people without housing–the losers of the system.

Following the verdict, Mubarak reiterated this idea saying he intended on continuing his work with the houseless community and saw the trial, regardless of the outcome, as a step forward. “The police were trying to stop me from doing what all people should do–help people in economic distress,” he said. “They accused me of not complying with a direct order. I challenged their authority, so they arrested me. I think we should always challenge people. How are we going to learn if we don’t ask questions. Win or lose, we should always fight back.”