You might not know that from the corporate media’s coverage of Israel’s assault on the people of Gaza. But they do have names.

And in death, a name and its acknowledgment is a reminder of humanity–of the deceased and the ones left behind, both those who knew the person behind the name, and those who did not.

On Sunday August 10 a crowd of over 300 people lined 500 feet of walkway at Portland’s Tom McCall Waterfront Park, site of the Bite of Oregon. Most people held signs bearing the names of some of the 1,900 people whom the Israeli military has killed since its most recent attack on the Palestinian people began in early July.

The event was not just demanding that Israel cease killing Palestinians. It also called for the US to stop it’s aid to Israel a figure that will reach at least $3.1 billion in fiscal year 2014. Without that aid, Israel’s capacity to continue its colonization of Palestinian land would be greatly hindered.

Serena Becker, who was holding a sign reading, “Stop Funding Israeli Apartheid,” said, “I am appalled at the complicity of the US government in the massacre taking place in the Gaza Strip as well as continuous military support the US gives Israel to keep the occupation in place.”

The pictures coming out of Gaza are appalling. And the response of the US political class has been entirely predictable, always centering on the right of Israel to defend itself–a right that does not exist for the people of Gaza. The Palestinian people, at least in the US corporate media are also being denied the right of narrative. Just like any other oppressed group, the wounded and dead of Gaza are to blame for their fate. The Palestinian children–or in some cases, the pieces of Palestinian children–were somehow asking to be blown into chunks of lifeless flesh that at times looked like some seared piece of meat that could have been served at the Bite of Oregon, with the head still attached.

Kifah and her two children, Faris and Layla, attended the rally. They are from Jerusalem. Both Faris and Layla said they were at the rally because “Israel is killing children in Gaza and Palestinians” and that they wanted to stop it.

“People need to know that there’s something going on back home,” Kifah said. “They need to let people know here in America that there are people in another part of world dying and losing their homes. We need to do something. That’s why we are here with our kids. We need to stop supporting with our tax money this occupation. Every day tens or hundreds are killed over there in cold blood.” 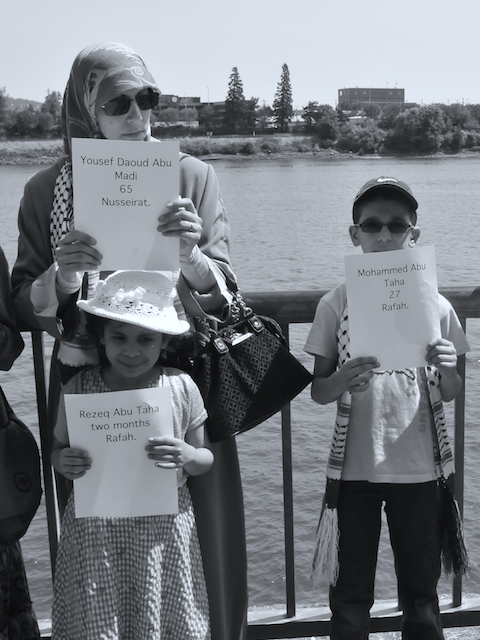 Echoing those sentiments, three prayers were led, one each by a practitioner of Judaism, Islam, and Christianity. Each prayer was a call for an end to the bloodshed, a reminder to those gathered that they had much more in common than not, and that they were bound together as people. It was also a not-so-subtle admonition to those who erroneously equate criticism of the actions of the state of Israel with anti-Semitism.

Peter Miller of Americans United for Palestinian Human Rights noted the contradictions of US policy in the Middle East. “We are bombing people in Iraq to stop genocide,” he said, “and arming people in Israel to commit genocide.”

Ahjamu Umi of the All African People’s Party noted that “the Zionist movement was founded on the backs of the African people.” By that statement he was referencing the diamond trade and Israel’s position as a leading producer of cut and polished diamonds. “The diamonds that are refined in Israel have come from the mines of Southern Africa since 1948. The industry is highly exploitative in many ways.” The export of these “blood diamonds” from Israel adds billions of dollars to Israel’s economy–money that helps finance Israel’s illegal occupation and colonization of Palestinian land, and its inhumane treatment of the Palestinian people.

“Israeli made guns, like the Uzi, have financed Zionist development while flooding African and other poor neighborhoods for decades,” Umi said, urging people to join groups that are“anti-Zionist, anti-settler, and anti-colonial,” and to make sure any groups to which they currently belong have this calling in their platforms.

Muhammed, a man from the West Bank, spoke movingly about the push for justice for the Palestinians as well as the role the US can play in that movement, if its citizens are willing to stand up. “If we have some people who were killed, we also have some people with hope who want a free Palestine. Peace has to happen and you Americans have a strong power to create this peace.”

It appears that change may be on the way, in the form of young people. According to Gallup, while 55% of US citizens over 65 believe Israel’s actions in Gaza are justified, 51% of those between 18 and 29 believe the assault is unjustified. “Americans of all stripes are waking up,” Ned Yost told the crowd. “Many Jews are waking up. To be Israel as it exists requires siege, war, and massacre.”

Regardless of poll numbers, over 1,900 people–including 450 children–from Gaza are dead. They have been killed by members of the Israeli military, on orders from the Israeli government, using US military hardware, courtesy of US citizens’ tax dollars.

“Each was a person with hopes and dreams,” Yost said.  “A person who loved and was loved.”