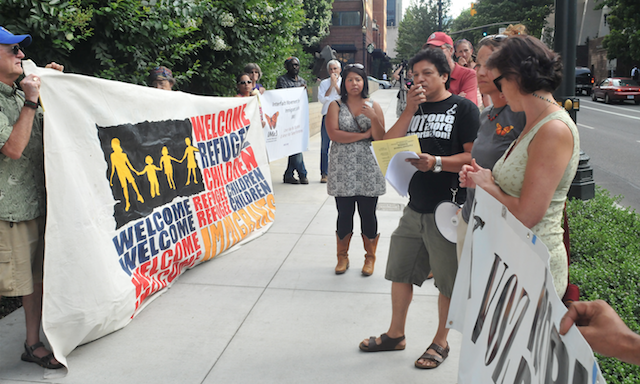 A crowd of 50 people gathered outside the Federal Building in downtown Portland on July 31 to demand an end to the deportations that have torn apart so many immigrant families. Those deportations have also engulfed children who are fleeing violence in Central America–much of it induced by US foreign policy–particularly from El Salvador, Guatemala, and Honduras.

The United Nations has been pushing for the US to treat many of the children and families crossing the border as refugees fleeing armed conflict; however, President Obama, while hardly reaching the level of vitriol that has engulfed right wingers, has not taken concrete steps to alleviate the crisis.  A few weeks ago, photos taken inside immigration prisons showed overcrowded conditions including large numbers of children sleeping on concrete floors.  Other reports have detailed children as young as 3 being held in jail cells.

Kicking off a nationwide week of action, the Portland rally was one of many that occurred as anti-immigrant fervor–or more accurately, hatred directed toward immigrants from Mexico, and Central and South America–has increased. Marco Mejia of Jobs with Justice described the weeklong actions as “civil disobedience, fasting, and praying to pressure the system” so as to achieve justice for immigrants and make President Obama cease the deportations that have surpassed 2 million under his watch. “We need to stop breaking families apart,” said Mejia. “We need to stop persecuting people, and we need to stop jailing and deporting little kids.”

As people from Central American countries whose political systems and economies have been devastated by US foreign policy have sought refugee status in the US, the rancor against them has finally been noticed by the corporate media.  Responses from some segments of the US citizenry, such as seen in July in Murrieta, California when a group of protesters turned back buses bearing immigrants fleeing violence in their home countries who being taken to a supervised release program, bear a marked resemblance to the ugliness seen during the Civil Rights Movement of the 1950s and 1960s.

Trade policies such as the North American Free Trade Agreement (NAFTA) and the Central American Free Trade Agreement (CAFTA), despite the rhetoric surrounding them, have quite predictably not helped raise the economic circumstances of most people–save for the already wealthy–but the effects have been particularly pronounced in Mexico and Central America. While these FTAs have created a system where capital flows freely across borders, it has likewise tried to make those borders impermeable to labor.

The United States also has a long history of supporting governments in the region that while friendly to US business interests, are highly unpopular with the citizens they should be serving. On the occasions when the people of those countries decided they’d had enough, the results proved devastating. The civil war in Guatemala saw upward of 200,000 people killed or disappeared between 1960 and 1996, with much of the killing occurring during the 1980s when the Reagan Administration sent millions of dollars in military aid to the Guatemalan army. Likewise, the Salvadoran civil war–in which popular repression by the military was supported by both the Carter and Reagan Administrations–resulted in the death or disappearance of over 75,000 people according to the United Nations. Many of the scars from these wars have not healed. 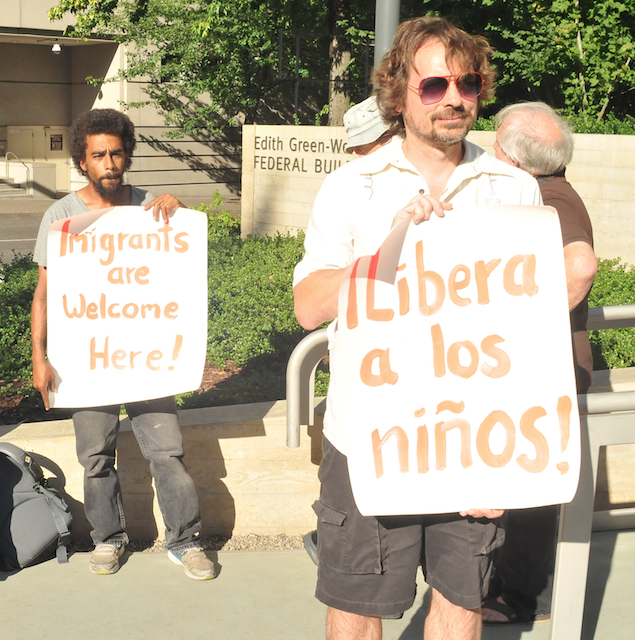 More recently, in June 2009, a coup in Honduras ousted democratically elected President Manuel Zelaya. That coup was supported by the US. Honduras, the site of numerous human rights violations, now has the highest murder rate in the world.  Much of that rise is due to drug related violence, a direct result of the United States’ drug war compelling drug cartels to reroute their supply lines through the country, as well as associated gangs fighting to take over the new turf.  And on the old turf where some cartels have been broken up, smaller gangs filling the void because while the cartels are gone, the drug war has done nothing to diminish the demand for drugs.

Francisco Aguirre of VOZ told the crowd about his son who spent 4 months in detention and is now set to be deported. Aguirre’s son was “running away from violence the United States created in El Salvador.” He said that many children there are fleeing gang violence that has resulted from the poverty so-called free trade policies have created as well as the rifts that remain from the civil war. Despite this, Aguirre’s son was not offered the opportunity to apply for refugee status. “They are refugees,” said Aguirre. “They have the right to go where they want. They should be freed.”

According to the Pew Hispanic Center the number of unaccompanied migrant children apprehended at the US border between October 2013 and June 2014 nearly doubled in number over the previous year. Seventy-five percent of those children come from Central America.

In short, people are not leaving their homes in Central America–or Mexico and South America–because they want to. Rather, they have to leave because survival has become impossible. That impossibility is a direct result of US policy. Yet, as Mejia noted, these people who are victims, are being treated as perpetrators. “We live in an upside-down world,” he said. “We are always blaming the victim.”

Axkana, a student without documentation at Portland State University (PSU), described himself as “an example of millions of stories.” He came to the US at age seven with his parents who were seeking a better life. He and his two siblings now “pretty much call this place our home.” Like most other people without documentation, Axkana pays taxes, but does not receive many of the benefits documented taxpayers receive. People without documentation can attend public schools and receive emergency medical treatment, but they are denied welfare and food stamps, and they receive almost no Social Security benefits.

According to the Partnership for a New American Economy, if DREAMers–those nearly 1.8 million immigrants who for the most part meet the requirements put forth in the Development, Relief, and Education for Alien Minors (DREAM) Act, a bill that has been proposed numerous times, but has never passed through Congress–became citizens, it would be a boon for the US economy.

Still, lies persist, such as the notion that immigrants come to the US and those lies inform the political battles surrounding immigration.

There is no chance of any immigration reform legislation passing out of Congress this session. It already appeared dead in the water when the two bills on the table appeared irreconcilable. The Republican controlled House of Representatives version focused on punishment, while the Democrat run Senate bill read like a call for indentured servants. But in a nod to the proud and loud racists of their party, the Republicans in the House pushed through a bill on August 1 that would end President Obama’s Deferred Action for Childhood Arrivals (DACA). The new bill–which has no chance of passing in the Senate–effectively nails the Republican Party’s immigration principles to the door: deport them all.

For months now, immigrant rights groups have been pressuring Obama to use executive action to stop deportations, and now they are demanding he also deal immediately, lawfully, and humanely with the child refugee crisis. Not so long ago, it seemed a shoo-in that the Republicans would take back the Senate in the November elections. That is not so obvious an outcome now with the Republican Party so blatantly displaying its racism. With the Tea Party wing of the party holding so much power to determine primary winners, Republican candidates must appeal to them.

So Obama may have a little more leeway on the issue, and true to his conservative political instincts, he is not doing much. By failing to act, he runs the risk of alienating Latino voters who have become a sizable portion of the Democratic vote in recent years.  Even with the Republicans seemingly doing all they can not to take over the Senate, in some senate races Latino support could determine the outcome.  Obama’s actions will depend on how secure he feels in the Democrats chances to hold the Senate.

Mejia noted that this fight has been going on a long time. He urged people to continue educating others and applying pressure. “We cannot just talk about justice. We need to do something about it.”