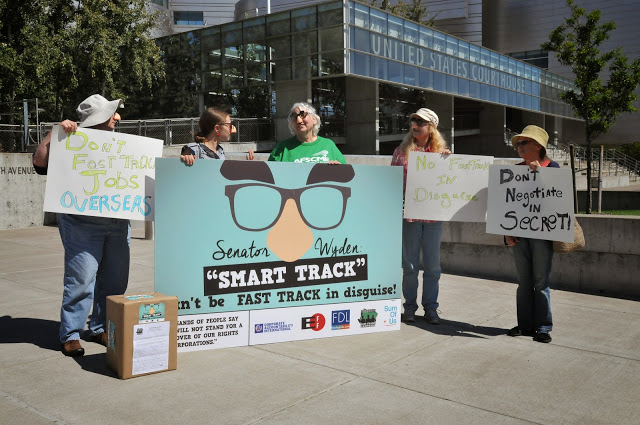 Fast Track, which is used to ease the way for  passage of trade agreements such as the North American Free Trade Agreement (NAFTA), was expected to be passed in January and thus open the door for the Trans Pacific Partnership (TPP)–a measure involving the US and 11 Pacific Rim countries that is poised to dwarf NAFTA both in scope and impact. That January attempt failed due to massive pressure from people opposed both to the devastating results of FTAs, as well as congressional unwillingness to hand over so much power to the president.

Wyden, who chairs the Senate Finance Committee, has announced plans to replace Fast Track with what he is calling “Smart Track,” but many activists worry it will be the same legislation with a new name. They have good reason for concern, as Wyden has consistently and exuberantly expressed his support for FTAs despite statistics that show these trade deals are not only bad for US workers, but for people in other countries signed onto them.

According to a study by Public Citizen, the US has experienced a net loss of 1 million jobs, decreased wages and an increase in inequality in the two decades since the passage of NAFTA. According to the Oregon Fair Trade Campaign (ORFTC), over 75,000 Oregonians have lost their jobs since 1994–a far cry from the soaring rhetoric promising prosperity that accompanies every proposed FTA. To give one example of the damage FTA’s can do, Elizabeth Swager of ORFTC said that after the passage of NAFTA, the flood of cheap corn from the US into Mexico displaced 2.5 million Mexican farmers.

“Fast Track is the lynchpin in the fight against the TPP,” Swager said.

In trying to make the passage of these trade arrangements easier, Fast Track ties the hands of members of Congress. It allows no amendments and limited debate on trade legislation and senators and representatives can only cast an “up or down” vote. While supporters of Fast Track say it allows trade bills to pass when they otherwise would get bogged down in congressional negotiations, detractors note that it subverts democracy by giving citizens virtually no voice. In addition, legislators can hide behind the excuse that they passed a trade agreement like NAFTA because, even though it contained material that would clearly hurt their constituents, they did not want to jettison the whole deal. 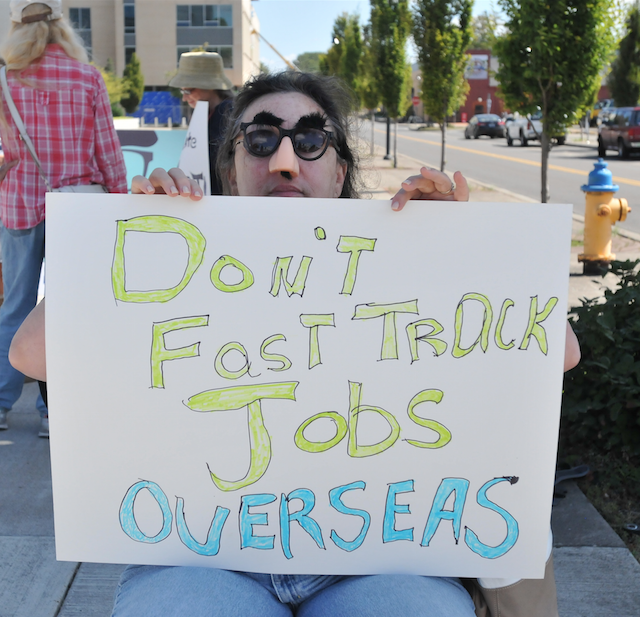 In derailing Fast Track early this year, it became clear that the American public understood this ruse. Thus Wyden is looking to change Fast Track, or at least give it a nicer image. But will Smart Track be any different than its predecessor?

In the bigger picture, their similarities and differences do not matter much. The purpose of Smart Track will be the same as Fast Track: to pass the TPP. The TPP, which has been described as NAFTA on steroids, is currently being negotiated in secret. Even government bodies such as the US Congress find it difficult to access its contents. What the public has seen of the TPP comes from text leaked through Wikileaks. Since negotiations are conducted largely by corporate representatives, it should come as no surprise that those leaks reveal a document that has little to do with free trade, focusing instead on maximizing the profits of multinational corporations.

Whether allowing corporations to subvert US environmental laws or granting patent rights to pharmaceutical companies that would severely restrict the production of generic medicines needed by so many, the TPP–like its predecessors–values profit over people.

Fast Track, and thus the TPP, was stopped through popular resistance earlier this year. Every Oregon Democrat–including Wyden–ended up opposing it because of the constant pressure applied through actions, phone calls, letters to the editor, and emails. The message of the pressure was this: if you really care about Oregon’s workers, you will not support Fast Track.

“We all know that Fast Track is an undemocratic process that allows harmful trade agreements like the Trans-Pacific Partnership to be sped through Congress without ordinary review, amendment, and debate procedures,” Swager said.

“Fast Track is outdated and inappropriate for modern trade agreements, and certainly needs to be replaced. However, we don’t know what is in Smart Track since Senator Wyden’s bill is not yet drafted. It could become a means for advancing democracy and accountability in trade policymaking. But we’re worried that without constituent input, Smart Track may just become Fast Track in disguise.”