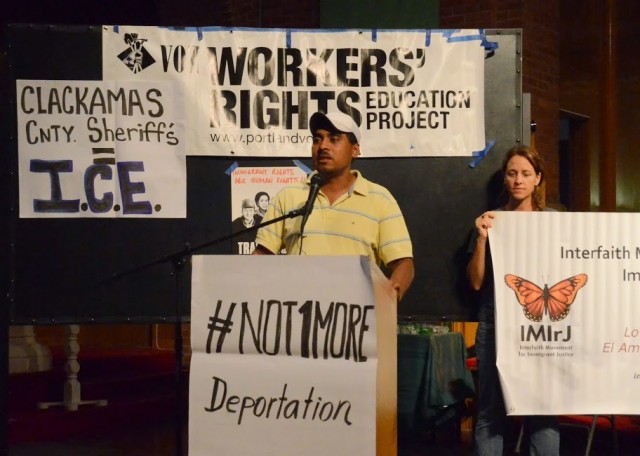 Francisco Aguirre became alarmed when 12 federal agents appeared at his Fairview, OR home at 7 AM on September 19. They refused to state the purpose for their visit, but, when pressed, the lead agent said it had something to do with Aguirre’s business. Aguirre found it suspicious that a dozen agents were interested in his small computer repair company, so he asked for paperwork to back up the claim.

There was no paperwork. The agent was lying. The agents were from Immigration and Customs Enforcement (ICE), there to take Aguirre into custody. Aguirre stood his ground and asserted his rights, saying they could not enter the house without a warrant. The lead agent said they would wouldn’t leave until taking him into custody. But Aguirre, who had recorded most of the encounter, refused to be intimidated. He closed the door and locked it.

The immigrant and immigrant rights community quickly swung into action to help defend Aguirre, who has been taking sanctuary at Augustana Lutheran Church in Northeast Portland for over a week. Aguirre receives protection not only from the church, but from friends and community members.

The Augustana Lutheran congregation and its Pastor Mark Knutson have welcomed Aguirre with open arms. Knutson cut some of his teeth protesting the Dirty Wars in the 1980s; he espouses the liberation theology of those Central and South American priests, bishops, and theologians who believe Jesus’ admonitions to minister to the poor and achieve justice for them were meant to be acted upon, not just spoken. Knutson often speaks out on behalf of the downtrodden, and has been a vocal presence at many immigrant rights events.

Since receiving sanctuary, Aguirre has been heavily featured in local and national media. Some reports read as if the reporters are on the ICE payroll. When ICE began raiding businesses in the mid-2000s, the sight of families being torn apart–families that people knew and loved as friends and members of the community–horrified people. Consequently, ICE began spreading racist propaganda–which much of the corporate media adopted without question–that equated people without documentation with drug dealers, rapists, and murderers, even though about 80% of ICE detainees have been taken in for minor infractions like traffic violations.

Some of the propaganda about Aguirre has focused on his past. In the late 1990s Aguirre was arrested and charged with drug-related crimes. Aguirre denies the drug charges, saying he thought he was helping two people without housing who needed a place to stay. All but 2 of the 20 charges were dropped, those two relating to trafficking. Not understanding the legal system, Aguirre pleaded no contest, believing that he was declaring his innocence.

As a result of his plea, Aguirre was deported, only to later flee the violence of El Salvador and return to Portland without documentation.

Back in August Aguirre was pulled over for suspicion of driving under the influence, a result, he says, of drinking two beers. It is this incident that brought the 12 ICE agents to his family’s door.

Aguirre has been in the process of applying for a U Visa, which is available to immigrants who are victims of serious crimes and who have cooperated with authorities in prosecuting the crimes. That application has effectively been put on hold because of ICE’s threat to detain Aguirre. While these past charges against Aguirre are serious–and some of them possibly unfounded–focusing on them instead of the larger picture as to why Aguirre migrated to the United States, obscures a reality that the corporate media as well as the US government desperately avoids. 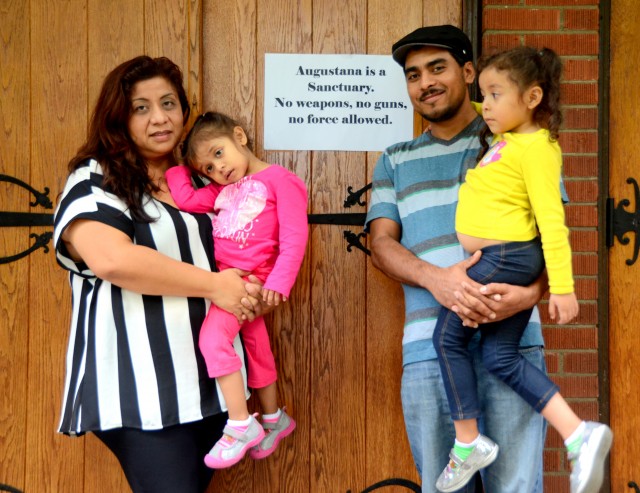 Over the past few months, scores of unaccompanied children, as well as children with mothers, have been amassing at the Mexico-US border. Many are fleeing violence in their home countries of El Salvador, Honduras, and Nicaragua. That violence did not appear out of nowhere; it is largely the result of US foreign policy. The Dirty Wars of the 1980s and the Drug War, as well as erroneously named free trade agreements, have all contributed to destabilizing governments whose reach is often short. Where government power is limited, drug cartels and others have stepped in to rule, again using violence to achieve both their goals and whims.

Like so many others, Aguirre fled to the US to escape that violence.  In many cases, such as Aguirre’s, and those in Artesia, New Mexico, the US government is trying to suppress due process and return people to that violence as quickly as possible.

“We immigrate,” Aguirre says. “But we didn’t choose it.”

For months President Obama vowed he would circumvent Congress to provide justice for immigrants. As all too often happens with politicians, the words were comforting, but ultimately hollow. Obama has failed to deliver, and he has failed most cravenly–refusing to act out of fear of hurting Democrats’ chances of holding the Senate in November. But it would be false to say Obama has taken no action: There have been over 2 million deportations on his watch. Families and communities have been torn apart, there are reports of intimidation at ICE prisons, such as forcing immigrant prisoners to sign papers of self-deportation, and the travesty of Artesia have unfolded during the Obama presidency.

The political can be extraordinarily personal. I have known Francisco Aguirre since 2002 and am proud to call him my friend. We met through mutual friends, who were visiting him after he had broken his arm in a bike accident. Aguirre needed some money to pay for his bills, so we lent it to him. Not that it matters, but we got the money back in short order.

I would later see Aguirre about town at various rallies, speaking out on behalf of people without documentation, as well as supporting economic justice and justice for people without housing. I knew of his work organizing day laborers, something he began soon after his 1995 arrival in Portland, having fled the violence in his native El Salvador. He would later go on to be involved with the Workers Organizing Committee and help to found the VOZ Workers Rights Education Project. Currently, Aguirre is the coordinator of the Martin Luther King, Junior Worker Center on SE Grand.

Aguirre has two daughters, 3 and 4, who are US citizens. Like any parent, he wants the best for them, and he believes that best is to be found here in the United States. But if he is deported, they and his wife will follow him to El Salvador. “That will force my kids,” said Aguirre, “to be in a country where they don’t belong, in a country where their lives will be in danger. It will hurt their opportunities.”

The Sanctuary Movement of the 1980s provided refuge for those people fleeing the Dirty Wars begun under President Carter and amped up under President Reagan. Those wars resulted in tens of thousands of dead and disappeared. Three decades later, Augustana Lutheran Church is one of about 300 houses of worship in the country that provides refuge for immigrants currently being hunted down by the US government.

This current permutation of the Sanctuary Movement is one of many movements and organizations that has helped contribute to immigrant rights victories. Many states and counties now refuse to cooperate with ICE or have set limits on when they will cooperate. In April, Judge Janice Stewart of the United States District Court in Oregon ruled that the Clackamas County Sheriff’s Office violated Maria Miranda-Olivares Fourth Amendment rights when it honored an Immigration and Customs Enforcement (ICE) detainer despite lacking probable cause. That resulted in a torrent of Oregon sheriff’s offices saying they would comply with the ruling.

Those victories were not handed down from above. They were gained by  a commitment from people who stood up and demanded justice for their families, friends, neighbors, and community members. They fought and have kept fighting. Working together, citizens can force ICE and the government to back off and put an end to the threats to Francisco Aguirre. We can put an end to all the deportations by continuing to stand up against ICE and a government complicit in creating the horrors from which refugees must flee in the first place.

Aguirre is in good hands, but he is not necessarily safe. Friends and community members keep watch on him 24 hours a day.

Help is pouring in. A petition is circulating demanding ICE allow him to complete his U Visa application. Community members are providing food and an account has been set up so people can donate money to help his family pay the bills.

1. Sign the petition showing your support for Francisco Aguirre, and let ICE know you are watching it. History shows ICE does not like it when its inhumane actions are made public. The petition is at: http://www.notonemoredeportation.com/portfolio/franciscoaguirre/

2. Contribute to the fund to help Francisco’s family pay its bills while Francisco is unable to work. You can donate at: http://www.gofundme.com/errcpw

3. Join or support a group fighting for and educating about immigrant rights such as the Portland Central America Solidarity Committee and VOZ.

4. There will be an interfaith service and community rally tonight at Augustana Lutheran Church, located at 2710 NE 14th Avenue, Portland, in support of Francisco Aguirre, and all refugees and immigrants.  Doors open at 6PM, and the service starts at 7PM.  For more information go to: https://www.facebook.com/events/841673435851074/