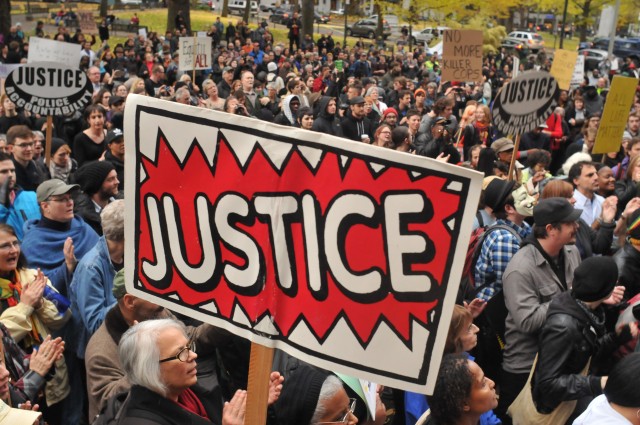 Protests and others actions, ranging from peaceful gatherings to more militant non-violent marches, as well as the rare–but widely reported by the corporate media–examples of rioting and looting, began around the country on November 24 in the wake of the failure of a Ferguson, Missouri, grand jury to indict Officer Darren Wilson in the August killing of Michael Brown.

On November 25 the Albina Ministerial Alliance (AMA) Coalition for Justice and Police Reform held a peaceful city-sanctioned demonstration in Portland. For about 90 minutes speakers told a crowd that eventually reached 4000 people in front of the Justice Center that they must continue to seek systemic change. They then proceeded on a short march through downtown Portland.

After returning to the Justice Center, Dr. Reverend LeRoy Haynes of the AMA asked the crowd to leave peacefully, and that if people wanted to engage in their own actions, they do so in a manner that would leave a clearly defined line between their events and the AMA action. The request, though fair enough, pointed to the tension that exists for far too many protesters who come out to chant, “No justice, no peace!” only to find that despite a clear lack of justice, there is still peace for their oppressors. For those few thousand people who wanted something more confrontational out of the day, attention turned to a more militant action–something that would stress the system.

There was a power struggle of sorts, with one protester exhorting people to “shut it down now.” People involved with the AMA rally began singing “We Shall Overcome”, which seemed an attempt to drown out people looking to organize a subsequent action. One young Black man then yelled out, “How is singing going to keep me from getting shot and killed tomorrow?” an understandable question, coming in the wake of a rally that at one point saw outgoing police chief Mike Reese, incoming police chief Larry O’Dea, and Mayor Hales’ spokesman Dana Haynes mingling with the crowd. 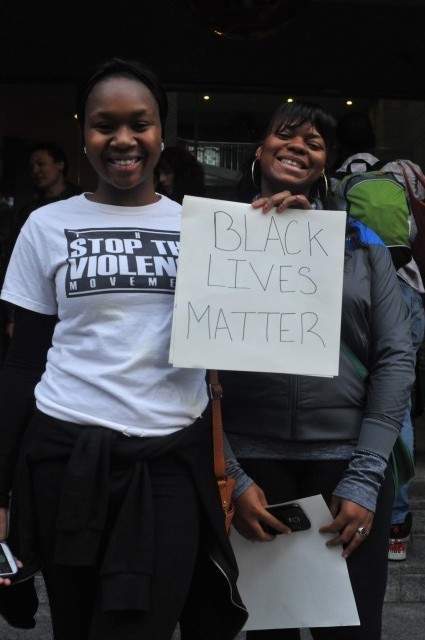 Many in the crowd were also incensed about a recent incident where three Portland police officers–Kris Barber, Rob Blanck, and Rich Storm–posted Facebook pictures of their badges with a ribbon reading, “I am Darren Wilson”. Those pictures were “liked” by 19 other Portland police officers, and even though Reese demanded the pictures be removed, for many it was another reminder that the Portland Police Bureau is a racist institution not held accountable for its actions.

Very quickly, a new march developed, composed of about two to three hundred people who headed toward the Morrison Bridge, keeping largely to the sidewalk as enforced by a brigade of police on bicycles and motorcycles. The crowd was met by a clutch of riot police at the bridge, who formed a lined across it. The protesters continued to Burnside, marching across that bridge and eventually flowing off the sidewalk and shutting down Grand Avenue and Martin Luther King Jr. Boulevard for short spells. On at least one occasion, a police officer used his motorcycle to assault a marcher.

People continued marching down MLK to the Morrison Bridge, with some venturing onto Interstate 5 for a few minutes, and the majority crossing the Morrison Bridge back into downtown Portland where the rally closed in Waterfront Park. Some arrests were made and chemical weapons (pepper spray) was deployed against protesters.

Unlike the AMA rally, this one used civil disobedience as a tactic, shutting down streets and bridges and occasionally getting police to do that for them, which achieved the same net effect. This group of mainly young people was not out of control. Their movements and actions were purposeful, and they forced the City to expend resources. These were acts of disruption, not acts of violence.

Quite predictably, corporate media decried any actions that went beyond the type of peaceful rally held by the AMA. For example, Kelly House of OregonLive.com declared a “rift”, writing “Tuesday’s dueling Ferguson protests were a tale of two movements.”

This is wrong, and it is an all too-typical framing that conflates different tactics with different movements. In a general sense, both rallies had the same goal: stop police from brutalizing and killing Black people. And that more or less is what this movement is about. It is, of course, a generalization, as people have different ideas about what a world where police are not hurting and killing Black people–or any people–looks like. Is that one in which the current PPB wears cameras at all times? Is it a PPB that has a complete makeover? Is it one that that is subject to rigidly enforced rules of conduct and severe consequences for violations? Or is it a series of communities policing themselves with no interference from the PPB, because that racist institution has been abolished and replaced with something else not based on racism and violence?

Some people believe in using peaceful means aimed at working the system from the inside by influencing politicians through the ballot, and others believe more militant actions are necessary to stress the system from the outside to bend power to their will. And many see both as necessary. The two rallies are part of the same movement, not two separate movements. There is nothing new in this, at least if you read history that has not been sanitized. Chattel slavery was not ended in this country solely by peaceful means. The Civil Rights movement was not a completely peaceful movement. Militant acts played large and influential roles too, and those militant acts were almost all non-violent, save for the intervention of police forces who brought down state violence on demonstrators. 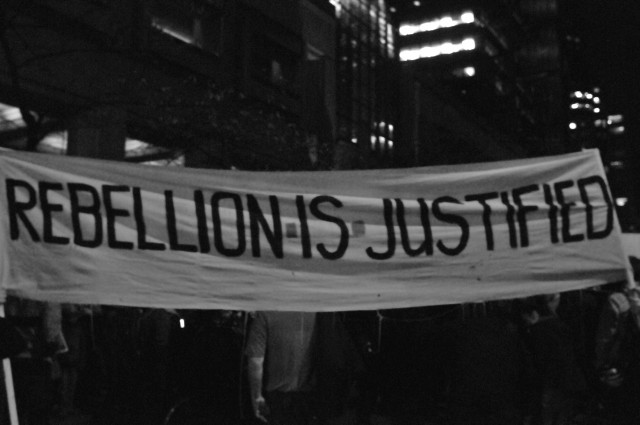 This dynamic was again on display during a November 29 march that involved about 700 people. The unpermitted march wound through downtown, sometimes taking the streets.  At one point the police began beating people and even fired concussion grenades at close range into the crowd.  Walking in the streets and disrupting traffic is a nuisance–an act of civil disobedience–but it is not a violent act.  Punching people and hitting them with nightsticks, and shooting concussion grenades into a crowd, however, are acts of violence.

Of course, people in power decry more militant actions. This fact should be instructive to protesters when they seek to challenge the powerful, who have a distinct interest in making sure the system continues running smoothly.

In the end, both rallies did what they set out to do, challenging police violence and the racism at its core. But the most important outcome of Tuesday’s rallies–and completely missed by the corporate media–occurred in the second one. That march consisted of a higher percentage of Black people than I have ever seen in a rally in Portland. More importantly, the march was led by young Black people, something too rarely seen.  The rally on November 29 also was led by young Black people.

It is essential that white people–many of whom do important organizing work and support this movement–acknowledge that the leaders of this movement must be Black people. If we really want to see an end to police brutality and violence, white people must be willing to use their privilege as allies–stepping up when needed for support, but also stepping back to allow Black people to lead the movement. White people cannot be the ones to direct what Black people should do to find justice in this movement because they are not the ones being extrajudicially killed every 28 hours by police, security guards, and vigilantes.

A successful movement can be occur through both AMA and groups committed to more militant forms of resistance. It can be done all across the spectrum with an acknowledgement that a movement is composed of many groups whose tactics–and even ends–are going to differ.