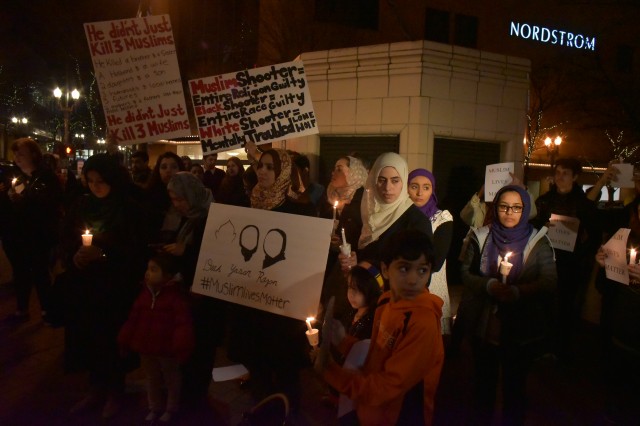 A Valentine’s night vigil was held in Portland’s Pioneer Square to reflect upon the lives of three young Muslims murdered in Chapel Hill, North Carolina, on February 10. Over 100 people held candles in memory of Deah Barakat, Yusor Mohammad Abu-Salha, and Razan Mohammad Abu-Salha and to stand in solidarity with their families and community. Barakat, 23, and Yusor Mohammed Abu-Salha, 21, had recently been married. Razan Mohammed Abu Salha, 19, was Yusor’s sister.

The events of the past few days—both the horror of the murders and the uplift of support from Muslims and non-Muslims worldwide—have shown Sophia Kinhnarath, one of the organizers, “a lot of sadness, confusion, and pain, but also the power of the Muslim community. Kinhareth said Barakat, Abu-Salha, and Abu-Salha were “most of all like you and me, living in America, trying to be the best they can be…their character, their legacy for service, and their true spirit of Islam will live on.” The three were by all accounts very decent people and well-regarded, inspiring members of their communities.

Following Kinhnarath, the microphone was left open. Some people talked about their experiences as Muslims, ranging from the callings of their religion to the feeling of community they felt this night among so many allies. Some non-Muslims spoke of their kinship with Muslims, emphasizing the ground level similarities of their religions’ demands for a more just world for all, or–for those who did not follow any religious creed–the commonalities of life and love of those with whom it is shared.

One woman sang a Q’ran recitation. The language of the lyric did not matter. The melody, carrying those intervals of Arabic music that give it its majesty, expressed in its own language why people had gathered in this space.

A young man noted that Barakat, Abu-Salha, and Abu-Salha were “victims of robbery, the worst kind of robbery: life.” He added, “The people here are gathered to show what it means to be human.”

Another woman urged people to recognize what they have in common. “We’re only different by skin. We have the same hearts, same brains. We’re all looking forward to move along in this life.”

A man in his early twenties observed, “These people didn’t die because of the bullets, but because of hate. Because they were Muslims.”

“I understand the struggle of being Muslim in America,” said a female teenager, who often faces questions at school for wearing a hijab. Though she does not see it as a terrible burden, the questions single her out as someone who stands outside at least some people’s concept of community.

“I don’t know why people do this,” said an adolescent male, “but it’s really sad. We’re all the same.”

A clear theme of the vigil was the need for understanding and compassion. This is a far cry from the calls for tolerance which ask people—presumably white, and as it relates to religious matters, presumably Christian—simply to put up with others who are different. This was about loving and respecting people, not in spite of their differences, but simply because they are people, wondrous and wonderful in their differences.

There was also an understandable undertone of fear.

“We came here tonight,” said a young woman, Madina, prior to the vigil, “because we want to make a statement to honor those who passed and to draw awareness to this issue, Islamophobia.” Madina and her friends Tahmina and Hajjar had been making posters at their mosque the night before the event. As they were getting ready to leave, they noticed a car in the parking lot with “a guy flashing his lights for 20 minutes.” Madina called the police, and the women were escorted safely to their cars.

The Chapel HIll murders “really hit home because we could really relate to them,” Madina noted. “Young, Muslim, college students contributing to something larger than themselves. It really could have been any of us.”

The victims were murdered by Craig Stephen Hicks, 46, who on his Facebook page embraced an anti-religious stance. A quick perusal of the coverage of the killings shows many members of the Islamic community expressing their belief that Hicks acted out of hatred toward Muslims. After all, Hicks had run-ins with other people in the apartment complex in which he lived, but the only people he murdered were these three Muslims.

Anti-Muslim hysteria has ebbed and flowed in the United States for at least the past 30 years. President Ronald Reagan once declared a war on terror, and in the 1980s terrorists—always defined as Middle Eastern Muslims—became a staple of popular culture in the US, further fanning the flames. The attacks of September 11, 2001 brought Islamophobia and anti-Muslim crimes in the US to new heights, and anti-Muslim attacks have continued with regularity since then.

Corporate media outlets commonly maintain a relative silence to many attacks, The Chapel Hill murders were barely covered until nearly a day later, which would be difficult to imagine happening if three Christians were murdered by a Muslim.

The use of language also remains inconsistent across crimes. When a Muslim kills anyone, he is a terrorist committing an act of terrorism, but when a white person kills– even if it appears clearly directed at a particular group of people such as Muslims–he is almost never labeled a terrorist. Because he is white, he will be spoken of in individual terms such as deranged or lone wolf. If he were a person of color he would likely be described in terms that conflates his guilt with all members of his race. 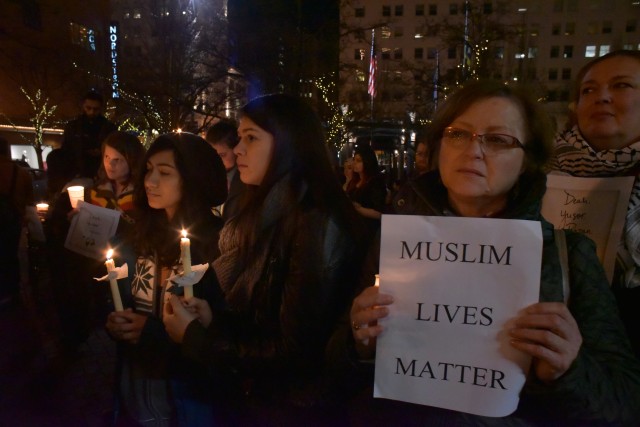 For example, following the September 11, 2001 bombings, and more recently the murders at Charlie Hebdo, there were demands that Muslims condemn these crimes followed by denunciation of the Muslim community for not doing so. Never mind that Muslims did in fact condemn the crimes. Who outside of the perpetrators would not? The point is that Muslims as an entire group are expected to repent and atone for the sins of an individual. So far, there have been no calls (other than satirical) for all white people in the US to condemn Hicks for what surely looks like an act of terrorism.

“The problem here,” said Madina, “is that people are afraid to call out white privilege and white supremacy.”

Ultimately these issues point up the often hidden foundations of white supremacy and, as much as anything, Saturday’s vigil was a challenge to a deeply systemic problem.

“Seeing the support from all communities to honor Deah, Yusor, and Razan was beautiful,” said Kinhnarath. “The unifying of communities gave a sense to Muslims that we are not alone. But we still have a lot of work to do to not see another tragedy like this happen again. We need to challenge ourselves to understand that this is not a problem that we are facing alone, but it affects all people of color. We need to contribute and collaborate within those communities to create a better world for all people.”

At the edge of the crowd, a woman named Hanan handed out synthetic roses to passersby, each attached with a “message to embody truth” taken from the Q’ran. The words were hardly Islam-specific; rather they were the same truths of love and justice so often found at the spiritual heart of most religions and of a good many people who are not religious.

“I want people to know you’re not defined by religion,” said Hanan.  “There’s more to Muslims than religion.”