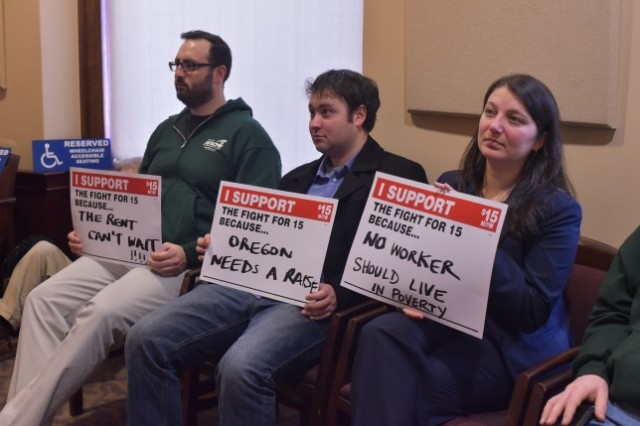 With a unanimous vote, the Portland City Council on February 18 approved a resolution updating the City’s Fair Wage Policy to a $15 per hour minimum. Its passage will affect over 100 janitors, security guards, parking attendants, concessions workers, and others who work for companies that contract with the City. The decision also directs the Bureau of Human Services to develop a plan to assess the level of compensation for part-time workers.

The resolution is a victory for the 15 Now PDX campaign which, with the help of Jobs with Justice, has been pushing for a 15 dollar minimum wage for almost a year, and it is a bigger triumph for those who will gain from it. Linda Sporer, who works at the Portland Building, remarked about her imminent raise., “As a security officer, I have a serious responsibility to keep people safe. When I get home, I have an added responsibility to do everything I can to support my family. This wage increase will make a real difference, giving me the resources to get ahead instead of barely getting by.”

Along with the relentless organizing of the 15 Now PDX members, the raising of the minimum wage gained much steam last summer as a major point of Nick Caleb’s campaign to unseat commissioner Dan Saltzman. During an event for Equal Pay Day last April, Saltzman was peppered with questions from 15 Now PDX supporters about his stance on raising the minimum wage. Saltzman hemmed and hawed, saying if re-elected he would lobby the state legislature to change the current law which prevents Portland and other locales from raising the minimum wage outside of that for government employees and people working for contractors doing City business. At the time, Caleb said, “We can act in this city right now on raising the minimum wage. Appealing to the state legislature is a total punt and fails to give working people the attention they deserve from our elected officials.”

In June 2014, Justin Norton-Kertson, co-founder of and an organizer for 15 Now PDX, presented the council with over 1000 local signatures in support of a $15 an hour minimum wage. When he asked if any of the commissioners wished to endorse the wage raise, all demurred.

Now eight months later, Saltzman has brought forward a successful resolution. Most telling about the hearing was not the question of whether it would pass–that appeared to be a given—but to how many people it would apply. It was a testament once again to the power of working people to force the hand of those in power and an important victory for workers in Oregon.

“The Fair Wage Policy here in Portland is the first step in raising the minimum wage to $15, not only for all City workers, but for all who live and work in Portland,” said Tamara Kneese of 15 Now PDX. 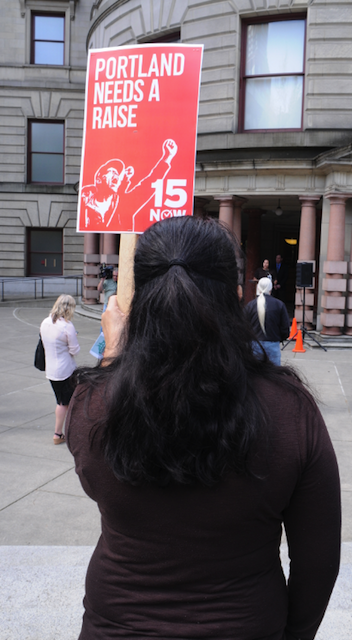 For those who benefit from the wage increase, the gains will be significant. Anne McDonald, a part-time employee at the Oregon Zoo, recently earned a wage increase to $19 per hour, but still testified on behalf of other workers making less than her. She described the liberating feeling of making a wage that gave her a sense of living in dignity. “When I wake up and get out of bed at 5 AM for my 6:00 shift, I’m exhausted, but I know I am going to be able to pay the rent.” Likewise, she now has more money for groceries, and for the first time in a year was able to buy a new pair of shoes and get a haircut.

McDonald is still a temporary worker, but said the she would not be scared once her hours ran out because she now can save some money. She said she felt guilty when telling her co-workers that she had gotten the raise because “they deserve it too.”

The increase is a huge step in one way—some workers will be getting higher wages—but it is also not as big a step as it could and must be. The resolution leaves out over 1,800 part-time workers—also called “seasonals” or “casual employees.”

Sarah Kowaleski, who is a part-time worker in the Parks and Recreation Department at the Multnomah Arts Center, described herself as “living in poverty.” She told the council that while she had many expectations for her job, she “did not count on having to struggle to feed myself.”

Icarus Jacoby Smith, a “casual” employee at the Mount Scott Community Center, said “Part-time seasonal workers are an integral part of the Parks Department. We are here making sure that the parks, pools, and facilities are kept safe and enjoyable year-round. I think it’s time our wages reflect a certain level of recognition for the work we do in this community.”

According to numerous people who testified, wages should not be based on number of hours worked. “Seasonals take their jobs as seriously as I do,” said Eric Dash who has been a full-time Parks and Recreation employee for 28 years. “Some have worked their jobs for decades. They are not seasonal at all. They’re vital. They work hard. They’re extremely crucial. I can’t see any reason in separating them from this $15 proposal.” Dash later stated that part-time workers not having the same wage as full-time workers was “an embarrassment to the City of Portland.”

At the hearing, 15 Now PDX, Portland Jobs with Justice, SEIU Local 49–which represents workers affected by the Fair Wage Policy–and LiUNA Local 483–which represents parks workers–showed support for the resolution, but called on Commissioners to set up a contingent workers task force to produce a concrete plan for creating more full-time jobs that could be covered under the proposed $15 minimum wage for city workers. They also urged a redefinition of “casual” to be more accurate and limited in use.

During the hearing, Commissioner Fritz introduced a number of amendments. One was to limit the increase in the Fair Wage Policy to full-time contract workers only, and another was to ensure the contingent workers task force will be finished with its work in time for the next budget cycle. She also announced plans to amend her current budget request to include a $15 minimum wage for all seasonal City maintenance workers starting in their second year of employment. 15 Now PDX, while opposing any attempt to limit the $15 minimum wage to full-time workers only, applauded Commissioner Fritz for championing this goal of expanding the minimum wage for the City’s maintenance workers.

Martin Luther King once said that budgets are moral documents. While the council may take pride in passing a wage increase for some City workers, leaving others behind effectively means they find it acceptable to leave some working people in poverty. Time and again when the issue of raising the minimum wage comes up, politicians and business leaders have a litany of excuses for why this cannot be done, inevitably pointing to a lack of money–a refrain echoed during testimony by Mayor Hales and Fritz.

Shamus Cooke said the council needs to look for creative solutions to make up the shortfall. Fritz seemed to say that this was not possible at the moment. Cooke then reminded her that Commissioner Novick had already showed how to raise more money when his office commissioned a poll that showed a majority of Portlanders believe the rich should pay more in taxes.

A few minutes later, Laurie King of Jobs with Justice noted that 55% of the general fund goes to the police, an odd circumstance in light of the flat rate for crimes such as aggravated assault, rape, and robbery. “It’s not a question of revenue,” said Jamie Partridge of 15 Now PDX. “It’s a question of priorities…you might consider cuts in the police department.”

“If the present system requires working people to live in poverty,” said Melissa Vollono of Socialist Alternative, “maybe we need a new system.” Her statement brought applause from the gallery.

Vollono may be right. For all the celebration surrounding the resolution, a 15 dollar per hour minimum wage still leaves much room for improvement even for those few who will get it. According to a 2014 report by the National Low Income Housing Coalition, a single mother earning the minimum wage in Portland would have to work 78 hours a week to afford a two bedroom apartment to adequately house her and her children. In order to afford that apartment on one 40 hour per week job, she would need to earn $17.73 an hour.

“Fifteen dollars an hour is a compromise,” said Joe Walsh in reminding the council that the minimum wage has not kept pace with inflation. “Twenty-two dollars is what is needed.”

According to one part-time worker who testified, some managers tell part-time workers to try and get in their 1,200 hours in a manner that allows them to maximize unemployment benefits in order to make ends meet for the year. For years Portlanders have raged against Wal-Mart for its anti-worker policies, some of which are designed to keep its workers from getting full-time benefits. Although Wal-Mart’s methods are more sinister—for example having employees work weekly shifts that leave them just shy of full-time status—the effect is still the same: part-time workers are forced to go on some form of welfare to make ends meet. If that is intolerable when Wal-Mart does it, it should be even more so when City of Portland’s policies create the same net result.

Along with raising the minimum wage for all working people in Portland, as well as the state, the spirit—and need–that has brought so many people into the 15 Now fold must extend to other areas. For example, rents are skyrocketing in Portland, and the City has no rent control policies. As rents rise, eventually $15 an hour will not cut it perpetuating a trend whereby lower-wage working people are forced out of the City.

At the conclusion of the hearing, Mayor Hales talked about two ideas he sees as governing Portland: localism and communitarianism, saying that as Portlanders “we believe we are responsible for the people of this place” and “we think about each other.” Considering the myriad of problems facing some people in the city—people lacking housing, people being murdered by the police, and still, despite the resolution, people working for the City but not making a living wage—it is difficult to square Hales’ sentiments with reality.

Still, there was cause for celebration after Mayor Hales brought down his gavel to end the session. “This is a huge victory for the Fight for $15 here in Portland, in the State of Oregon, and across the country,” said Norton-Kertson. “We applaud the Mayor and commissioners for pushing this through, and we call on them to continue working to ensure a $15 minimum wage for all city workers as soon as possible.”