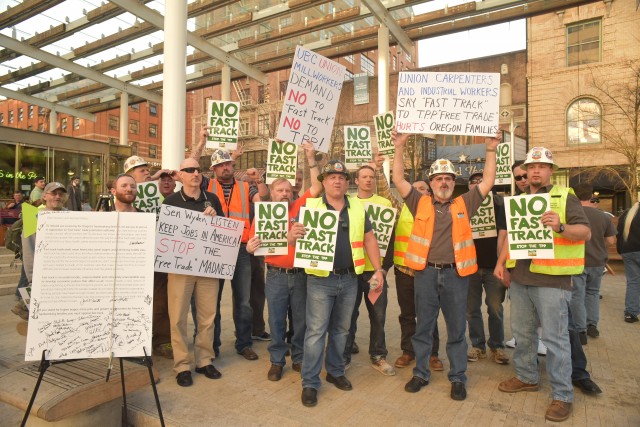 Senator Ron Wyden’s choice as to who he represents–the people of Oregon or the multinational corporations that stand to make huge profits at the expense of working people–is being pushed to a head over the Trans Pacific Partnership (TPP) . On Monday March 9 a collection of 200 labor rights and environmental activists, union members, those opposed to increased costs for pharmaceuticals, and people simply opposed to giving corporations even greater power over their government, gathered at Director Park to serve notice to Wyden that he must not support the Fast Track legislation that will all but assure the TPP’s passage.  The rally was followed by a short march.

“You all know Senator Wyden is the most important senator in the entire country when it comes to trade right now,” Elizabeth Swager of the Oregon Fair Trade Campaign told the raucous crowd. “He’s feeling a lot of pressure from the people who want to offshore our jobs, jack up our medicine costs, and undermine our environmental protections and deregulate Wall Street.”

Wyden is the ranking Democrat on the Senate Finance Committee, and his support for Fast Track is being courted heavily by Republicans, the Obama Administration, and the corporations who will gain from the TPP’s passage. That support is seen as crucial to getting other Democrats to fall in line.

But he is also feeling pressure from his real constituents, the people of Oregon. They should know best, since Oregon has lost 75,000 jobs since 1994, when the North American Free Trade Agreement (NAFTA) became law.

Fast Track is the legislation that is used to ease the passage of so-called free trade agreements (FTAs). It gives the president all negotiating power in the crafting of FTAs, even as the Constitution mandates that trade is the purview of Congress. When the resulting trade legislation is brought before Congress, there is very little time for debate, and no amendments may be added to it. The public is almost entirely squeezed out of the picture.

And with good reason. What little is known of the TPP–it is being negotiated in secret by about 600 corporate lobbyists, but because of leaked documents published by Wikileaks people have been able to catch a glimpse of what the legislation will contain–shows that the TPP is another FTA like NAFTA and the Central American Free Trade Agreement (CAFTA). It has very little to do with trade. These arrangements tear down national sovereignty, making sure that things like environmental and labor laws cannot stand in the way of corporate profits.  They protect corporations from democracy. 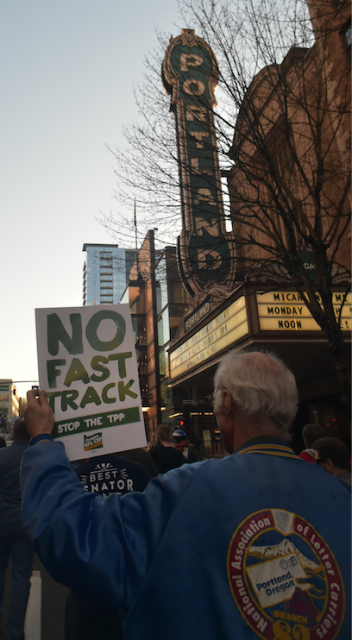 Rob Nosse, Oregon District 42 State Representative, urged people to keep on pressuring their representatives in Congress, noting that no FTA has been stopped once Fast Track has been passed. “We can’t make trade deals fair for workers when Fast Track exists,” he said.

Oregon AFL-CIO President Tom Chamberlain told the crowd, “We got NAFTA, we got CAFTA, and the way I see it, workers got the shafta,” adding that when FTA supporters talk about job growth, they not only neglect the far greater number of jobs lost, but also ignore the kind of jobs that return. Public Citizen’s Lori Wallach has calculated that NAFTA has cost the US one million jobs, and has resulted in decreased wages and benefits along with an increase in inequality. Wallach’s calculation of 1 million jobs lost due to NAFTA is a net calculation–the difference between jobs lost and jobs gained. Chamberlain noted that the jobs that do come back are “non-union lower wage jobs with no benefits.”

Chamberlain has consistently expressed opposition to FTA’s, but he also has been an avid supporter of Wyden–so much so that many activists call him Wyden’s pitbull. The rally was hosted by the Oregon AFL-CIO, and Chamberlain’s presence at the rally may mark a turning point. Certainly the union’s Facebook event page pulls no punches in stating  “Oregon can’t afford another free trade deal like NAFTA, and we have a chance to put pressure on Senator Ron Wyden and members of Congress to stand with Oregon’s workers and say NO to Fast Track and NO to the Trans Pacific Partnership.”

Ostensibly Wyden’s problem with the TPP has been the lack of transparency during negotiations, but NAFTA was wide open for the public to see and its bad effects are clear. The TPP, composed of the US and 11 other nations of the Pacific Rim that produce over 40% of the world’s gross domestic product, would dwarf NAFTA. Worse, the TPP is a docking agreement–meaning that it remains open for other countries to join.

What no doubt does bother Wyden is the growing solidarity among people opposed to FTAs. His January Town Hall event at Portland Community College’s Southeast Campus was disrupted and eventually taken over by activists from the Black Lives Matter Portland and Don’t Shoot PDX movements, who turned the usual dog and pony show into a substantive discussion of the issues that mattered to people in attendance.

Then, on February 18, at a rally that went to both Representative Earl Blumenauer’s and Wyden’s Lloyd District offices, Adrienne Cabouet of Black Lives Matter Portland addressed the crowd, reminding them that economic and race issues are deeply enmeshed, and that economic pitfalls such as those resulting from FTAs affect people and communities of color even more than they do white people and their communities. Cabouet called for solidarity that recognized the harsher economic realities faced by people of color due to “decades of institutional racism ingrained into every segment of our state and government.” Those words were well-received.

This most recent rally urging Wyden to cast his vote for Oregonians saw Ramon Ramirez of Pineros y Campesinos Unidos del Noroeste (PCUN), the Oregon farmworkers’ union and largest Latino organization in the state, noting the need to oppose Fast Track and stand up for working people everywhere. “Fast Track is another word for exploiting workers here and in other countries,” he said. “It is nothing but another disguise to exploit workers…to squeeze more profit out of working people.” 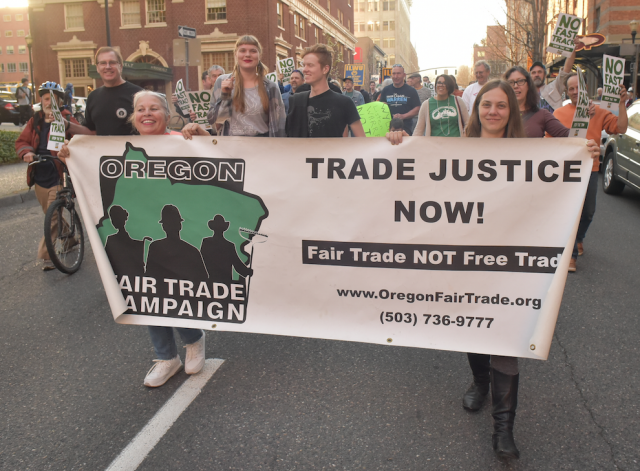 Ramirez also told the crowd about the direct link between NAFTA and the rise of people without documentation migrating to the US. Those people did not happily leave their homes. NAFTA resulted in the Mexican market being flooded with cheap US agricultural produce against which Mexican farmers could not compete. These farmers then left their land, moving either to the cities where they created a glut of labor that reduced wages or to the US where they could send back money to their families and help them survive, and perhaps be reunited with them. “We don’t need Fast Track,” Ramirez said. “We need jobs. We don’t need Fast Track. We need immigration reform. We don’t need Fast Track. We need better wages.”

This is a winnable fight. As Swager reminded the crowd, in January 2014, Senators Orrin Hatch (now chair of the Senate Finance Committee) and Max Baucus, and Representative Dave Camp introduced Fast Track legislation. It failed, and all of Oregon’s federal delegation opposed it. That included Wyden who felt too much pressure from Oregonians who banded together in opposition to Fast Track. He had little choice but to oppose the measure, despite pressure also coming from the corporations that fill his campaign coffers.  In other words, Oregonians’ solidarity and the strength that comes from it made Wyden fearful that if he voted for Fast Track, it would be used against him by voters in his next election.

That possibility is now rearing its head for Wyden.  A recent poll conducted by Public Policy Polling on behalf of Democracy for America showed that half of all Oregon voters would be less likely to vote for Wyden in his re-election campaign next year if he votes for Fast Track and the TPP.

In January 2014, Oregonians showed Senator Wyden who he represents. They can show him again. Otherwise, they may well show him the door.

Want to get involved? Call Senator Wyden at (503) 326-7525 and tell him you want him to oppose Fast Track and the Trans Pacific Partnership.

Follow up your phone call with an email to Senator Wyden by going to: http://org.salsalabs.com/o/1034/p/dia/action3/common/public/?action_KEY=17225