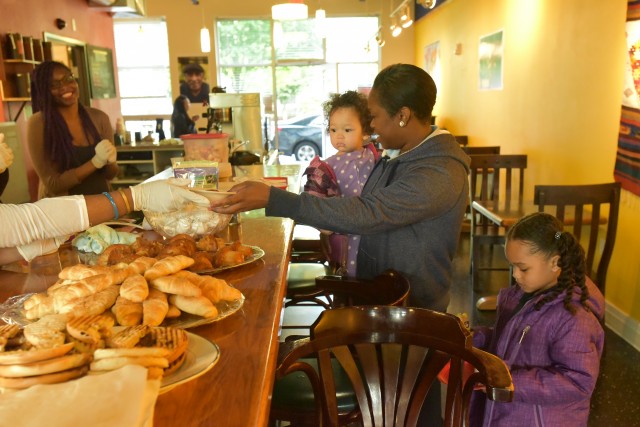 Of all things that bring people together, food is among the most potent. Beyond it being necessary for survival, eating can be pleasurable. When done as a community, those pleasures expand and further buttress the values that support that community. Sharing, caring, and understanding—just to name a few—are fostered. Conversations develop between people who may have never done more than given each other a perfunctory nod. Parents talk about their children. Their children talk with each other about games and toys. Friendships and plans are made. In a society where the ruling class preaches the myth of the rugged individual and relies on it to support consumerism over citizenship, sitting down for a meal with a stranger can be a revolutionary act.

On April 27 the Oregon chapter of the All-African People’s Revolutionary Party (A-APRP) started a free breakfast and education program at Columbia International Cup in New Columbia. Modeled on the Black Panther Party’s free breakfast program, the A-APRP hopes to serve up a healthy alternative to both the Portland Public School’s (PPS) breakfast program and its curriculum, which teaches very little about African people and their cultures. And just like the Black Panther Party’s program, it is open to all children.

Jabbari, a 6th grader at George Middle School who enjoys playing basketball, says he eats breakfast at school “unless it’s really nasty.” That breakfast is usually a Powerup–a sausage and bread breakfast sandwich–that is neither the most balanced meal, nor the ideal for fueling a child’s mind for learning.

Nevaeh, who is in the first grade at Rosa Parks Elementary, and who enjoys playing games on an iPad, gets a school breakfast that her mother describes as largely composed of sugar. “Banana bread is about the healthiest thing she gets at school breakfast. They give them these nasty pre-cooked breaded cinnamon sticks. I feel like it’s more sugar. They give them those artificial juices. They have those maple bread things that are already sweetened. They give a waffle, saturated with syrup. There’s no nutrition.”

On the bar at Columbia International Cup lies an alternative. A-APRP volunteers serve up a spread of oatmeal, raisins, fresh fruit, hard boiled eggs, crescent rolls, whole grain muffins, and bagels. The food is donated by groups such as Vegans of Color, the Alberta Street Co-op , and Food Not Bombs, as well as other community members. It is what students should be eating for breakfast: food that the body burns slowly and steadily, and thus not creating the energy spikes caused by sucrose and fats.

Not only is breakfast served, but so is education. For now, that teaching centers on the personal. Marquise, who attends Pioneer School and next year will be a freshman at Jefferson High School wants to be a football player. Ahjamu Umi, a member of the A-APRP who once upon a time played linebacker for Sacramento State, tells Marqise the importance of having a backup plan, and that even if he makes the NFL, he will need to know how to read a contract.

Soon enough, the education that comes with breakfast will expand.  Although the education component of the program will point toward the liberation of Black people from white supremacy, it is part of a wider liberation movement for all people.

Ebony Oldham of the A-APRP says many high school students of African descent tell her they do not learn their history. “You’d be surprised how many people don’t know where we came from. Folks aren’t teaching our history. We can teach our youth what they are not being taught.”

While eating his breakfast, 9 year old Habakkuk listens attentively as his mother tells him about the necessity of the education component of the program. She tells him that there are other ways of looking at culture and history than what he will get in school. The PPS curriculum, she says, is made to keep white domination in place.

It is difficult to escape that reality. After all, the history taught in most schools is largely the history of white people with an emphasis on a classless society. Black people are mentioned in the context of slavery and the Civil Rights Movement, and individually Martin Luther King is the predominant name. Throw in Harriet Tubman, and depending upon how up to date the textbook, President Obama, and you pretty well have scope of African peoples’ presence in US history.  It is a soft-pedal form of white supremacy and is a part of what helps perpetuate a culture in which one Black person is killed every 28 hours by police or vigilantes.

In the 4 days it has been available—the program is run on Mondays and Fridays—17 children have come out to eat. The A-APRP has already registered 30 children, and its members plan on knocking on more doors, inviting more families to get involved. “We are telling people that we have to take responsibility for our youth’s development—intellectually, spiritually, and ideologically,” says Umi. 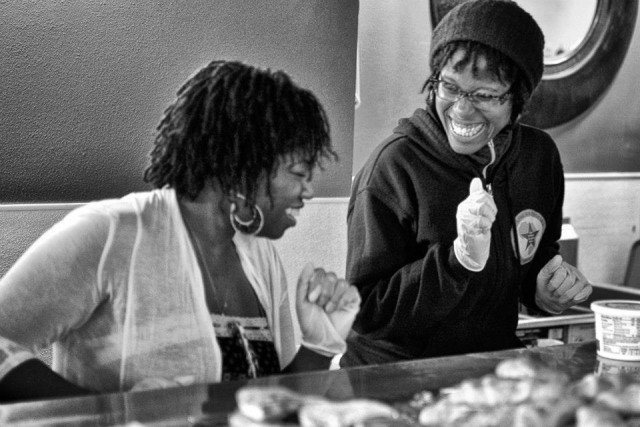 Adrienne Cabouet, also of the A-APRP, added, “We let parents know that we’ll not only be providing nourishing food for their children, but we’re also looking to educate them and provide positive and empowered African role models of the kind they probably aren’t exposed to in school.  Conscious raising is an essential part of building a sustainable movement.  We believe the path to the liberation of our people lies in building empowered, self-sufficient communities, and nourishing our children with good food for the stomach and knowledge for the brain.”

Former FBI Director J. Edgar Hoover once declared the Black Panther Party “the greatest threat to internal security in America” largely because their programs, such as the free breakfast, showed that there were alternatives to capitalism–those empowered, self-sufficient communities that Cabouet mentioned. The threat was so great that the US government, as educator and activist Walidah Imarisha has said, “used every illegal tactic possible to attack the Black Panther Party and destroy them.”

But those other possibilities are always fermenting. Whether it is the uprising in Baltimore against the police who brutally try to tamp down any group that may seek to overthrow the system or people growing their own fruits and vegetables, or any of the many other groups providing a choice that favors community over greed and violence, those alternatives exist, waiting for more people to join in their expansion.

“This program,” Oldham says, “shows how Black people can come together and pool resources. We are modeling what Black led leadership looks like. We are showing that you don’t have to depend on systems. We’re showing tangible examples of how to organize and meet the needs of our community.”

The free breakfast program is held on Monday and Friday from 7AM to 8 AM at Columbia International Cup coffee house, located at 9022 North Newman Avenue.

For more information on how to register for the program and how to donate to it, go to: http://www.aaprporegon.org/store/c1/Featured_Products.html