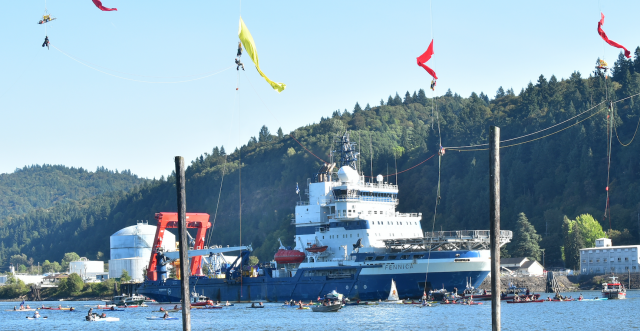 The Fennica has left Portland despite the noble and courageous efforts of the kayaktivists and Greenpeace climbers whose blockade cost Shell Oil two days of profits. But while ultimately failing to keep the boat moored in Portland, they showed people that they can stand up to the large energy corporations that have fouled the environment and climate while also showing how much more people must get involved.

There are some other very important points to take from the past two days that people should consider as they move forward. President Obama–a Democrat–approved Shell drilling in the Arctic and clearly stands behind further oil extraction, refining, and burning despite all the science and studies that show this is madness.

Portland Mayor Charlie Hales–mayor of a city that leans heavily toward Democrats, and who identifies as a Democrat–clearly stands behind Shell drilling in the Arctic and clearly stands behind further oil extraction, refining, and burning despite all the science and studies that show this is madness.

Brown and Hales talked about the blockade as if it was a free speech issue.  That certainly had some truth to it.  But the far larger issue was preventing further climate chaos caused by burning fossil fuels.  And about that, they, along with President Obama, do not care. 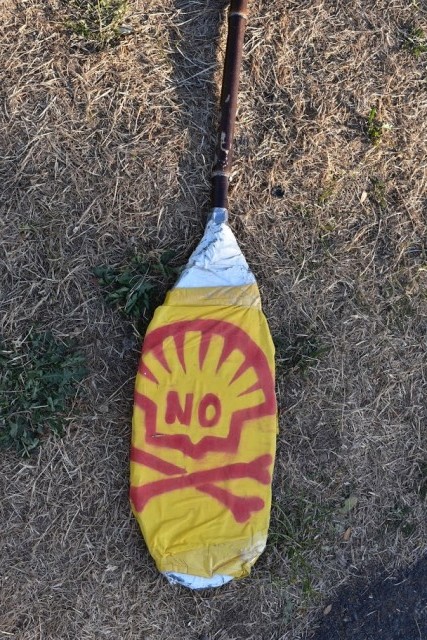 It seems we are already knee-deep in the 2016 elections, and once again the predictable cry that this election is the most important election since the Big Bang is being thrown around. At least on the Democratic side of things, it is being used in relation to Vermont Senator Bernie Sanders’ upstart campaign that stands a chance, however minimal, to upset Hillary Clinton’s bid for the nomination. But whoever wins, we are told, Democrats must unite behind her or him. And when those on whatever is called the left say that both parties are awful with little difference between them, they are told that compared with the Republicans, the Democrats are the only game in town.

What went down the past couple of days on the Willamette River by Cathedral Park and the St. Johns Bridge shows very clearly, however, that when it comes to issues of business, there in fact is very little difference between Democrats and Republicans. They are joined at the hip. Nearly all boats on the river–belonging to the Portland Fire & Rescue, Multnomah County Sheriff, Oregon State Police, and the Coast Guard–as well as the Portland police on the St. Johns Bridge, including those in riot gear, were under the control of Democrats (Multnomah County Sheriff Dan Staton is non-partisan).

These were not Democrats or Republicans who bravely took kayaks on the river, risking their lives to keep the Fennica from helping Shell drill for oil in the Chukchi Sea.

These were not Democrats or Republicans hanging from the St. Johns Bridge, also risking their lives, in an effort to stop oil drilling that better assures catastrophic consequences of climate change.

And these were not Democrats or Republicans standing on the shoreline of Cathedral Park, providing what measure of support they could for kayakers and climbers.

They see an uninviting future.

President Obama can still stop this. It’s that simple. He can rescind the lease giving drilling rights in the region to Shell and other oil companies. With a 75% chance of an oil spill within the next 77 years, and little to no way to clean up a blowout, one might think it would be obvious not to drill there.

With scientists saying that fossil fuel use must be curbed immediately, one might think it would be obvious not to drill anywhere. 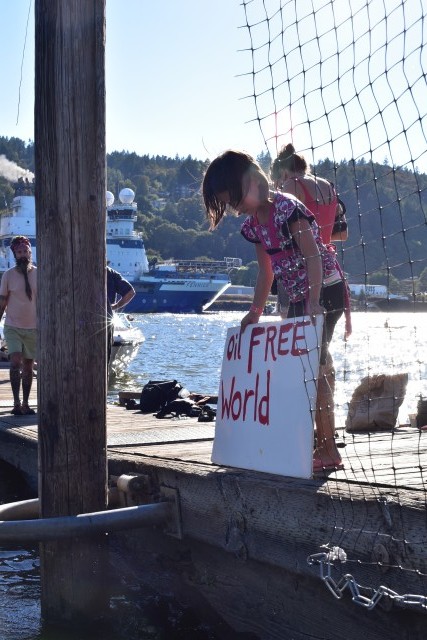 Sanders has come out in support of canceling the lease, and good for him. Oregon’s own Jeff Merkley has crafted a bill that would outlaw Arctic drilling.  But Sanders and Merkley are at best outliers in a business party composed of Democrats and Republicans. Sanders has said that if Clinton wins the nomination, he will loyally back her.  The same Hillary Clinton who has refused to take a stand on the Keystone XL pipeline.  The same Hillary Clinton who is raising much money for her campaign from the fossil fuel industry.

Shell took to the courts in its fight against the Cathedral Park Blockade. Judge Sharon L. Gleason declared that Greenpeace would be fined for as long as its members were dangling from the bridge and preventing Shell from drilling and thus augmenting climate change. According to Dirk Vanderhart and Shelby King over at the Portland Mercury, both Oregon governor Kate Brown and Portland Mayor Charlie Hales had been uttering the predictable pabulum about safety and rights, but ultimately they kowtowed to what many of the folks gathering in Cathedral Park referred to as Shell’s right to destroy the planet.

Vanderhart and King reported Hales’ spokesperson Dana Haynes in regard to Gleason’s decision as saying, “If you break the law, you break the law. You can’t not enforce that law. How every one of us feels about the end of stopping Arctic drilling, that’s not the issue that faces Portland today.”

Haynes made no mention about who writes the laws.  He also left out many other points, such as the impact fossil fuel extraction has had on various indigenous communities.

However, Haynes was correct when he said the issue is not how we feel about stopping Arctic drilling. The issue is what people are willing to do to stop Arctic drilling, to stop the use of fossil fuels, and to give future humans a fighting chance at surviving the unpredictable and violent world of weather and accompanying violent politics we will pass on to them.

That is why so many of people blockading the Fennica expressed complete disdain for the political system whose response is designedly too tepid and too slow. Just as how Portland tries to deal with houselessness, on a national level the Democrats have tried to deal with climate change: by finding a business solution that logically must ignore the problem of a capitalist economic system that values profits over people. It is cynical politics, but an entirely predictable consequence of a political system almost entirely controlled by powerful corporate interests.

That Democrats may be better than Republicans is not the issue.  It was not Democrat or Republican politicians who stopped Shell Oil–that is, cut significantly into Shell Oil’s profits–for two days.  People working in solidarity with each other, armed only with ropes and kayaks, did that.

The problem is the capitalist system, supported and ruthlessly protected by both the Democratic and Republican parties, that has put much life on earth in a stranglehold. As a sign down at Cathedral Park had it, “System change, not climate change.”

That need for systemic change is why over 500 people gathered in support of the kayaktivists and climbers on Thursday afternoon. It is why so many people took to the river and the air between it and the deck of the St. Johns Bridge.

It’s the only game in town.

2 comments for “The System Fiddles While We Burn”