That cry came from one of the 75 kayakers Wednesday evening on the Willamette River, off the shore of Cathedral Park. Over 350 people had gathered in the park in support of those kayakers and the 13 Greenpeace climbers suspended from the St. Johns Bridge. All are working to keep the Shell Oil icebreaking boat Fennica from leaving a dry dock in Portland and heading to the Chukchi Sea in the Arctic to explore and drill for oil.

The Fennica is carrying caps required for capping oil wells in case of a blowout. Without those caps, Shell cannot drill, and with winter closing in at the Arctic, time is of the essence.

While the cause is urgent–the science is clear that the Earth is approaching a tipping point where the survival of humans, as well as other species, will be in doubt–there was undoubtedly a festive attitude in Cathedral Park. People on land cheered those on the water and in the air, and at the launch on the north side of the bridge, they waited in line for their chance to grab a kayak and paddle on the river.

It was perhaps the happiest blockade in history. And it was also deadly serious. Most of the crowd clearly understood what was at stake, recognizing that what was going on was far beyond a statement. This was militant direct action aimed at better assuring a livable planet for people, as well as preventing further damage to people and cultures that have already suffered greatly due to the effects of climate change.

“I am here,” said Hyung Kyu Nam, “because it’s up to every one of us to shut down the system that not only harms the climate and the earth, but makes the most oppressed suffer the most from the damage. The profiteers of this system are too entrenched and politicians too beholden to those interests. Climate change means not only the destruction of Earth as we know it, but also social and political conflicts from rising food prices, conflict, and military repression. This is a critical time to give a final kick to these companies while they’ve been losing money from low oil prices.”

The Greenpeace portion of the blockade has been particularly impressive. The 13 members rappelled from the bridge in the early morning hours on Wednesday, positioning themselves so that if the Fennica tried to pass through, it would catch on a hookline attached to a climber, putting the climber’s life at risk.

The climbers first went over the pedestrian rail, and then attached another cable to the lowest portion of the bridge, at least six feet below the sidewalk. That alone will make extracting them difficult and dangerous. Beyond that, the climbers are each linked together by very loose lengths of cable. If they are to be extracted, it will be no easy task.

The Portland Police clearly felt they had solved at least one problem. A Greenpeace blog post noted that the climbers had “enough supplies to last several days.” The police closed off the sidewalks of the bridge to pedestrians and cyclists, presumably to keep people from providing food, water, and other provisions.

But in the late afternoon, the climbers began sending down to kayakers bags that reportedly contained soiled diapers and food wrappers. As well, it was stated that those kayakers who retrieved the bags then attached sacks of supplies that the climbers then hoisted up. Not long after these exchanges, cyclists and pedestrians could be seen crossing the bridge.

The blockade has exploded on to national and international news. It has been about as perfect a media event as one could want. With cloudless blue skies and the gorgeous St. Johns Bridge as a backdrop–absolutely resplendent in the early morning sunlight–it was a dream for photographers. And later, as the sun descended, a nearly full moon rose from the south. In the darkness, climbers suspended lanterns from the cables connecting them with each other, while kayaktivists sculled with lamplights for guidance and safety. On the shore, it appeared as if a swarm of fireflies had gathered.

The activists in the water, and particularly those in the air, are taking a great risk. But the risk of inaction is far greater. Quite a few people on the ground stated the blockade had given them hope when they had assumed that there was nothing that could be done, both in terms of keeping the Fennica from reaching the Arctic and fighting the fossil fuel industry that has caused the climate crisis. While there are clearly numerous groups working to limit and eventually reverse the both already occurring and predicted devastating impacts of climate change, for some people those groups have remained hidden. Regardless of that, people were clearly invigorated Wednesday night, many inquiring what they could do to take part. 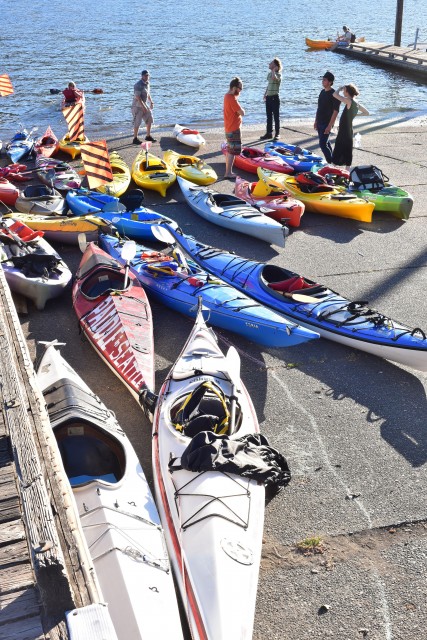 It remains to be seen how Mayor Charlie Hales will respond. Business friendly as he is, Hales likely wants to see the Fennica get on its way. But he is the mayor of what is putatively the “greenest” city in the country. And even though that title has been suspect at least since the Pembina petroleum export terminal controversy, Hales does not want to enter his reelection bid known as the man who went to the mat for Shell so it could drill for oil in the Arctic. Photos of starving polar bears and oil saturated penguins captioned with, “Thank you, Charlie Hales” are likely not going to be well received in the mayor’s campaign office.

Nick Caleb, a community activist who ran for City Council last year, said, “Members of the environmental community have been waiting to see if the mayor’s recent rhetoric around the importance of getting serious on climate were the result of a moral awakening or simply political expediency. One way to show his commitment would be to join the blockade against Shell.”

Caleb noted that in Seattle, the mayor and several city commissioners joined kayakers on the water or worked behind the scenes to make the arctic drilling rig’s stay there as long as possible. “We want the same commitment in Portland,” he said. “If you talk a big game on climate, you’d better come through. The world’s eyes are on Portland right now, and our local officials are wasting an opportunity to act.”

Update: About 7:30 this morning the Fennica made its way toward the St. Johns bridge, coming within about 500 yards of the Greenpeace climbers.  Onlookers said the boat had a cherry picker on it to remove the climbers or in some way pass through without harming the climbers.  The climbers are apparently rigged in a way such that if one is extracted, another can slide over to her position while keeping “the wall” intact.

The Fennica was turned away, a clear victory for the blockade.

A sizable crowd has already gathered at Cathedral Park, with many kayaks already in the water.  Police are trying to divert people from the park, but people are clearly getting around them.  Come out and provide support, by land or by water.