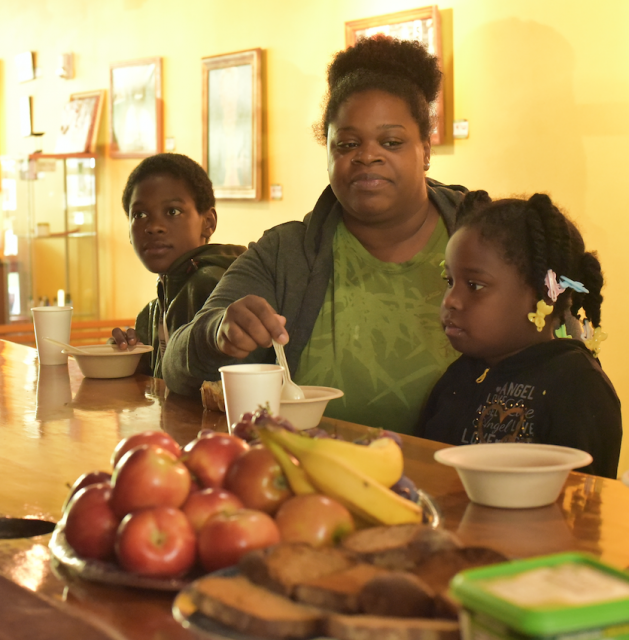 Charles is transcending, and he is taking the crowd of children and adults in Columbia International Cup in New Columbia with him. I’ve seen him in Brian’s coffee shop here on North Newman Avenue, but I’ve never seen him sit down at the piano. Then again, the piano is new to the place, acquired only a few weeks ago.

Here, on this first day of the All-African People’s Revolutionary Party (A-APRP) free breakfast program of the 2015-2016 school year, it seems right to put some weird timing in your step. School started the day before, August 27, and while a rock standard 4/4 can get you going–with the right backbeat–nobody can cut a straight walk when faced with 9/4.

Xavier and Emmanuelle have gathered by the bookshelf not far from the piano. They are mesmerized by the sounds coming out of Charles via the keys. And why not? He sounds fantastic. A few of the songs I know by name, such as The Beatles’ “Lady Madonna,” although I am sure Paul McCartney never heard it like this. Charles is further swinging it, switching between rag and blues, changing pace and style. He soon segues into “Eleanor Rigby.”  As with some other songs whose titles I do not know, the melody is clear, and all that surrounds it is different.

Charles takes a short break, turning to me, Xavier, and Emmanuelle. “I haven’t played in awhile,” he says and then gestures toward the piano. “When this is tuned, it’ll be good.”

The breakfast and education program is already undergoing a fine tune. It began in late April, serving healthy food to students–sometimes over 30 of them–from 7 to 8 AM. Fruit, oatmeal, eggs, juice, and other wholesome foods offer an alternative to the fat- and sugar-laden items that often land on the trays of students who get breakfast at school. The difference would be important for anyone, but is critical for students readying to concentrate for six hours at school.

Over the summer, when the program ran from 8 to 10 AM, Brian would occasionally break out the beignets. With little studying to be done, a couple of donuts are okay. To judge by the smiles on the kids’ faces, they are significantly better than okay.

During the last few days before kids headed back to school, the A-APRP offered free school supplies. Backpacks, notebooks, pens, pencils, glue, and crayons were just some of the items people had donated–items eagerly accepted by the 20 or so young folks who came to the Columbia International Cup to receive them.. 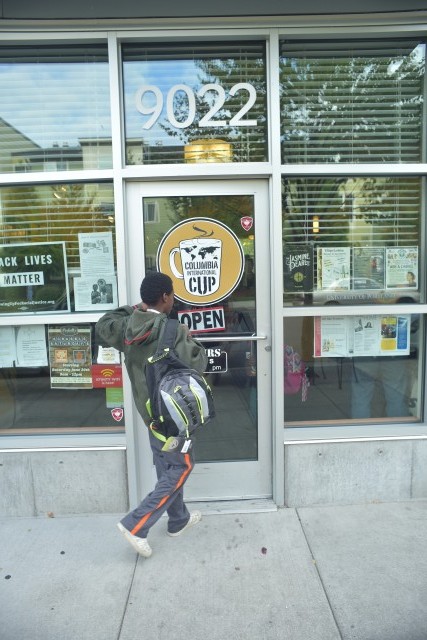 The food portion of the breakfast program–while desirable and necessary–is part of something bigger. One eats food for physical necessity, to give the body what is necessary for creating the energy that sustains life. A meal involves that food, but it also involves rituals that can take many different forms. In the case of the A-APRP breakfast program, that ritual involves a community gathering.

The kids come in, some with their parents or guardians, and talk with each other. Those parents and guardians interact with the children as well as with each other. Some have gardens and discuss what they are growing and how they can grow them better. Others discuss school issues. The talk is hardly perfunctory. It is the talk of community, not passersby. You feel welcome. The food is also communal in nature. Much of it is donated by Vegans of Color, the Alberta Street Coop, and Food Not Bombs. As well there are many out of pocket donations.

Columbia International Cup was chosen for the program because New Columbia has the highest concentration of Black–or as the A-APRP says, African–people in Oregon. If you stand out on the street for any length of time, you will notice a highly concentrated police presence. In a country where police and vigilantes kill an African person every 28 hours, and in a city whose leaders refuse to take meaningful steps to address the problem of a police force that is racist at its core, that police presence sends a specific message that is rarely heard outside of communities of color.

“This community has a disproportionate amount of Africans and police,” says jamallah bourdon of the A-APRP. “We came in and saw the community had a need. We want to instill pride and collectively care–make sure kids feel wanted.”

At the counter where members of the A-APRP serve the food, Ahjamu Umi is teaching five kids some phrases in Akan, a language known by the 9 million Ashanti people–mostly in Ghana–who speak it as Twi. They learn “good morning,” (Maakyre) “how are you,” (Wo ho ti sen) and “I’m doing fine.” (Me ho ye). Very good phrases to know when settling down with friends, family, and community.

Portland’s schools, like most schools throughout the country, teach a curriculum–particularly in social studies–that promotes a white point of view, and one that is highly sanitized. The A-APRP’s breakfast and education offers an alternative, encouraging people to also view the world through African eyes and values.

Umi stresses that the goal of the program is to “build relationships with children and adults in the community and strengthen those relationships so that continued revolutionary work can go on in the neighborhood with growing support. Our objective isn’t just to have a breakfast program, but to build a community liberated zone in the vision of Kwame Nkrumah. We are merely at the beginning stages of doing this right now.”

“Twi is important because we are African people,” says Umi. “We were Africans when we first arrived here 500 years ago, and we are still Africans today. The capitalist system works hard to disconnect us from Africa because a conscious African people–conscious to their connection to Africa–is a great threat to the continued exploitation of Africa, which is fundamental to maintenance of the capitalist system. Languages like Twi, Yoruba, Fulani, and Wolof were beaten out of us. So teaching Twi is a way of reinforcing that we are not Americans. We are Africans, and by reclaiming these languages in the context of revolutionary self-sufficiency–such as the free breakfast program–we teach independent thinking, which is a must for any people to be free.”

This does not mean the program is only open to African students. Like the Black Panther Party’s breakfast program, it is open to all people, and all people are encouraged to attend. Just as it should be intuitive that students should go to school with healthy food in their stomachs, it should also be intuitive that in a society with democratic institutions that students should learn to see the world around them from multiple points of view so they can challenge injustice and create and erect palliatives.

“African culture,” says Umi, “is humanistic, which means we accept everyone. But since we see America as being built and maintained on African exploitation, we believe it important that people understand our existence, struggle, and mechanisms to be free.”

“Students go to these institutions where people who are being paid to teach don’t look like you and are teaching white experiences,” bourdon says. “Our purpose here is to engage these students in a perspective that is African centered. That doesn’t mean it is limited to Africans. But we do have an awareness that these schools are not set up to encourage kids to study African values and that they teach kids to devalue African lives.” 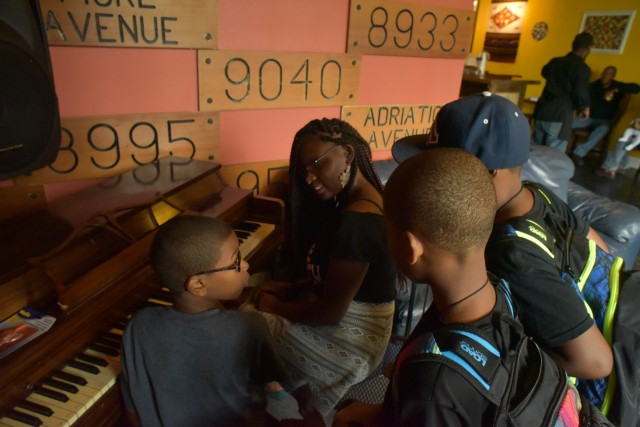 On August 28th two white girls come to breakfast. Both have been there before, as have the adults who have come with them. Umi welcomes them, saying to the children, “So glad to see you again. You take whatever seat you want.” Comfortably, they do. They clearly feel a part of this community. Xavier later asks one of them, Erin, if she is ready for school. He offers to show her the free supplies.

Earlier in the week Habakkuk, Emmanuelle’s brother, was playing the piano. He already runs his fingers across the keyboard faster than I ever will. He is methodical in his playing, expecting perfection, but not riding himself too hard. Adrienne Cabouet, also with the A-APRP, listens, and soon Habakkuk invites her to play along. He teaches her what to play, and her engaging smile and joyous laughter prove how much benefit can be derived from approaching things with a light touch.

Later I hear Umi talking to a parent, saying he wants to pass on to these young people “the confidence that we have all we need” to change things. A week earlier, after the first of the school supplies had been handed out, I was talking with Umi on the sidewalk and he told me that these very small acts and events are what making change is all about.

He is right, of course. The stuff we read in textbooks is usually composed of big names and events. The American Revolution is four or five men and a few battles. The Civil War is Abraham Lincoln and Ulysses S. Grant. The Civil Rights Movement is Martin Luther King, Jr. and the March on Washington. Left out are numerous events and people who made all of it possible.

As conservative and byzantine as the governing institutions of this country are, change does occur. Not because of those institutions, but because of the relatively unknown people working together in spite of those institutions, forcing those with power to bend to their will. In the big scheme, these small acts–these alternatives to the status quo–may seem insignificant. But through small, willful acts of sharing and community such as the A-APRP’s breakfast and education program, an alternative way of living can ultimately coalesce.

The All-African People’s Revolutionary Party’s breakfast and education program is held from 7-8 AM on Monday and Friday at Columbia International Cup, located at 9022 North Newman Avenue.

Want to get involved? Find more information on how you can support the program at: http://www.aaprporegon.org/store/c1/Featured_Products.html