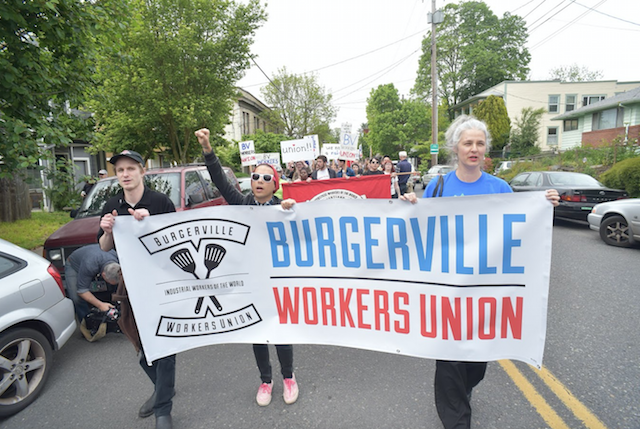 Over 120 people gathered at the Clinton Street Theater in SE Portland on Wednesday April 25 to mark the launch of of the Burgerville Workers Union. The workers have organized themselves with the support of the Industrial Workers of the World at multiple stores in Portland and Vancouver, Washington and are demanding a $5 an hour raise for all hourly employees, healthier working conditions, more flexible scheduling, and greater respect from management.

The Burgerville Workers Union officially unveiled itself with a short film shown at the theater. Running at a little more than 5 minutes, it was a well-crafted film that featured some Burgerville employees who talked about how their wages were barely subsistence and their hopes that having a union will change their fortunes.

Burgerville currently has over 40 locations in Oregon and Washington, and in 2010 it took in approximately $75 million dollars in revenue. It has established a niche in the fast food world by portraying itself as a responsible and progressive business by adopting practices such as using locally grown food, powering its stores with wind energy, and composting food waste.

However, when it comes to how it treats its workers, Burgerville seems little different than McDonald’s, Burger King, or Wendy’s. According to the union, a typical Burgerville crew member makes $9.60 an hour and works 26 hours per week. That comes out to about $990 per month before taxes.

“I’m poor because they’re rich, and they’re rich because I’m poor,” said Burgerville employee Ellie during the film, “and I don’t think it should be that way.”

Much of the film centered on the difficulty of being able to afford housing in Portland while making a Burgerville wage. Greg noted, “Most people can’t even afford to have an apartment and everyone knows that the cost of living in Portland has gone insane. Basically it took me a second job to have a place of my own. I couldn’t afford it definitely with what Burgerville pays me.”

According to a 2014 report by the National Low Income Housing Coalition, a single mother earning the minimum wage in Portland would have had to have worked 78 hours a week to afford a two bedroom apartment to adequately house her and her children. In order to afford that apartment on one 40 hour per week job, she would have needed to earn $17.73 an hour.

Luis Brennan, who works at the Portland airport Burgerville, described himself as “the heart of Burgerville” when speaking from the theater stage about how difficult it is for him to stretch his wages over a month. After paying all his bills which include rent he shares with his partner, a student loan, and automobile related costs, Brennan is left with $27. “Oh joy,” he sardonically told the crowd, “I could eat at Burgerville three times.”

Compared with Jake, who appeared in the film, Brennan sounded like he was living high on the hog. Robert stated he relied on Burgerville for food, saying, “I’m not in a position to go out and eat or go buy groceries. If I’m not working there, I just don’t eat.”

The Burgerville workers’ announcement came as a flurry of states have recently passed legislation raising their minimum wages. The recent pressure to raise the wage floor began when fast food workers in New York went on strike on November 29, 2012 demanding higher wages, better working conditions, and the right to form a union without retaliation from their managers, and has been pushed by grassroots movements such as 15 Now. While the gains made have been substantial, they have clearly been made to favor business interests over workers. For example, in March, Governor Kate Brown signed into law a new minimum wage that will reach $14.75 an hour in Portland in six years. If the minimum wage established in 1968 had kept pace with inflation, it would now be about $22.50 an hour, and it is difficult to see how workers will be any better off at that wage in 2022 than they are today–especially if rents keep skyrocketing.

“I’m part of the union because I’m tired of being treated as though I’m disposable,” said Brennan.  “I want to be valued and to be able make ends meet. Portland is my home and at these wages, I’m going to be pushed out of my home. The new minimum wage increase is great, but it’s not enough. We don’t need a raise in 6 years. We need a raise now.”

A wide swathe of groups have come out in support of the Burgerville Workers Union, including Portland Jobs with Justice, the All-African People’s Revolutionary Party, the Portland Central America Solidarity Committee, the Portland Association of Teachers, ILWU Local 5, the Alberta Street Cooperative Grocery, and People’s Food Co-op. Suzanne Cohen, the incoming president of the Portland Association of Teachers told the boisterous crowd inside the Clinton Street Theater, “I’m here representing 4,000 educators to say we’ve got your back. We enthusiastically support you because when you better your working conditions you better all of our living conditions…We will stand with you every step of the way.”

Soon after the film, the crowd exited the theater and marched up SE 26th Avenue to the Burgerville that sits on its intersection with Powell. There, some members of the union delivered a letter to the store’s manager, outlining the workers’ demands. As well, groups of supporters went into the store, bought food, and told the manager that they were pleased that the workers had unionized. They also left tips that amounted to $23 for each worker.

One key to victory will surely be breaking down Burgerville’s progressive facade for its customers to see. “Their posters (inside the stores) are always like ‘we care about the community’ and ‘you know this local farmer–we support him by buying potatoes from him,’” said Greg during the film. “But you could take care of this local community of workers. We’re the local community.”

Ultimately, it is the workers’ resolve and unity that will be needed to win their demands. The Burgerville Workers Union and the alliances it has fostered with numerous community groups should go a long way toward achieving them. As Brennan told the crowd in the Clinton Street Theater, “When workers stand together in solidarity, we are stronger than the boss.”

To find out how you can support the Burgerville Workers Union, check out their Facebook page at: https://www.facebook.com/burgervilleworkersunion/?fref=ts