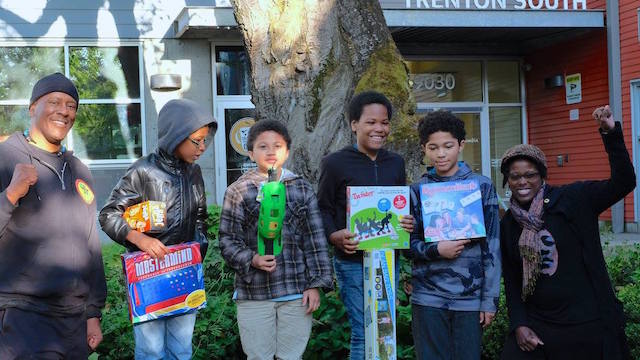 “What have you learned here in the last year?”

Ahjamu Umi poses that question to the four young people–Emmanuelle, Habakkuk, Jaiden, and Ja’waun–who have gathered around a table of food and packages just outside of Columbia International Cup coffeehouse in New Columbia. Last April, the All-African People’s Revolutionary Party (A-APRP), with the support of numerous community members and groups, established a free breakfast program at the coffee shop. The intention was to provide students with healthy meals prior to attending school as well as to educate them in African culture and history, neither of which are found in abundance in the Portland Public School system (or most schools in the US). One year later, the program has clearly been a success.

A large crowd gathered for that first meal at Columbia International Cup in April, 2015, and in many ways the adults seemed more excited than the children. Students were being offered a healthy alternative to the food offered in Portland’s schools, which according to the children’s guardians is largely processed sugar, salt, and fat. The A-APRP offers fruit instead of pre-cooked cinnamon sticks; whole grain muffins and hard boiled eggs rather than a frozen waffle saturated with syrup.

The program, to borrow a phrase Umi often uses, stands on the shoulders of its ancestors. It revitalizes the Black Panther Party’s free breakfast program that helped make it “the greatest threat to internal security in America,” according to FBI Director J. Edgar Hoover. The proclaimed peril did not lie with the greatly exaggerated violence with which an intense propaganda campaign tagged the Black Panthers.  Rather, the real risk posed by the Black Panthers was in their demonstrating that it was possible to create a society not beholden to capitalism. It is that spirit of constructing an alternative that helped lead to the A-APRP bringing the program to New Columbia which neatly fits into a larger goal of building communities liberated from the capitalist paradigm.

Over the course of a year, the A-APRP has served many hundreds of nutritious meals to students–all students, as all people are encouraged to attend–better assuring they are ready to learn when they get to school. But the students are fed knowledge as well. They have learned elements of Twi, a language spoken by over 9 million Ashanti people, most of whom live in Ghana, and they have discussed African folk tales. They have been talked about the exploitation and injustice that for centuries have been brought upon African people and continue to be brought upon them by European and US colonizers. Much like the food the students eat, this information is better balanced than what is provided by Portland’s schools.

The need for the program is clear for many reasons. On the local level, New Columbia has the highest concentration of African people in Oregon. Despite Portland’s billing as a liberal beacon, systemic racism–perhaps most obvious in the police force which has been cited by the Department of Justice for its poor relations with communities of color, which the City appears reluctant to reform in any meaningful sense–runs deep here. In that larger national picture, Black people continue being gunned down by police and vigilantes at an alarming rate of one every 28 hours.

More holistically, Donald Trump’s march toward the Republican nomination for president has once again brought to the surface the virile racism that despite assurances following Barack Obama’s election to the White House in 2008, has never died. The Democratic Party’s soft-pedal version hits those same rancid notes, but with a language more acceptable in liberal circles. Even Bernie Sanders, who has taken the imagination of the progressive-liberal wing of the party, has not been immune to this. When asked during one of the Democratic debates how he would improve race relations, Sanders replied, “What we will do is say instead of giving tax breaks to billionaires, we are going to create millions of jobs for low-income kids so they’re not hanging out on street corners.” Contrary to the popular image, not all young people of color are hanging out on street corners, a description that has implications of laziness, and as portrayed in corporate media, one that is often equated with dangerous people, in particular, young Black men.

Spoken in loud volumes or soft undertones, racism has remained strong in this putatively post-racial era. And the capitalist infrastructure that undergirds it vigorously endures. As Adrienne Cabouet, a member of the A-APRP who often attends the breakfast program, noted in a speech at Portland’s May Day rally, “We must understand capitalism to be the origin of our oppressions. We must understand white supremacy, racism, and patriarchy as the ideological products of the most destructive economic system the world has ever known. We must understand white supremacy, racism, and patriarchy as lies–absurd lies–manufactured to justify genocide, theft, brutality, and slavery all over the world. We cannot destroy racism, white supremacy, and patriarchy without also destroying capitalism. We cannot hope to to destroy capitalism unless we transform ourselves.”

These young people at the breakfast program are learning that there are alternatives, and they are witnessing some of them in action. They are seeing members of the community working with each other to craft those alternatives; to model on a small level what another, more humane system might look like. The food is donated by local groups and markets such as Vegans of Color, the Alberta Cooperative Grocery, and Food Not Bombs, as well as other community members. Brian and Tereza Bottman, the owners of Columbia International Cup, provide the space for free, and Brian can often be seen cooking pancakes and other breakfast items. jamilah bourdon, also of the A-APRP, is a constant presence, biking from across town through all the manner of weather that comes upon Portland, reminding the students of the value of persistence. 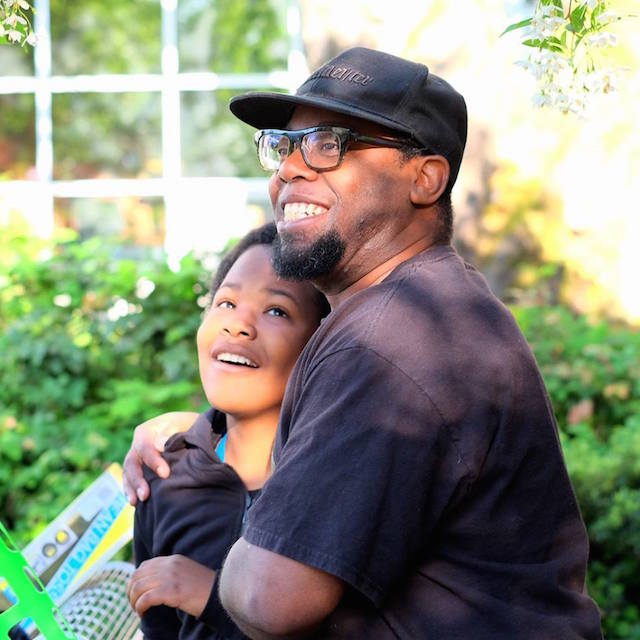 The young people who show up for A-APRP breakfasts are seeing the transformation Cabouet mentioned. And they are taking part in it.

Outside at the tables, Jaiden and Ja’waun answer Umi by mentioning coltan, the “special material that’s put in phones” that is mined from Africa–a small strand of the continuity of a long, brutal history of Euro-American imperialism that has kept large numbers of Africans, including some in New Columbia, poor and oppressed. Emmanuelle remembers a lesson about the great civil rights leader and organizer Fannie Lou Hamer. And Habakkuk recalls that SWAT teams gained popularity with many city police departments in the 1960s as Africans revolted against their oppression.

It appears to be a light breakfast day. There are some apples, juice, and veggie-scrambled eggs. But this is a day of celebration. A one year anniversary is something to be proud of, and as such, Brian has also brought donuts. Soon Umi is breaking out a bag of presents to thank the students for helping the program grow. Emmanuelle gets a bean bag toss, while Habakkuk unwraps Mastermind. Ja’waun gets a game set that includes chess and checkers, and Jaiden opens a box with a couple of long plastic mitts and a ball that resemble the equipment used in jai alai. Consistent with the overall theme of the program, these gifts nurture both body and mind. The greatest marker of success of the program may be that these young people happily share their presents with each other.

The real work of creating a more just world takes place in understated ways. While it is the big events such as large marches and demonstrations that grab headlines, those seemingly singular events are the result of weeks or months of behind-the-scenes hard work. Educating and organizing is grinding and grueling, and at times it can seem fruitless, particularly if one is looking for quick results.

But the work pays off. The A-APRP is addressing some of the needs of African people in Portland, and it is also teaching about and setting an example of what an alternative, transformed society might look like. To further those ends, the A-APRP has been working with parents in New Columbia and other organizations to start up a “revolutionary weekend school” in July, building upon the lessons of the breakfast program.

Change happens slowly. But it does happen. Not by the grace of those who control and wield power, but because of the hard work of those travailing to wrest that power from the hands of the few into those of the many.

The A-APRP free breakfast program is held on Monday and Friday from 7AM to 8 AM at Columbia International Cup coffee house, located at 9022 North Newman Avenue.

For more information on ow to register for the program and how to donate to it, go to: http://www.aaprporegon.org/store/c1/Featured_Products.html