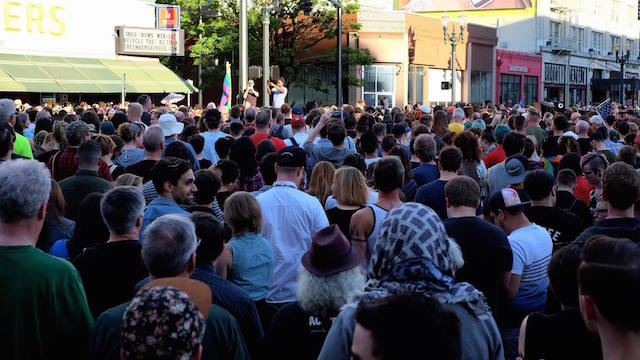 As I type, it’s been about 36 hours since the horrible news came out of the Pulse nightclub in Orlando, Florida: 49 people dead, 53 people injured. Many of them people of color. Twenty-three of them were of Puerto Rican descent. The news is saturated with coverage of the massacre and the investigation. Depending upon where you tune in, there are all sorts of questions awaiting answers, the same questions that get asked time and again when awful stuff happens, as well as the same questions that should get asked, but never do, when the victims are deemed unworthy.

Sarah Palin, the former Alaska governor and candidate for Vice-President, has uttered some of her inimitable vitriol, claiming, “We’re dealing with a deadly, evil ideology that’s embraced by those who live a lie…they love death more than life.” I knew it was only a matter of time before she waded into the waters, her fame clock seemingly stuck at 14:59. I don’t spend much time on Sarah Palin’s musings, or at least how she presents them. Her content, however, is always worth taking seriously.

In some circles, I suppose this was part of a major foreign policy speech by Palin. In it, she took Speaker of the House of Representatives Paul Ryan to task for his tepid response to the murders in Orlando, for refusing to talk about what the fear mongers at Breitbart and so many other right wing media outlets call “radical Islam.” She also likened Republican presidential nominee Donald Trump, who only hours after the massacre took to Twitter to thank people for congratulating him for “being right on radical Islamic terrorism,” to a “blue collar billionaire in touch with the people.” Two rotten peas in a rancid pod. Two very damaged people who in a more rational society–one that truly valued people for their humanity instead of seeing them as commodities–would be isolated and studied.

Over the course of his administration, right wing sorts have taken President Obama to task for not using phrases like radical Islam, which I suppose is the international version of Black on Black crime, obscuring history and deflecting attention from real problems such as US capitalism and its accompanying imperialism. I am not sure why folks like Palin feel the need to hear that term. Perhaps their bloodlust requires it to make some sense of the relative lack of focus in US foreign policy whose architects don’t care who they bomb as long as it promotes capitalist expansion.

H. Rap Brown once said that violence is as American as cherry pie. While people like Palin and Trump are trying to put the focus on Muslims, the reality is that Omar Mateen, the man who shot the people in Pulse, was born and made in America, a country that was founded on the stealing of native land and built upon the backs of enslaved people from Africa. A country that has inflicted horrific violence both overseas and within its borders, while paying lip service to creating a freer, more just world. 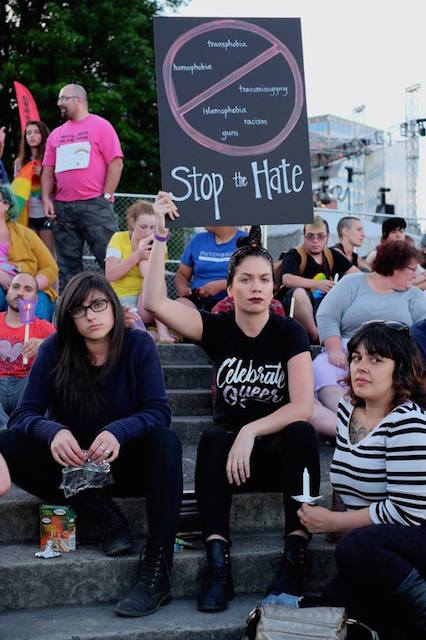 I imagine Mateen probably heard this phrase, in some form, which has been running through my mind: love the sinner, hate the sin. Every so often I hear that line from someone who identifies as a Christian, applied to people who are lesbian, gay, bisexual, or transgender (LGBT). It creates a separation where none exists. The so-called sin is the so-called sinner.

There is a lot to unpack in that. First, it relies on the fallacy that people choose to be LGBT. People may choose to engage in sexual activity that some people categorize as LGBT, but who they are is, to use a phrase, just as God made them. For those who believe God is infallible–and really, shouldn’t knees, backs, and the fresh hell that qualifies as pizza here in Portland show this to be false?–there is a dilemma because if being gay is a sin, and God created gay people, then God made an error. Or perhaps the error is in thinking being LGBT is a sin because by the same logic, God, in His perfection, created LGBT people too. So why, if there is such a thing as sin, is condemning people for who they are not a sin?

Second, it is bullshit. Complete, total, and utter bullshit. According to the American Civil Liberties Union about 110 pieces of legislation designed to treat lesbian, gay, bisexual, and transgender as second-class citizens–that is, deny them their civil and human rights–have been introduced across the US this year. These have nothing to do with the so-called sin. Nothing. They are all about demonizing, dehumanizing, and hating people who are LGBT. And they are not being written by Muslims.

What becomes interesting is that people like Palin so easily and readily call out Muslims for being atavistic agents of repression while they engage in and promote hateful acts of repression themselves. These are the people who have brought to our lexicon phrases such as “legitimate rape” and “unwanted sex,” both of which obfuscate a simple word: rape. They have also justified rape because “she was asking for it,” a phrase used to excuse rape because a woman was drunk, wearing “provocative” clothing, flirting, or generally having a good time, and thereby deserved to be raped. Even so-called progressives can engage in misogyny, as numerous women activists in Portland can tell you.

And this just in from Gawker. It seems Mateen frequented Pulse and used a gay dating app. If true, there is perhaps a link to be made. Here is what happens when toxic masculinity combines with the self-loathing produced in a society that says a LGBT people’s very existences are wrong.  Larry Craig helped craft legislation to oppress LGBT people. Ted Haggard told LGBT people they would be going to hell. Sow hatred; reap death. And, of course, it helps when there are virtually no restrictions to purchasing an AR-15.

Perhaps, as some reports have it, Mateen was in league with Isis. Maybe so, but he spent 29 years as a US citizen. He was born here. He was raised here. He learned to hate here. He killed here. He is our very own homegrown radical American terrorist.

In Portland a candlelight vigil was hastily thrown together for Sunday night while people were still reeling from the shock–and those who boycott commercial media were first hearing about the massacre. Despite the last-minute nature of the vigil, over 2,500 people on Facebook said they were going. The standing crowd filled NW Broadway between Burnside and Davis, centered on the podium at The Embers Avenue, a sprawling gay bar and nightclub at the intersection of NW Broadway and Couch.

In the crowd, two people, who perhaps were partners, wore shirts reading, “Two men kissed.” This was a reference to reports that Mateen went on his rampage because he saw two men kissing, and this disgusted him. Two men, perhaps in love, and certainly happy in each other’s presence at that moment, sent him into a rage. In a society where “pro-life” is so often synonymous with anti-woman, where non-heterosexual relationships are often regarded as deviant or evil, and where too many people feel–and are–empowered to hurt and even kill other people who are not like themselves, I am sometimes surprised people like Mateen don’t come along more often. 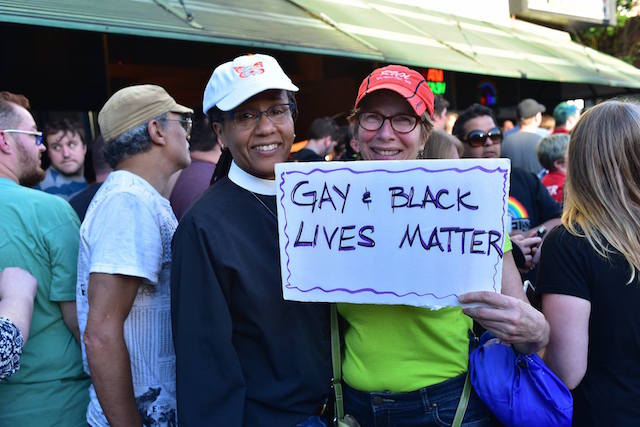 But I don’t want to end on a stone bummer, nor even a minor one. At least a couple of thousand people came out to that vigil outside The Embers Avenue on Sunday night. Another several hundred attended a slightly later vigil organized by the Trans Community and held at Salmon Fountain along the waterfront. Both vigils were wondrous and wonderful. They displayed people at their best, reaching out to each other with tenderness, compassion, and courage. Strangers hugged each other. People handed out bottles of cold water, Voodoo Donuts, gifts of flowers and candles. They told each other their stories, sang, held hands. In a dark moment, this was Light.

For more light, I leave you with the beautiful words of a friend whose eloquence goes far beyond anything I could ever give:

My heart is so heavy right now, I’m filled with grief and anger. My heart goes out to all my LGBT friends and the greater LGBT communities for enduring yet another act of atrocious hatred and violence against our bodies and our humanity. I want to extend my love and solidarity to all of you.

I also need to say that as sensationally violent as this attack was, it shouldn’t overshadow the violence and abuse that the LGBT community endures daily. We are mocked and ridiculed, beaten and murdered, queer children are thrown out of their homes by hateful parents, or they run away because their parents are violent, abusive, and cruel. I don’t know one LGBT person who hasn’t been bullied or harassed, many of my friends have been physically attacked multiple times. Many LGBT people take their own lives because they simply can’t endure what it takes to keep living.

We’ve been dying all along and we will keep dying. The fifty people killed last night are just another drop in the bucket of hateful violence directed at our communities, just a few more dead queer bodies to toss onto the pile next to Matthew Shepherd and Lela Alcorn and all the rest.

Which brings me to Pride. It’s pride month and sometimes people say, “I don’t understand what gay people have to be so proud of.” And if you’re still confused about it, it’s this: our survival. We face this hatred and violence every day and we keep living. We leave our houses and we go to work, or school, or whatever. We don’t know when or where, but the next assault on our humanity is just around corner. It could be a mass shooting or a bigoted law about which bathrooms we’re allowed to use. We don’t know when or where or how or what, but we know it’s coming.

Love and solidarity to all my queers out there. All of you are in my heart today.