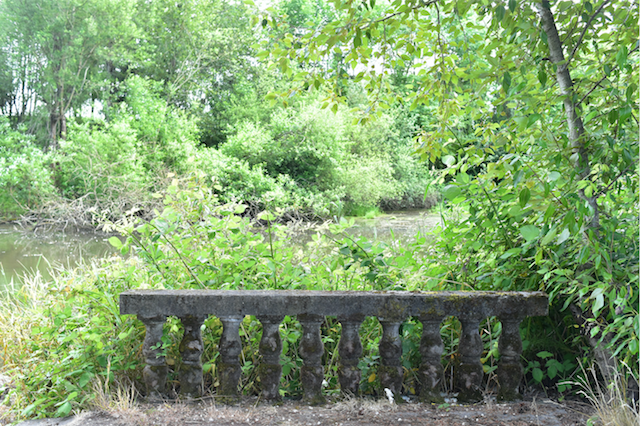 Done crept through this town.

History is written by the victors.

The Memorial Day weekend, as always, was a contest of competing histories. My better 99% and I took in a few of the programs that were part of the Vanport Mosaic Festival, a remembrance of the city that once lay in the floodplain between the Columbia River and its slough, between North Denver Avenue and what is now the BNSF Railway. Protected by levees and a railway berm, Vanport was built essentially as barracks for people working in the Kaiser Shipyards during World War II–people who were not wanted in Portland. The city was literally wiped off the official maps on May 30, 1948 by a great flood which swept it away: after a very wet Spring combined with snowmelt to swell the river, the railway berm–which also provided something of a levee–burst. The city existed for six years and numbered as many as 42,000 people–including veterans. It was the second largest city in Oregon, but it has now been replaced by the Portland International Raceway, the Herons Lake Golf Club, and a wildlife preserve.

Very little remains of the Vanport infrastructure, which makes sense, since nearly all of the city’s 447 buildings were made of wood and set on wooden foundations. Its lowest point was 15 feet below sea level, so perhaps any foundation would have been doomed in the flood. On Memorial Day, we went to the race track to walk a 5 kilometer loop that along the path provided information about the former city’s structures. Tables under canopies pointed out where schools, the hospital, a bus station, and other buildings once were, with photographs showing a community going about its daily life.

Any sort of concrete evidence that Vanport existed is difficult to see. There literally is one such, a slab of concrete that was part of a theater’s foundation. Now the Mud Slough gently meanders just beyond it, with the golf course to the right and the race track to the left, so it is difficult to imagine that theater in use. It was open nearly all hours and held 750 people.

Further along the Mud Slough, a sign points across the water to where an administrative building once lay. An old concrete balustrade and staircase leads down to the slough and may have been part of a larger building which once stood atop the now gravel covered lot.

What does remain is memory. On Saturday May 28, we were lucky enough to attend Cottonwood in the Flood at the Interstate Firehouse Cultural Center. The play centers on a Black family from Selma, Alabama who move to Vanport so Lonnie can work in the shipyards for a much higher wage than he now earns. Lonnie’s son Henry narrates the play, both as the young boy whose family made the trek Oregon in 1943 and as an adult who much later in life looks back upon his days in Vanport, his father, his father-in-law, Granddaddy Kenyon; and his wife Alma, who clearly is the family engine. Another son, Will, has joined the army, and after the war, he too settles down in Vanport. When Will returns from the war, he searches for work, but he is denied employment because of his skin color, and as well he must endure bigoted taunts. This is what he risked his life to preserve, it seems. However, he and his wife Lola open a dance academy which proves successful. 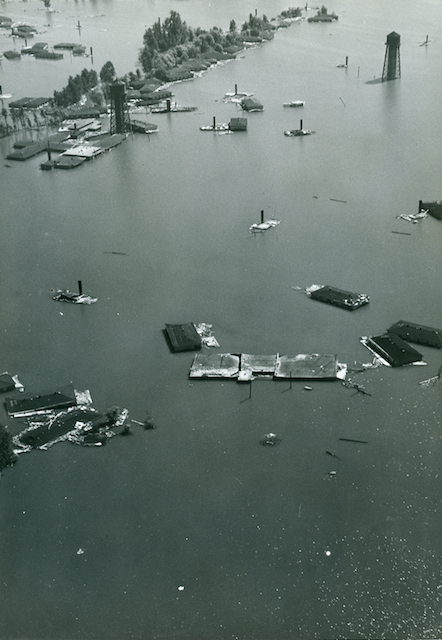 I presume the characters are composites of actual Vanport residents. Oregon was a free state during the Civil War, but the desire to keep the state as white as possible included keeping slaves outside Oregon’s borders and exclusion laws that denied Black people basic rights. In 1940, less than 1,800 Black people lived in Oregon. Just as in Selma, Vanport’s Black people found their neighborhoods segregated, even though that was not an explicit policy of the Housing Authority of Portland (HAP) which administered Vanport’s housing. However, other aspects of Vanport were integrated. Henry attends a school dance and takes to the floor with a young white woman who cannot understand why Henry is nervous about dancing with her. The audience knows that Henry recalls his mother’s admonition that he should mind his actions lest he find himself hanged from a cottonwood tree by a white lynch mob.

Vanport was built shoddily because it was never supposed to outlast the war. It was a temporary city for a temporary need. But public housing had never appealed to the citizens of Portland. In 1938, the city opted not to take the large amount of federal housing money it was offered, making Portland the largest city in the country without a federal housing program. That lack of public housing, combined with racist and classist attitudes, helped keep Vanport afloat following the end of World War II, even as its population dwindled due to the lack of demand for ships of war. By the time of the flood, the population of Vanport had dropped to about 18,000 people, but there were still few welcome places for these people in Portland.

On the morning of May 30, 1948 Vanport residents, who had been wary of the rising waters surrounding them, received a typed message from the HAC at their homes informing them all was well and there was no reason to panic. “The flood situation,” it read, “has not changed since the prediction made last Thursday that the highest water will come next Thursday, that the dikes were high enough and strong enough to withstand the crest, and that barring unforeseen developments VANPORT is safe.” Its final words are, “DON’T GET EXCITED!”

A little after 4 PM, the water breached the railroad berm. Thirty-five minutes later, Vanport was going under. By nightfall it was destroyed. Photos taken at the time show ravaged apartment buildings torn from their slipshod foundations, cast upon the water like large, roughly torn crusts of bread. Fifteen people died, although in Cottonwood in the Flood, the narrator Henry suggests there were more.

Cottonwood in the Flood does not present the Vanport deluge as a moment in time, but rather as part of a continuum of marginalized and oppressed people resisting and struggling for something better. The flood brought that resistance and struggle to Portland, with a Black community taking hold and flourishing in the Albina neighborhood surrounding Williams Avenue. But much like Vanport’s residences built on and of wood, it was not meant to last. Redlining assured that very few Black people owned their homes, much less owned property outside of Albina. Soon, urban renewal saw the Rose Quarter and the surrounding interstates cut into the heart of the Black community. In 1970, Legacy Emanuel hospital, with the support of Portland’s government, demolished houses, took the plot bounded by North Williams Avenue, Vancouver Avenue, Russell Street, and Knott Street–which only in the past couple of years has shown signs of actually being used as anything more than field with a parking lot–and tore another hole in the Albina neighborhood.

Redlining as a practice has technically ceased, although subprime mortgages, which were often foisted upon people of color even when they qualified for a prime loan, continued the basic process along with the recent foreclosure crisis. Gentrification has now pushed a large number of Black people from the Albina area. As rents soar, Black people–as well as other people of color– are being driven from their homes to the fringes of Portland, or beyond. 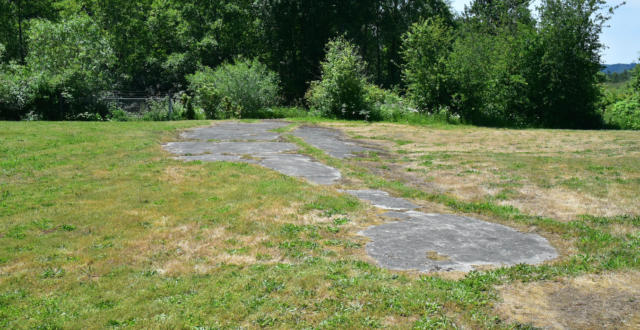 The foundation of the theater that once sat 750 people, one of the few remaining physical pieces of Vanport. Photo by Pete Shaw.

Which is where Vanport once lay.

Portland likes to bill itself as a liberal city, one which welcomes all sorts of people. But it has never been welcoming toward Black people. Oregon’s founding as a white utopian state–on land stolen from indigenous people–points to that. In 1943, in an article in the Oregonian, Portland Mayor Earl Riley commented, “Portland can only absorb a minimum number of negroes without upsetting city life.” And it is notable that Vanport’s housing was never improved despite it being built for the short term, yet in the end clearly intended for long-term use. The Black people who lived there were never welcome in Portland. Today, institutional forms of racism remain, most prominently in the form of a police department whose relations with communities of color, according to a 2012 Department of Justice report, is “tense.” Who needs cottonwood trees when you have a badge and a gun?

The Community Oversight Advisory Board (COAB), formed according to the Settlement Agreement between Portland and the Department of Justice, is charged with suggesting unbinding reforms to maybe, possibly, perhaps–pretty, pretty please?–change this. It seems like the members of it have been having pleasant conversations, but especially with a few of those members being police, it is hard to see how anything other than the City giving itself a gilded star can come from it. It seems like it was meant to fail or at least accomplish nothing more than create the illusion of change.

That is one of many reasons not to forget Vanport. Its history is deeply woven into the history of Portland and Oregon. On issues of race, it is part of a continuum. The state, much like the country as a whole, has never truly reckoned with its history and legacy of racism. So much gets swept away because so many truths are inconvenient, contradicting the official history. While Charley Patton was singing about the Great Mississippi Flood of 1927 and the racial disparity and injustice it exposed, his song has flown through time and space, passing through Vanport, and more recently, New Orleans. Its continued relevance is haunting.

In Cottonwood in the Flood, Lonnie tells Henry that although cottonwoods were used for the lynchings his mother warned him about, they are strong trees. He says you can bend them every which way and knock them down, but they will get back up. They are tough and resilient. In the quarter-mile south toward the racetrack along North Expo Road from the Expo Center Max Station, near the site where Japanese and Japanese Americans were herded before being shuttled off to concentration camps during World War II, there are quite a few cottonwoods. The breeze off the Columbia River sends their seed aloft, drifting like summer snow over the area where that was once Vanport.

It is now gone. Many of the people who lived there have also departed. Some went back to their former homes. Some established themselves in Portland. Most have passed on. What remains is memory. What becomes of that memory and how it informs the present and future is up to us.

Cottonwood in the Flood plays at the Interstate Firehouse Cultural Center through June 12.  For more information on the play, as well as how to purchase tickets, go to: https://www.facebook.com/CottonwoodInTheFlood/

2 comments for “Down in the Flood: Vanport’s Living Memory”