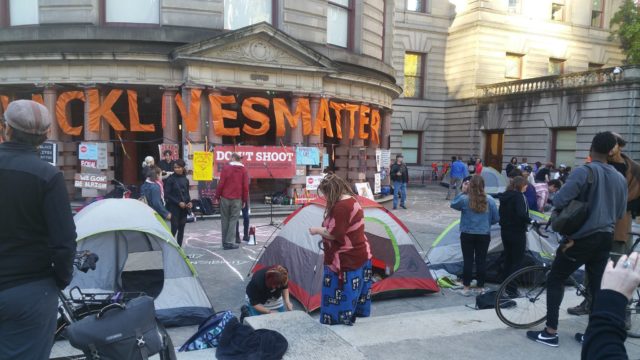 Let’s skip the formalities and conventions and get right to the point: Mayor Charlie Hales, Commissioner Nick Fish, and Commissioner Amanda Fritz are racists. They are dangerous racists whose recent support for the new police contract shows a complete disregard for the lives of people of color–particularly Black people–and an equally callous ignorance of the harassment, humiliation, intimidation, brutality, and murder the Portland police inflict upon communities of color, particularly Black communities. In supporting the pact, Hales, Fish, and Fritz have afforded even more protection to a police force with a well-documented history of racism and excessive violence.

Obviously Hales, Fish, and Fritz do not run around waving Nazi flags, shouting racist obscenities, and wearing Ku Klux Klan outfits (although Hales did reinstate Mark Kruger to the police force despite the man setting up a shrine to his fallen Nazi heroes on Rocky Butte). But they do represent this city, and they have the power of crafting and passing many of the rules and laws by which we live. One might hazard a guess that by now, after video upon video upon video of police murdering Black people, the police would be understood as an institution that wields inordinate power often at the expense of people of color.

And that is why Hales, Fish, and Fritz are dangerous. It is bad enough that the months-long negotiations between Hales and the Portland Police Association (PPA) were kept secret until a draft of the contract was released about a month ago. The lack of public input alone should have made the rest of the council members–if they cared–not just oppose the contract on the most basic of democratic principles, but as well condemn Hales for his clear contempt for those principles. 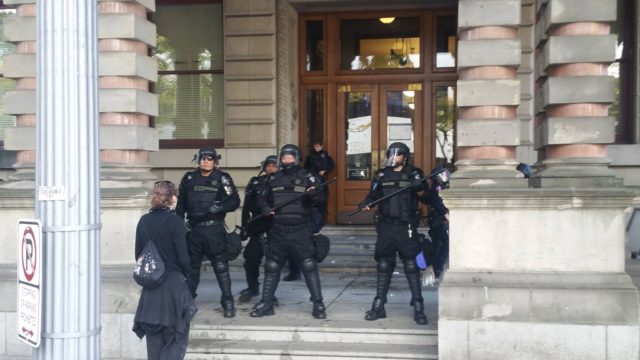 But the contract itself is, as Portland NAACP president Jo Ann Hardesty wrote in an Oregonian column “nothing short of criminal…(it) is woefully inadequate and will lock us in for another six years of the same old, same old pretend reform package that we got under the last contract talks. It reflects the narrow focus on money rather than vision and does not reflect the will or voice of the community.” Among those items valuing money over wisdom noted by Hardesty are allowing retired officers to be hired back for six years at the top of their pay grade and ensuring that the most expensive police officers are assigned to overtime first instead of an employee or officer not so high up the ladder, even if better equipped to deal with the situation. Combined with an increased starting salary and $6.8 million in raises, the contract largely rewards the PPB for its behavior. It reveals an all too typical view of the police that sees only a few rancid apples instead of whole barrel, rotten.

Ensconced within the report was a small section on the Portland police’s race relations, noting “the often tense relationship between the PPB and the African American Community.” Noting that racist policing was beyond the scope of the investigation, the report stated that some members of communities of color “perceive” a pattern or practice of “bias-based policing.” A person quoted in this section of the report said, “They protect the white folk and police the black folk.” Despite not being part of the investigation, this section of the report was a stinging indictment of racism both within the PPB and between the PPB and communities of color. 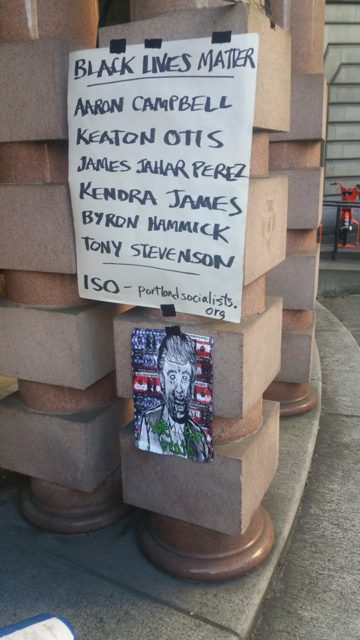 With such an endorsement, one might think Hales perhaps would have considered inviting the public, particularly members of the Black community, to weigh in during the contract negotiations. And as well, one might think the City Council would have demanded at least as much.

Sure, there have been the putative accountability groups set up through the DoJ-City of Portland Settlement Agreement, seeking public input for how to reform the PPB. I attended three of those Community Oversight Advisory Board (COAB) meetings. The inaugural one featured nearly 80 minutes of the PPB dispensing propaganda and members of the business community all but presenting honorary halos to the police. To call the night a sham would be an understatement. The others I observed were exercises in futility, albeit some of it well meant. Really, what is there to say when police are part of a group that is charged with coming up with ideas to reign in the police? That’s called inviting the fox into the hen house. After all the COAB had no legal power. Its job was to recommend reforms. The City Council could consider those recommendations or throw them in the waste bin.

I finally stopped attending those dog and pony shows. It was at best a form of dark entertainment, a strange inversion of a show trial. At one of the meetings, a COAB member began talking about how nice one of the policemen on the panel was. Regardless of how true that is, one might ask Black people–who according to the PPB’s 2013 Stops Data Collection while making up only 6.3% of Portland’s population, compose 12.8% of total police driver stops–how they feel about how nice the police are. Or perhaps the Black people who make up 22.9% of police stops of pedestrians. Why not invite those who survive Kendra James, Keaton Otis, Aaron Campbell, and the other women and men murdered by the Portland police to talk about about how nice the police are? And most importantly, why not take them seriously?

This contract disrespects these people and sends a message to all people of color that their concerns are not taken seriously.  It shows that in the eyes of the Portland City Council, their lives do not matter.

One recommendation that presumably came forth from the COAB was the use of body cameras that police would have to wear and turn on prior to every encounter. Again without public input, Hales apparently negotiated this issue with the PPA, resulting in a draft of an arrangement that in her column Hardesty called “the opposite of an accountability policy.” Proposed rules regarding body cameras did not make the final cut for the contract and will be negotiated with police at a later date. But the draft of the prospective rules does not bode well.

“As proposed,” Hardesty wrote, “police would be allowed to review video before writing their reports. Why would police need to see video before writing a report unless they need to make their report match what’s on the video tape–and possibly omit actions that weren’t caught on camera? This is totally unacceptable since the public has no access to the video…The body cameras become expensive tools only beneficial to police, doing nothing to contribute to transparency and accountability that is the expectation of the public in this new era of policing in America.”

So a police force that has been subject to a federal investigation reaching damning conclusions–because even by our very violent cultural standards it has gone too far–is close to being granted one more tool for covering up its crimes and shaping its stories, now with its own privately available in-house video fact checker. I guess it was in the spirit of compromise that the rule giving police officers involved in a shooting 48 hours before they can be questioned has been eliminated. That is certainly important, but why are the police entitled to either? 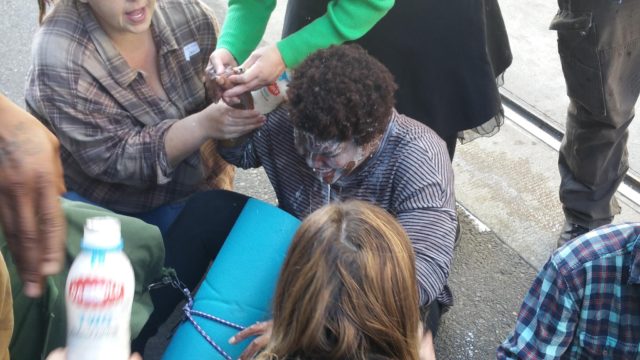 In her Oregonian piece, Hardesty rightly takes the mayor and former Police Chief Larry O’Dea–the guy who shot someone while on vacation, but thanks to Hales, it was kept undercover for a short spell before seeing the light of day–to task for locking the public out of the negotiations surrounding how body cameras would be used. She then asked, “How can the public have any confidence in a tool that is supposed to create transparency yet is developed behind closed doors?”

The answer is clear: we cannot and we should not.

Certainly, some people involved with City governance do not.

Wednesday brought a sight that was a satirist’s dream. Hales, apparently tired of disruptions of recent council sessions over the contract, adjourned the meeting after 30 minutes and retreated to another room from which the rest of the session was livecast. Meanwhile, police locked down protesters, including some who wanted to give testimony, in another part of the building. Police, riot and otherwise, descended upon City Hall as their contract was being voted upon and City Hall was being interrupted by citizens opposed to the mayor’s secret negotiations and lies, as well as his, Fish, and Fritz’s votes to completely ignore the history of racist police violence in the city they are supposed to oversee. Institutional racism asked for a pass, and Hales, Fish, and Fritz gave it. 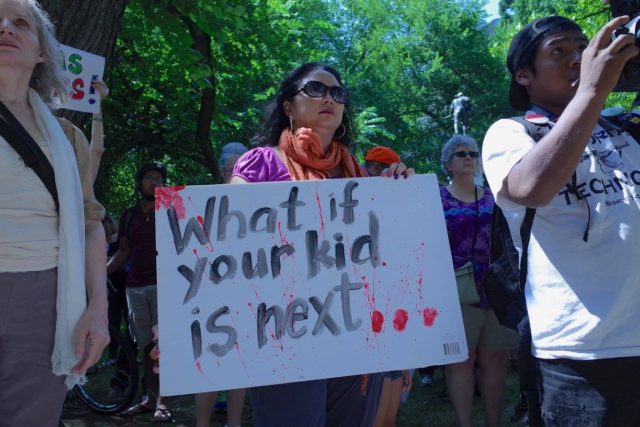 The police predictably exercised their power, violently ejecting peacefully assembled protesters from City Hall. They used pepper spray and batons, and left at least one person with a broken bone.

Mayor Hales is their boss, and on Wednesday, they were his goons.

In a public letter to Hales, Gregory Robert McKelvey, an organizer with Don’t Shoot Portland who was in City Hall at the time the police, had this to say to the mayor:

Hales, Fish, and Fritz have now emboldened the police to do more of the same, and worse.