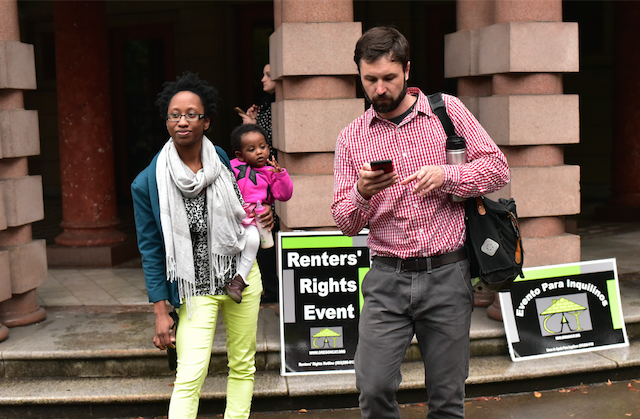 Justin Buri, the former executive director of the Community Alliance of Tenants (CAT), an organization that fights for renters and their rights, died on Tuesday, November 1. He was 36.

I will not pretend that I knew him, but I did have the pleasure of talking with him a few times while covering various events surrounding the Renters’ Crisis that the CAT first declared on September 15, 2016, in Peninsula Park. It was obvious from his work that he cared about people. And if I may say so, I was pleased to be inconvenienced by that care.

A nice story is in order. Yesterday, as the news broke, people began reposting on Facebook Buri’s riveting testimony in front of City Council in early October of last year. I was in the balcony that day, covering the event. I forget how long Buri spoke–maybe four or five minutes. After about a minute I stopped taking notes. It was very clear that this was something special, and it demanded to be heard. I could easily enough go home, listen to it again on some Portland City government website, and take my notes then.

That was a very good decision then, and it seems a better one tonight as I deal with the strange emotion of feeling very sad that, in the words of Woody Guthrie, another man’s done gone, but knowing that person almost 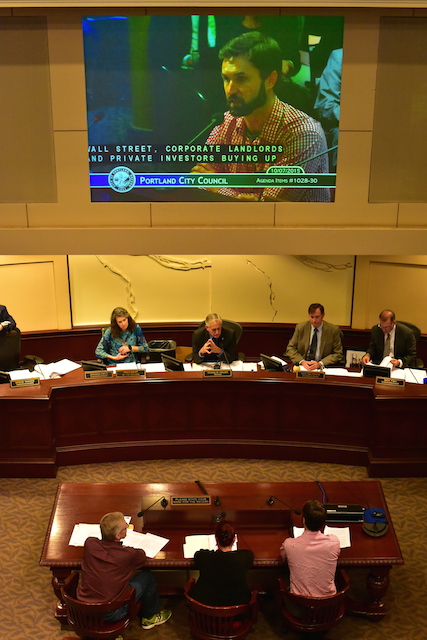 exclusively from his work, not his person. I approached Buri outside council chambers after his testimony to both tell him how impressive he had been, and as well ask him a few questions. He was talking with someone from the CAT, so I waited. And waited. Then someone else approached, and so I waited some more. Finally, maybe 20 minutes later, he finished talking with those who needed his words and Wisdom for far greater and more urgent reasons than I did, and turned to me. I told him my feelings about what he had said, asked him a couple of questions, and then noted that I had to get home and watch the footage so I could take down quotes for the article. Very kindly, he gave me the transcript of what he said.

Those pieces of paper, I am quite sure, lie in a box to my left. I have two boxes in this room with a bunch of paper in them. One, behind me against the back wall, has envelopes as well as a slew of notebooks varying in size, most of them filled with notes from various events about which the Portland Occupier has written. It would seem logical that his words be there.

But they are not. The box to my left contains letters and other documents of memory and inspiration. Every so often I will sort through it, pull out something, and read it. Memories reconstructed can placate a soul, however listless.

Perhaps later tomorrow I will do that. The weather cognoscenti tell me it will be a beautiful Fall day, and as I always do this time of year, I will hope for that warm, golden glow that comes with the late afternoon sunlight that can be so rare on a November day in Portland.

Just off the back porch lies a magnolia, a type whose leaves this time of year, help define my perfect Autumn. They are amber with brown veins, although soon enough their undersides will begin turning gray. When that low, descending sunlight hits them, they are beautiful. As with the season, they remind me that, as George Harrison sang, all things must pass, and that they do so at their own right time.

That, I think, will be a perfect moment for reading those words, adamant in their demands and compassion for so many left behind by a system that values profit over the lives of people.

And for reminding myself that every Autumn is eventually followed by a Spring.

3 comments for “A Memory of Justin Buri”