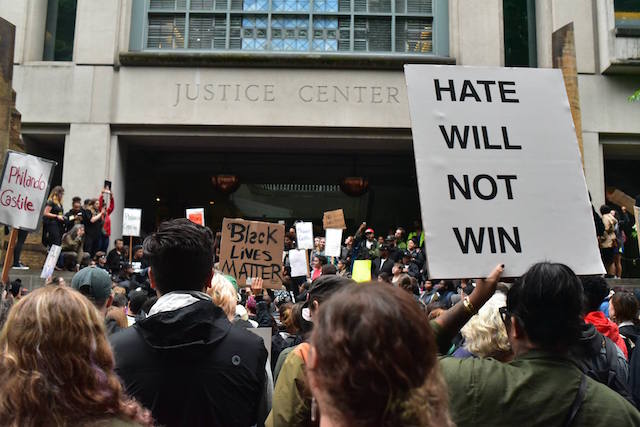 So here we are, not long after an election that saw the man who will become President of the United States spending over a year hurling invective against just about everyone not a white, straight, Christian male, that has now clearly encouraged blatant and aggressive bigoted actions. Clearly, we must gather ourselves together, steeling for the fights to come. As such, this Thanksgiving, more so than usual, will give us ample time to reflect on the white supremacist settler, colonial, and imperial underpinnings of the day, as well has how to organize and defeat them.

But it also should be a time of thankfulness, for reflecting on the many gains that people have made toward greater justice, as well as how we can continue that work. So in no particular order…

The All-African People’s Revolutionary Party continues moving along. It’s free breakfast program has for the moment been shuttered, but the other component of that program–education–has expanded into the formation of the School of African Roots (SOAR). I have been unable to attend any of the classes which are held on Sundays from noon to 2 PM at the Abbey Arts Center in North Portland, but from what I have read, it continues the A-APRP’s mission of moving “forward ever, backwards never”–in this case in the education of young African people. Thank you.

Earlier this year some employees at Burgerville formed the Burgerville Workers Union to fight for safety on the job, dignity in their work, and greater wages. It is a union of, by, and for the workers at Burgerville, but it is built upon a deep consciousness of class and race, and sees itself as part of a wider workers’ movement. Its sense of workplace democracy is refreshing, and its actions are creative. Slowly but surely it is peeling away Burgerville’s facade as a corporation that supports community values. While the locally sourced ingredients for burgers, onion rings, and milkshakes separate Burgerville from larger fast food chains such as McDonald’s and Burger King, its commitment to poverty wages for its employees and its treatment of those workers does not. Thank you.

The Trans Pacific Partnership is, for the moment, dead. That is the result of many hard years of organizing and education by many people and groups, particularly the Oregon Fair Trade Campaign. What should have been a slam dunk for corporations has been rejected. Everyone who matters, so to speak, wanted this. Multinational corporations and their lapdogs in government–including Oregon’s very own Ron Wyden and Portland’s Earl Blumenauer, as well as President Barack Obama, who in their support for corporate profits over people and environment represents so much of what is wrong with the Democratic Party–did all they could to further hurt working people. But the organizing in opposition to the TPP made passing it impossible. Thank you.

Tenant rights activists such as those composing the Community Alliance of Tenants (CAT) and Portland Tenants United (PTU) have been working hard to pressure the City to act boldly in the face of the renters’ crisis. The City has made some changes, and in the recent election, voters approved a ballot initiative that would put over $250 million toward affordable housing. And incoming City Commissioner Chloe Eudaly, who campaigned heavily on these housing issues, has clearly signaled a more aggressive approach to the problem. Despite these victories, the CAT and PTU show no sign of letting up. Thank you.

In June I attended a forum hosted by the Asian Pacific American Network of Oregon that presented a history of solidarity of the Asian-Pacific Islander community and Asian-Pacific Islander organizations with other groups fighting for racial and social justice. The panel also discussed ways to further that work. There was nothing new in what they were talking about, namely the need to reach out and work together, but I had never covered an APANO event before. It is always nice to hear about what people are doing to further justice. Thank you.

Black Lives Matter and Don’t Shoot Portland continue doing their vital work promoting what should be a simple demand, that Black bodies be treated with the same sanctity that should be accorded all bodies. Historically, it clearly has not been so, and these groups keep building upon the shoulders of their ancestors. When their demands are clearly rebuffed, such as with the Portland Police contract that Mayor Charlie Hales and City Commissioners Nick Fish and Amanda Fritz recently approved that in no uncertain terms blared that Black lives do not matter, they keep organizing and agitating. Thank you. 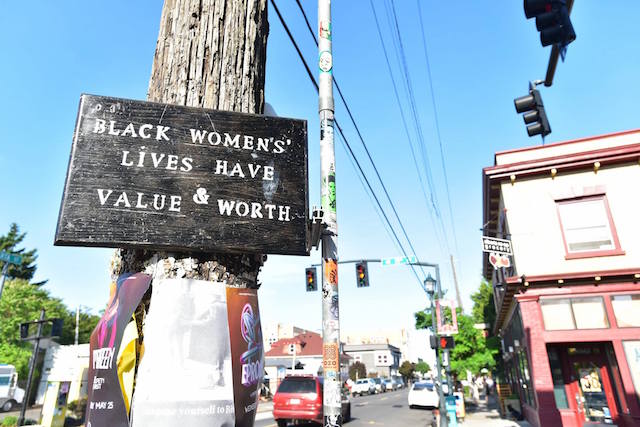 Related to that subject, Teressa Raiford, to use language often not found in a courtroom, kicked the shit out of the police and prosecutors who charged her with second degree disorderly conduct. She and her lawyer, Matthew McHenry, danced a whipsong on The City, exposing Portland Police Officer Susan Billard as a liar, and making Multnomah County Deputy District Attorney Jeffrey Lowe–who was brought in off the bench to aid the woefully outgunned Eamon McMahon–look ridiculous. It was tough being inside for some very nice April days, but seeing Lowe only a few feet in front of me, fist behind his back clenched and shaking in anger as Raiford completely controlled his cross-examination of her, made it worthwhile. Her performance was impressive–she was calm and assured, a clear contrast to Lowe who was clearly frustrated that he was not having his way as he must have expected he would– and she and McHenry exposed The City and its police as thugs. Thank you.

After the massacre at the Pulse nightclub in Orlando, Florida, thousands of people gathered in downtown Portland to pay respect to the dead and injured, as well as stand in defiance of the hatred that consumed the man who took those lives and hurt so many others. It was beautiful and brave. Thank you.

Right 2 Dream Too, the rest area for people without housing keeps up its work. Every time it seems it is ready to find a new home, something gets in the way. More accurately, some group of people–this time a bunch of business folks from the southeast industrial area near OMSI–always seem to get in the way. As with the move R2DToo was going to make a few years ago to under the NW ramp of the Broadway Bridge, testimony brought out some very horrible people. But as with that testimony from 2013, the various people without housing who attended and testified, comported themselves with a dignity and humanity lacking in their tormentors. The move to that spot in southeast has been aborted due to pressure from the business community, but R2DToo continues fighting. Thank you.

A 15 year battle between the Parks and Recreation workers and the City came to an end in February. Their agreement promised to create 130 new living wage, union-protected jobs, and that the City would recognize these “seasonal” Recreation Support staff as part of Laborers Local 483 once a majority show support for joining. As union protected employees, they will be able to collectively bargain for their wages, benefits, rights, and work conditions. Thank you.

The Justice for Keaton Otis vigils continue. For over six years now people have gathered on the 12th of every month on the corner of NE 6th and Halsey to demand justice for Otis and all those murdered by police. Otis’ father, Fred Bryant, is remembered as well for his quest to find that justice. The vigil remains a beacon of hope and memory, a long running reminder that even when things look grim, people are willing to fight to make them better. Thank you.

On November 17, 2011 eight members of an affinity group from the Portland Central America Solidarity Committee (PCASC) infiltrated a Wells-Fargo bank downtown and caused it to shut down just as that day’s Occupy the Banks march passed by. The action was taken to call attention to Wells-Fargo’s role in helping bankroll the private prison industry. Flash forward through 4.5 years of organizing and educating to a March meeting of the City of Portland’s Socially Responsible Investments Committee during which the committee voted unanimously to recommend that the City divest its holdings in Wells Fargo due to the company’s financing of for-profit prisons and its “morally bankrupt” business practices. On Wednesday November 30–next Wednesday–the City will hear public testimony regarding whether it should drop its holdings in Wells Fargo with a vote soon to follow. Thank you. 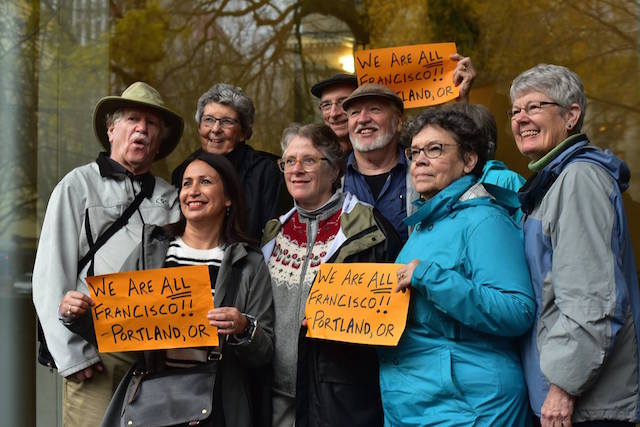 The charges against my Friend Francisco Aguirre for illegal reentry into the country were dropped over the Summer. Aguirre fought and fought and fought. He did so with the backing of numerous people and groups, too many to be named here. They had his back, as Francisco has for so many others in his work organizing day laborers. I found out last week that after all this persecution from the Attorney General and the Immigration and Customs Enforcement Agency, Francisco had been approved for his Employment Authorization Card. Despite these victories, he and his supporters continue fighting, because he has always known that this was a fight for all people without documentation. Thank you.

Portland has lost some very good people this year. Ephemerally, perhaps, Walidah Imarisha is now teaching at Stanford University, and Alyssa Pagan is stomping the terra around New York City. I miss them, deeply, but our loss is a lot of other people’s gain. Sharing your lives with us has made us better. And if ultimately lonelier, sharing your lives with me has also made me better. Thank you.

We also lost Justin Buri, the former executive director of the Community Alliance of Tenants. He was by all accounts a good and decent person, and his work, which will continue, has made a difference. I will always remember his testimony in front of the City Council in October, 2015 as he demanded the City declare a renters’ state of emergency. It struck me as the voice of a person who would not back down because he knew too many people who had no place to fall. Thank you.

I get to know many people on various levels while writing for this publication. I knew Michelle Mundt, who seemed to be at every event dealing with people without housing, for a nod, a warm smile, and an occasional hello that signaled approval. That was always kind and comforting, but now I am left wondering the intricacies of the beauty that composed that blessing. It is a warm, if incomplete, feeling. Thank you.

And as always, to my better 99%, my family, and my Friends–particularly over the course of this year, some of which has been trying–thank you. I Love you.