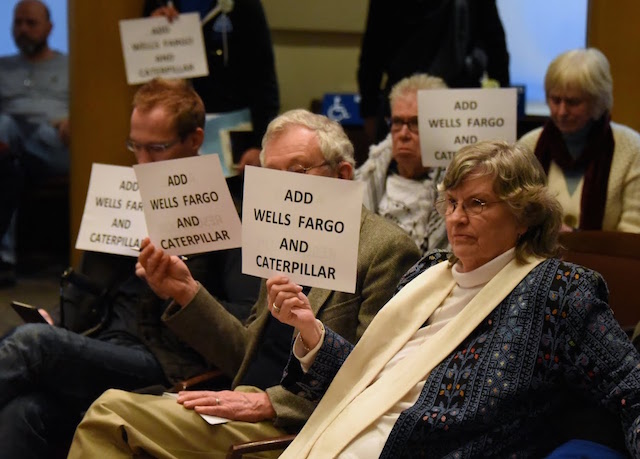 These are bleak times in the United States, although an honest reckoning shows that for many people, particularly those who are not heterosexual Christian men bearing white skin, these are perhaps more accurately times ranging between the usual and bleaker. After Monday’s electoral college balloting officially paved the way for Donald Trump to assume the presidency in January, people could be forgiven for sinking into despair. Trump’s cabinet choices so far reveal an administration that will be further dedicated to the neoliberal and general capitalist project of funneling wealth and power to the few at the expense of the many and will likely promote policies that will advance the security state, further aggravate the climate crisis, and ignore any form of climate justice, among other projects. And Trump’s administration will get to do these things with the full faith and backing of a Congress led by House Speaker Paul Ryan who worships at the altar of Ayn Rand and Senate Majority Leader Mitch McConnell who while not quite venerating, sits close by in the pews.

But as the fellas say, despair is not an option. Nor should it be. In this publication’s annual Thanksgiving piece, I mentioned that about five years after a small group of Portland activists from the Portland Central America Solidarity Committee (PCASC) infiltrated and shut down the Wells Fargo bank branch on Southwest 6th Avenue in an effort to call attention to Wells-Fargo’s funding of the private prison industry, the Portland City Council was readying to vote on the City’s Socially Responsible Investment Committee’s unanimous recommendation that the City divest its holdings in Wells Fargo because of this financing, as well as its “morally bankrupt” business practices.

On Wednesday, after broad community pressure, the Portland City Council voted to temporarily halt investing not just in Wells Fargo, but in all corporate securities. Jamie Trinkle of Enlace said, “The City vote today means Portland is joining the chorus of local governments ending investments in Wells Fargo.”  Enlace, an activist group that organizes for racial and economic justice, convened the Prison Divestment Campaign, a gathering of 25 local leading racial and migrant justice organizations, and the numerous people and groups that support its work.

During the Council session, Commissioner Steve Novick introduced an amendment to add Wells Fargo and Caterpillar–the company that aids Israel’s human rights abuses upon Palestinians, has been involved with construction of the Dakota Access Pipeline, and whose machinery used in mining and dam construction has aided environmental degradation in Central America–to the City’s “do-not-buy” list. This was followed by Commissioner Amanda Fritz adding the amendment to stop all investments in corporate securities until the City Council can return to the issue in the first few months of next year. Fritz’s amendment passed unanimously. With the Council’s decision, Portland joined the states of Illinois, Ohio, California, and Massachusetts, as well as the cities of Chicago, Minneapolis, Sacramento, San Francisco, and Seattle in cutting ties with the bank. 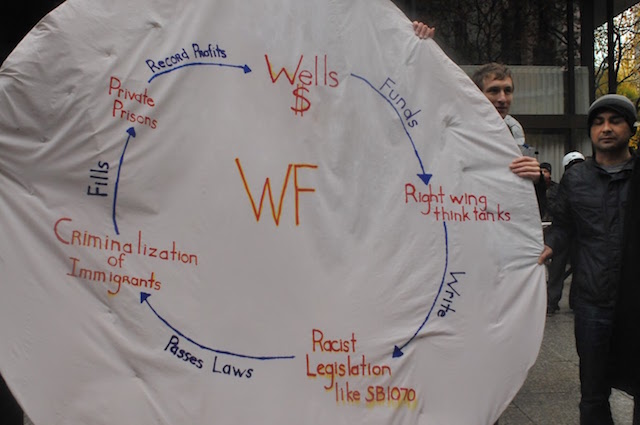 After the amendment passed, Cecelia Beckwith, a volunteer with Enlace, stated, “We applaud the city council decision and this action confirms our commitment to progressive social values and a true commitment to sanctuary. We are proud to be part of a national movement that is challenging the anti-immigrant, racist, xenophobic and antisemitic ideology of the Trump Administration.”

Leila Haile, who works in the City’s Parks and Recreation Department and also is an organizer with Sankofa Collective Northwest, said, “As a City employee who works with youth and encourages those youth to seek work with the City, I’m relieved that the City is taking a step towards not investing in Wells Fargo and private prison lenders. I won’t have to wonder how much of my paycheck is coming from the prison industrial complex.”

In between the November 2011 occupation of that Wells Fargo branch and Wednesday’s vote was the long, arduous work of organizing, educating, and agitating. In fact, the organizing goes back a little further. Those brave people who shut down that Wells Fargo branch held numerous planning meetings to figure out how to pull this off, and more importantly, how the action would play into the larger campaign. It was not as simple as going in and shutting things down. The action forcing the bank to lock its doors and shutter its windows–but not before the action was captured by news outlets–needed to be coordinated with a march of about 5,000 people that would be passing down 6th Avenue as part of a day dedicated to “Occupying Everything” as well as be just one of many steps toward the goal of getting Portland to divest its holdings in Wells Fargo.

As the march came up the street and approached the Wells Fargo branch, those protesters inside began shouting information about Wells Fargo’s funding of the private prison industry, particularly GEO Group and Corrections Corporation of America (now named CoreCivic). Outside, other PCASC members paraded a Wells Fargo wagon with prison bars and a large sign showing the cycle connecting Wells Fargo, the private prison industry, think tanks, lobbyists and the further criminalization of immigrants. The few thousand people on the street were treated to an exciting action that along with the fliers and conversation provided by other members of PCASC, doubtlessly brought many of them to the struggle. 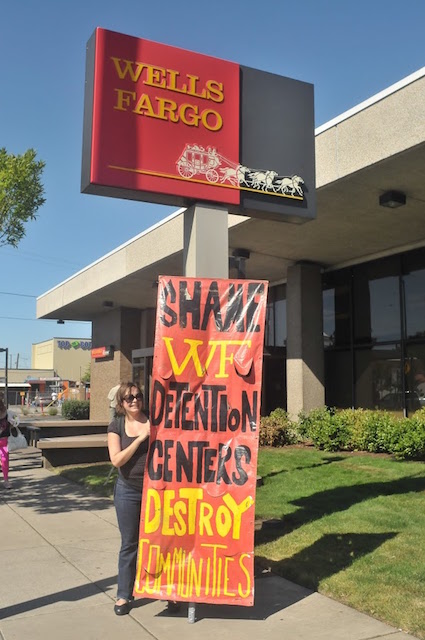 Afterward, the organizing continued, often unseen, but always being done. That is how justice is gained and advanced.

Since November’s election, people opposed to Trump have been engaging in various forms of resistance. Many have marched in the streets, and I would guess many more are posting and sharing things on Facebook declaring their opposition to the Trump Administration. In a recent op-ed, New York Times columnist Charles Blow recommended people keep yelling from the rooftops, and commentator Keith Olbermann suggested people begin resisting by “always mentioning Moscow, Popular Vote; by NEVER calling this puppet ‘president.’”

These are starting points, and if doing them is at the breaking point of your gumption, they are good starting points. But they are not organizing, even if passable as educating and agitating.

Much of this, as well as some organizing, is focused on returning the Democratic Party to power. This strikes me as largely a waste of time, particularly as many in the Democratic Party have already said they are willing to work with Trump–give him a chance. Some even hope he succeeds. Why would anyone who is putatively part of the opposition party want to work with, much less hope for success for, a person like Trump, whose white supremacist rhetoric has fanned hateful flames that have resulted in, according to the Southern Poverty Law Center (SPLC), 867 “hate incidents”? And as the SPLC’s report noted, the documented incidents “almost certainly represent a small fraction of the actual number of election-related hate incidents.”

Trump had his chance while campaigning, and considering the values he espoused and continues to be wedded to, we should not simply hope for his failure, but work for it.

But we must also work for our success, a truism no matter which party holds power. The result of that work was on display Wednesday when the City Council made its decision. That decision is not quite the one prison abolition and reform advocates were looking for. It is, as Haile said during their testimony, “like putting a band-aid on herpes.” But nonetheless it is, like all steps forward, a huge step, forcing our local government to recognize a problem and craft, however temporary and tepid, a solution. How much further will the City Council go? That’s up to us.

Some think a Hillary Clinton presidency offered manna, milk, and honey, on this issue. However she has long supported the “get tough on crime” policies which target people of color and have gone hand in hand with the expansion of the private prison industry, and during her recent campaign, she received hundreds of thousands of dollars from “bundlers” connected to the private prison industry.

As with so many issues related to the economy, the Democrats and Republicans are nearly in lockstep when it comes to capitalism, and this clearly includes the private prison industry and its attendant racism. The difference is that where Republicans use an iron fist, Democrats tend to put a silk glove over it. Trump speaks the language of white supremacy–he began his campaign by referring to all Mexicans as rapists, and while Democrats tend to eschew the language, they support policies, such as various crime bills, that further institutionalize racism and have aided the development of the private prison industry. Institutional forms of racism, supported by both Democrats and Republicans, are far more harmful than words.

I voted for Hillary Clinton, by the way. She was the lesser of two evils. But it was a choice not worth spending more than a couple of minutes making, particularly when it seems once Democrats elect their leaders, they do a terrible job holding them accountable for their actions. Under President Obama, we have seen increases in deportations of people without documentation that have torn apart families; we have seen extrajudicial executions using drones, no end to wars, and wealth gained during the economic “recovery” funneled to the already wealthy, just to name a couple of items about which Democrats have been pretty quiet. 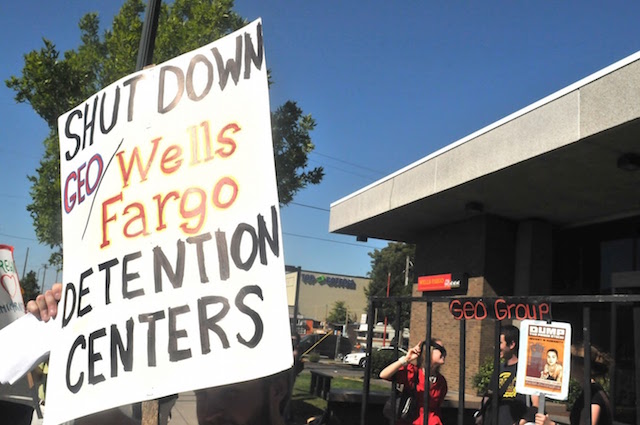 Years ago I saw a short film about Harry Bridges, the founder of the International Longshore and Warehouse Union (ILWU). In it, he was asked how we could get single payer health insurance and universal healthcare. He said the answer was simple: organize people so they don’t show up to work, and by the end of the week–as companies see a future of seriously diminished profits, not to mention as all power brokers see an organized opposition–you will win.

Obviously, it’s not so easy. People do not simply wake up one day and say, “I’m not going to work until we get what we want.” Nor did the Portland City Commissioners decide on a whim to vote for this temporary freeze on purchasing corporate bonds. They were brought to this vote by the Portland Prison Divestment Coalition and its numerous supporters.

“How did we win?” Enlace’s Trinkle asked rhetorically.  “We built a powerful, diverse coalition representing 10,000 Portlanders from the immigrant, Black, labor, faith, civil rights, LGBTQ communities. We developed leadership of the people most impacted by corporate and state violence, and built a movement that included #NoDAPL and the movement to End the Israeli Occupation of Palestine. We demanded the city act at every step–from creating a Socially Responsible Investments Committee to educating the City Council on how investments in Wells Fargo lead to increased incarceration of immigrants at GEO Group’s Tacoma facility. We made it impossible for the city to ignore their participation in the root causes of criminalization of people of color and immigrants.”

Your best way to fight Trump and all that he stands for is to organize with some group working to achieve some end you wish to see achieved. Be part of a movement that forces politicians to bend to your will. And keep at it.

As I have said in prior pieces–and as numerous people far wiser than I have said–your problem is choosing which group or groups to join. The victories will probably not come fast enough, but they will come. And when they do you will feel the co-mingling exhilarations of rejoicing in winning with comrades and friends and looking forward to the next steps in the fight.

For a listing of just some of the many groups fighting for liberation and a more just world, go to: https://www.facebook.com/pluginpdx/