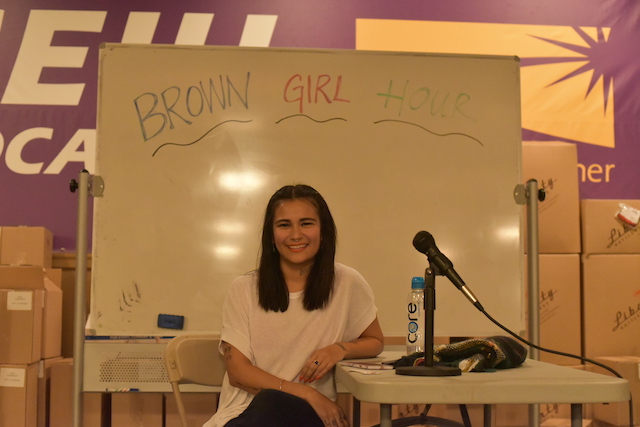 “You need to stop pretending you’re not a storyteller.”

With that friendly admonition, author Prisca Dorca Mojica Rodriguez began an evening sponsored by the Momentum Alliance that served as a reminder that all people–particularly Latinas–have their own stories. It was also a plea for them to tell those stories because if they don’t, someone else will tell their stories for them. In the shadow of a Trump Administration whose story centers on a United States that has lost its way–lost its greatness as Trump would have it–because it is no longer the sole province of white men, stories that challenge white supremacy are now more important than ever.

Humorous, poignant, witty, and sad, Mojica Rodriguez, who describes herself as a chonga Mujerista, weaves a tale of a life in two parts. Until she was 22, she had never met a white person. Born in Managua, Nicaragua, Mojica Rodriguez came with her family to Miami, Florida when she was seven years old. She was raised in a devoutly Christian family and taught to be a “proper buena.”

That all changed when at age 26 she began attending a graduate program at Vanderbilt University’s Divinity School in Nashville, Tennessee. For the first time in her life she was surrounded by white people and met barriers that incessantly reminded her that she was not welcome in that world of whiteness, save as a servant. As Mojica Rodriguez describes it, she constantly got “cues about being dumb or bad.” A fellow student who could not believe she was enrolled at Vanderbilt asked to see her identification card. Other students implied or stated they feared her being violent.

And while academia offered opportunities for her to ask questions and gather tools to find her own answers, she also found the academic world devoted to the preservation and projection of whiteness. This was most apparent to her in stories and storytelling.

“Storytelling has been gentrified,” she told the crowd of over 120 people who gathered to listen to her at the SEIU Local 49 union hall. Her world, both as she saw it and as she wrote it, was not valid at Vanderbilt, and her methods of telling her stories–relying on her observations and feelings which could not necessarily be backed up with data–were not privileged. Her professors told her to grind it out, earn her degree, and get tenure. Then, they said, she could pursue her truth.

Mojica Rodriguez saw this as a dead end, one that asked her to disassociate from her past in the pursuit of “success.” She saw that spending so much time within the system and adapting to its ways inevitably resulted in a transformation that robbed people of their unique voices in order to service the institution.

She completed the requirements for her degree, but along the way she used her education to guide her storytelling, which she regards as a form of preaching. Her stories, Mojica Rodriguez said, violate the norms of academic writing.

“I had to intentionally reclaim my way of storytelling,” she said. She had been by instructors that she did not know how to write, so it was a bold step to decide that only she could tell her stories, and that she would tell them in the manner that conveyed them best.

Writing about the self is not for the meek. Foibles, struggles, embarrassments, sins, and perhaps most glaring of all, vulnerabilities, are put to page in a strange naked glory for all to see.

“These are first person narratives,” she told the audience. “These are my experiences. And that has to be upheld.” 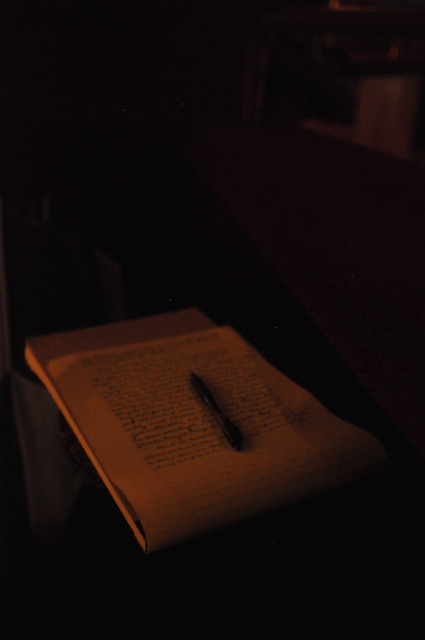 Mojica Rodriguez then read some of her work.  Her reading would have been interesting on its own, but it was enhanced by her prefaces and her interjection of stories within stories. For example, scattered about her reading of “My Papi and Mami Do Not Get Me,” she added more detail and color to the primary event of the story–a bicycle crash–that gave her mother’s love and commitment to her greater depth, consequently deepening the impact of Mojica Rodriguez’s subsequent disappointment. Those contradictions, a tempest within her, lead to a form of acceptance that refuses to remain static, always looking for something greater, while learning to live with what, for now, is. Despite being her parents’ worst nightmare–her parents who in their “hyper religious household…controlled everything we consumed, watched, and listened to; if it did not elevate el nombre de Jesus, it was considered garbage,”–and sometimes willing to “give anything for their approval and their support,” Mojica Rodriguez recognizes that at least they love her.

“And at least for now I have to be okay with that.”

Her extemporaneous transitions flowed so fluidly with what she had committed to paper that she gave off the aura of a jazz musician, adding pieces of new knowledge here and there that reworked the material so that it was both old and new. It was always of the moment, and she is always a seeker, someone constantly struggling to define herself and the world she knows, encouraging others to take up that same search.

In “The Politics of Pigmentation,” she describes how the color of her skin defined her in the eyes of others. In her childhood, dark skin was the enemy. It was a sign of being poor, that you worked out in the sun, perhaps harvesting food. Mojica Rodriguez’s mother insisted she always apply sunscreen and not go too often to the beach, and urged her to not let her skin–to let her self–“be too brown.” Not so easy a task when you have inherited your father’s genes for dark skin.

In herself she finds an intersection of struggles due to “my papi’s darkness and my mami’s gender.” But for Mojica Rodriguez “avoiding the sun feels unnatural and distasteful, knowing full well that the politics of pigmentation have been telling my people that being brown is bad, and getting browner is your own damn fault.”

She chooses not just to struggle, but to reclaim:

But I cannot undo the fact that my skin absorbs the sun rays like magic.

My skin turns that vitamin D into nutrients, and it makes my skin glow.

You ask me what color my skin tone is and I will tell you: it is Mayan

I do not burn with the sun; I evolve right before your very eyes. My

and in the summer it darkens. I have to change my makeup with the

seasons to match my skin tone, because my skin is supernatural.

I love my brown skin, but it has taken years to realize that and to undo

Four times we are told of her mother’s careful reminders that Mojica Rodriguez protect her skin from its natural caliginosity. While she still goes to the beach far too often for her mother’s taste, wearing “my tiniest bikini,” she does put on sunblock. Not to keep her skin from browning, but “to protect this beautiful brown skin I have been blessed with, and watch magic happen.”

Perhaps there is magic in the transformation of her skin, although if so, it literally and figuratively contains darkness. Mojica Rodriguez stated in one of her asides that the darker her skin becomes, the more prejudice she experiences. As she notes, although while growing up she was taught that whiteness was better, she had no one to teach her about white supremacy. That was something she had to learn, both to name it and to rise up against it.

The real magic lies in the transformation and illumination of the mind as it wrestles with the contradictions of her life, to which Mojica Rodriguez’s stories bear evolving witness. And because she has published them despite being told in a multitude of ways that they were not worthy of publication, those stories are not just about her struggle to break free from the “internalized self-hatred” of brownness, but are also a call to all others to pursue their freedom and write their own stories for all the world to see.

As she notes in her meditative “Dear Woke Brown Girl,” “Once you’ve heard your chains rattle, you cannot unhear them.”

Prisca Dorcas Mojica Rodriguez’s work can be found on her Facebook page at: https://www.facebook.com/PriscaDorcasMojicaRodriguez as well as at the Huffington Post at: http://www.huffingtonpost.com/author/prisca-dorcas-mojica-rodriguez

For more information about the work of the Momentum Alliance, go to: https://www.momentumalliance.org