Over 100 members and supporters of the Burgerville Workers Union (BVWU) came out on Wednesday January 25 to stand for worker justice at the Convention Center Burgerville on NE Martin Luther King, Jr. Boulevard. The BVWU’s most recent action occurred nearly a week after fellow worker and union leader Jordan was arrested in the Vancouver Plaza Burgerville while protesting what the union describes as his “illegal firing” for putatively stealing a bagel while working at that location.

“We’re here to show Burgerville that they’re not going to intimidate us, and we’re not gonna back down,” Jordan told the crowd.

According to Jordan, while taking his break on January 5, his manager made him a bagel with cream cheese, but neglected to charge him for it. Instead of informing Jordan of the error, the store’s managers reported him to Burgerville’s human resources department. The following day, after his general manager asked him “to explain the bagel incident,” Jordan was suspended without pay for violating company policy, even as he offered to retroactively pay for the 70 cent bagel.

It took a week for human resources to interview him. “The entire time,” said Jordan, “they were condescending, not understanding, and basically tried to threaten me because I had taken a bagel and accidentally not paid for it.”

One of Jordan’s coworkers who witnessed the entire incident was also interviewed but apparently her words were ignored.

After 13 days awaiting the outcome of Burgerville’s investigation, Jordan was informed that he was fired, though the manager who gave him the bagel–also without paying for it–received no disciplinary action. 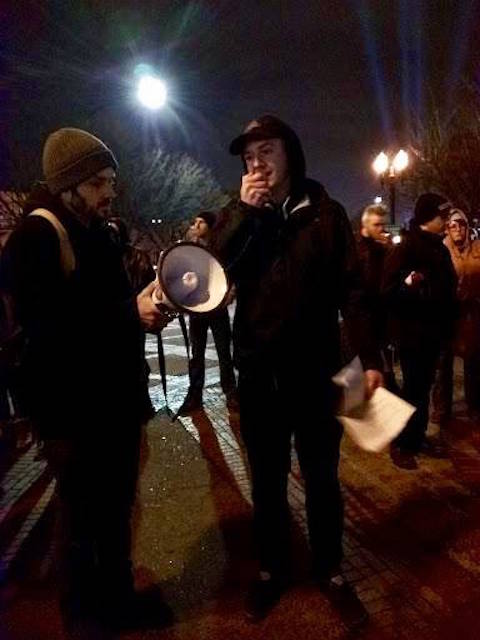 Jordan, right, speaks to the BWVU and its supporters. Photo by Chris Ferlazzo

Jordan joins a growing list of BWVU members who have felt the wrath of Burgerville’s corporate management in its attempt to bust the union. In December, Robert, who works at the SE Powell and 25th Burgerville, was suspended for several days without pay for “voicing his opinion about how best to prepare for the lunch rush” by a manager who according to the BVWU has in the past stated that she wants to “clean house.” Another incident saw Brandon, a worker and Union member at the SE Powell and 92nd store, being pressured by his manager to complete his shift despite the fact that he was in pain and ill to the point of vomiting.

Backed by community support, the BWVU was able to defend Robert who returned to work and received back pay for the time Burgerville management forced him to take off. In Brandon’s case, he and his fellow workers contacted fellow union members from other stores. The union called Brandon’s manager and got him to let Brandon go home, allowing him to rest and, more importantly, to protect customers from contagion. Such events show the importance of a union, and now the BWVU and its supporters are fighting for Jordan.

The day following Jordan’s suspension, the BWVU filed an Unfair Labor Practice charge with the National Labor Relations Board. It is difficult to see how that charge will be taken seriously considering the Trump Administration’s anti-worker agenda, but it may be beside the point. The BWVU, organized by the Industrial Workers of the World (IWW), has been gathering support and solidarity, with each action seemingly adding to its base of backers concerned that Burgerville does not respect and value its workers.

The BWVU was formed in April of last year. Among the BVWU’s demands that have been rebuffed and for which the union believes its members–including Jordan–have been retaliated against, are a $5 raise for all hourly Burgerville workers; affordable, quality healthcare; and a safe and healthy work environment.

Burgerville currently has 47 locations in Oregon and Washington, and in 2010 it made approximately $75 million dollars in revenue. The company has established a niche in the fast food world by portraying itself as a responsible and progressive business through adopting practices such as using locally grown food, powering its stores with wind energy, and composting food waste. However, when it comes to how it treats its workers, Burgerville seems little different than McDonald’s, Burger King, or Wendy’s. According to the union, a typical Burgerville crew member makes between $11 and $12.05 an hour, no matter how long she has worked there. Particularly in Portland with its exorbitant rents, it is difficult for workers to make ends meet.

On its Facebook page, the BWVU states, “Over the past few weeks we have seen Burgerville escalate their war against the union.” But if the company has escalated its war, the union has escalated its resistance and resolve. The Burgerville workers have been aided by numerous other unions and organizations including the International Longshore and Warehouse Union (ILWU), the International Brotherhood of Electrical Workers (IBEW), the United Brotherhood of Carpenters (UBC), the Theatrical State Employees Union (IATSE), the Portland Solidarity Network, the Portland Democratic Socialists, and the Working Families Party. 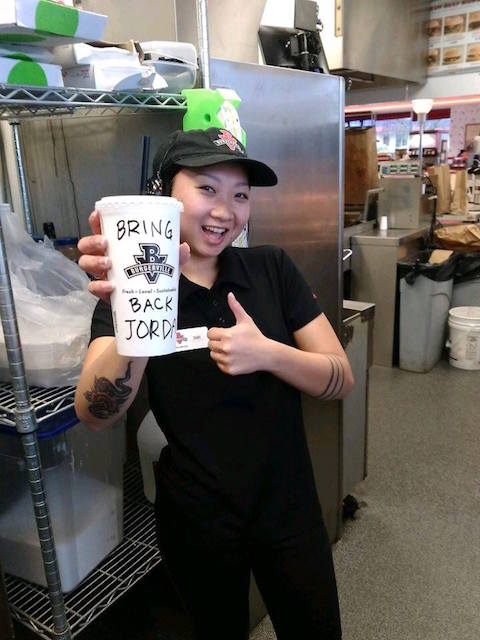 Photo by the Burgerville Workers Union

The Trailblazers had a home game Wednesday night, and one would expect a bustling business in the store, but only a couple of people crossed the picket line to eat there. When the BWVU and its supporters marched up Martin Luther King, Jr. Boulevard from the convention center at 6:40, there were 15 people eating in the store. By 7:25 that number had dwindled to two, and at 7:40 the ten employees in the store were busy cleaning and prepping, but nobody was ordering food.

Meanwhile, the Carpenters had set up a grill to serve their own burgers, as they have at prior BWVU events. Earlier in the day, Burgerville had called the health department, demanding it make sure the union grill was up to code. By the time of the picket, it was. Behind the union cooks was a banner reading, “When we fight as one, the fight is done.” At times the queue–which included both would-be Burgerville customers as well as those people who had come out to support the picket–was eight people deep. The sight of a near-empty Burgerville store with many people outside of it eating union made hamburgers was odd. Two people who were planning to enter the store, upon finding out why there was a picket line and seeing people eating the Carpenters’ burgers, happily headed toward the union grill.

Over the course of the 90 minute action, the crowd grew. Chants such as, “One, two, three, four–we won’t take it anymore! Five, six, seven, eight–we won’t stand for Bagelgate!” grew louder as more people joined in.

The event was not without incident. Burgerville called the police, resulting in the arrival of two officers who made a feeble and unsuccessful attempt to break the legal picket line. The police instead were reduced to suggesting the union move the inflatable rat that was situated near the drive-thru exit which could have presented an obstacle to cars being able to see traffic on Martin Luther King, Jr. Boulevard while exiting the drive-thru. As no cars entered the drive thru during the picket, the rat move proved toothless.

BVWU members identified private security police to film the picket in an attempt to intimidate them, but as public support for BVWU grows, it seems that it is Burgerville that stands to further tarnish its reputation, as well as risk loss of business.

“Burgerville’s true colors are showing,” said Luis Brennan of the BVWU. “Hiring goons, calling the health department on us, and arresting Jordan are serious escalations of their anti-union campaign that I think should make folks question their image as a good company. But we’re not afraid. We stood up to them and pulled off an incredible picket and we won’t stop till we win.”

Want to get involved with the community working in solidarity with the Burgerville Workers Union?  Go to their Facebook page at: https://www.facebook.com/burgervilleworkersunion/