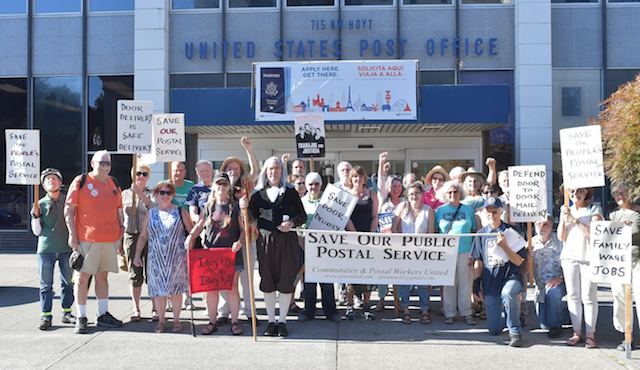 Postal workers and customers rallied on Wednesday July 26 at the Main Post Office on Northwest Hoyt Street in Portland to protest cuts in jobs at the United States Postal Service (USPS). The results of this downsizing has included reductions in service to the public, including longer lines and unanswered phone calls at retail locations, and delay of mail delivery. Overseen by Postmaster General Megan Brennan, the cuts have resulted in the loss of dozens of jobs of retail and mail processing clerks in the Portland area this year. Dozens more are targeted as part of announced cuts that would reduce staffing by 12,000 nationwide.

The USPS has long been in the crosshairs of those seeking to privatize its services. Over the past 10 years USPS has been attacked by politicians chipping away at this fundamental democratic institution. Unlike private shipping companies, the USPS has a legal obligation to serve all people in the United States, regardless of where they live.

“We are truly in the fight to preserve, save, and protect the people’s postal service,” said Daniel Cortez, Legislative Director of the American Postal Workers Union (APWU) Local 128. “Unfortunately the powers that be seek to forget that we are the Postal Service and not the post office corporation.”

USPS critics deride it for its deficits, but they are playing fast and loose with the numbers. In 2006, Congress passed and President George W. Bush signed the Postal Accountability and Enhancement Act (PAEA), which forced the Postal Service to prefund over the course of ten years future health care benefit payments to retirees for the next 75 years. Achieving that requirement has entailed the USPS setting aside about 10% of its annual budget, paying between $5.4 and $5.8 billion each year for the past ten years. As currently calculated, USPS has met only 83% of its obligations. If the same principle were applied to the private sector, most corporations would be out of business within a few hours. But that standard is unique to the Postal Service, meaning that it has had to set aside billions of dollars to pay for the health benefits of workers who have yet to be hired, or even born.

Until 1971, the Postal Service was an official part of the US government, the Post Office Department. It is now an independent government agency, and contrary to popular opinion, receives no public tax dollars. The effects on the USPS bottom line have been both stark and misleading. For example, in fiscal year 2016, the USPS posted a net loss of approximately $5.6 billion. However, due to the PAEA, it was forced to prefund $5.8 billion in future retiree health benefits. In other words, had the USPS been held to the same standard as just about every other private corporation, it would have shown a net income of about $200 million. For the past five years, the pattern is similar: apparent large losses that upon further inspection show the USPS breaking even or turning a profit when the PAEA required payment is removed.

This sleight of hand was apparent in 2011 when Ralph Nader wrote in a letter to Senator Joseph Lieberman and Congressman Darrell Issa:

The deep hole of debt that is currently facing the U.S. Postal Service

(USPS) is entirely due to the burdensome prepayments for future retiree

health care benefits imposed by Congress in the PAEA. By June 2011,

almost exactly matches the $20.95 billion the USPS made in prepayments

to the fund for future retiree health care benefits by June 2011. If the

prepayments required under PAEA were never enacted into law, the USPS

would not have a net deficiency of nearly $20 billion, but instead be in the

black by at least $1.5 billion…It is clear that these prepayments for future

manufactured ‘crisis’ precipitated by the ill-advised schedule of

prepayments for future retiree health care benefits mandated by the 2006

PAEA passed by Congress and signed by President Bush.”

The Postal Service’s would-be profits could have been used for updating the Postal Service’s buildings, vehicles, equipment, and services. Instead, the PAEA’s crafted losses have been used as a cudgel against the USPS and a constant justification for cutting its services. Some of those proposed cuts have included scaling back delivery from 6 days a week, getting rid of door-to-door delivery, and outsourcing post offices to the private Staples Office Supply chain. So far, six day delivery remains, mail is still delivered to home mailboxes, and the flirtation with Staples, which began in 2013, was discontinued earlier this year after postal workers and their allies successfully waged a nationwide “Stop Staples” campaign.

Other cuts have gone through. Since 2013, 252 of 487 mail processing plants in the US, including those in Salem and Pendleton, have been closed. Nearly half the country’s 13,000 post offices–mostly in rural areas–have had their retail hours cut from 8 hours per day to as few as two.

“Right now,” Cortez said, “we’re facing a critical time both here locally and across the country. Management is slashing jobs across the board. Just in Portland, we recently have reduced the number of window clerks significantly and management’s backwards logic is that we’re eliminating the positions of the people that provide relief to the window. So when people take well-earned leave or something, we’re not going to have people to backfill those empty slots anymore because that’s somehow going to make the offices where the vacancies occur more self-sufficient.”

Wednesday’s rally also marked Postal Heritage Day, and in celebration of the Postal Service’s 242nd birthday–it was created by the Continental Congress on July 26, 1775–a cake reading “Happy Birthday Post Office, 242 Years” was shared and enjoyed. As an added bonus, the country’s first Postmaster General, Benjamin Franklin shared some words of wisdom. Franklin, played by retired letter carrier David Medford, exhorted the crowd, “We need a revolutionary Postmaster General who will fight for the Postal Service, against the tyranny of the privatizers, against the oppression of the union busters. We need revolutionary postal workers who will spread the alarm to every corner of this nation. We need a revolutionary Congress that will fight the tyranny of the 1%, that will fight the oppression of corporate profiteers.”

In recent years, the Postal Service has experienced a decline in letter mail. However, it has emerged as the mainstay of e-commerce parcel delivery as people make more of their retail purchases online instead of at brick and mortar stores. It can also offer so much more. Email and other social media have been behind that diminished letter mail, but why couldn’t post offices across the country become places where people can access the internet? After all, most of its facilities are already connected to it.

Until 1966, post offices offered banking services. For many who live in rural and depressed urban areas, banks are not always just around the corner: 38% of zip codes have no bank. But every zip code has a post office. If its banking services were returned and revamped, and then run like its postal delivery–I can send a letter to my dad, or for that matter anybody in the country, for a paltry 48 cents–it could offer people low cost alternatives to check cashing services, payday lenders, money transfers, and automated cash machines that gouge their customers. Other countries’ postal systems offer such banking services. So can ours.

But for now, along with pushing the expansion of a postal service that continues to serve all people in the country, it is imperative to continue pushing back against the cuts that threaten to take the USPS out of the people’s hands and put it in the control of private interests. As Postmaster General Franklin said at Wednesday’s rally, “We need a Postal Service which will bind the nation together. We the people have a Constitutionally mandated post office which we must defend and revolutionize for our children and our children’s children.”

Want to get involved in strengthening your post office? Check out Portland Community and Postal Workers United’s Facebook page at: https://www.facebook.com/groups/314208358664497/. For people outside of Portland, Oregon wanting to preserve and strengthen their postal service, visit: Community and Postal Workers United Facebook page at: https://www.cpwunited.com.

Special thanks to Jamie Partridge for his help on this article.