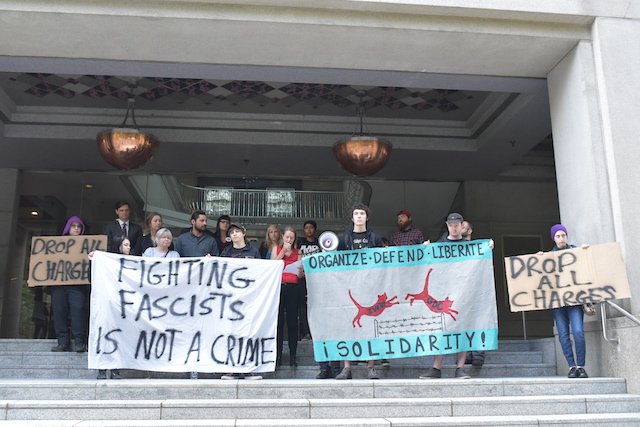 Kelly Baur and Jeremy Ibarra, who were arrested during the police crackdown on anti-fascism activists following the June 4 white supremacy rally in Terry Schrunk Plaza, both entered pleas of not guilty on August 17 to the charges brought against them. In doing so, they rejected a plea deal and demanded a trial by jury. Baur, one of 14 people arrested during the rally, has been charged with interfering with a peace officer, disorderly conduct in the second degree, and resisting arrest. Ibarra’s sole charge is second degree disorderly conduct.

The June 4 rally occurred just 9 days after Jeremy Christian verbally abused two young Black women whom he believed were Muslims on a MAX train and subsequently stabbed three men who intervened, murdering two of them. Since then, white supremacists throughout the country have found themselves even more emboldened in expressing their ideology, culminating in the horrific events in Charlottesville, Virginia two weekends ago which included a Friday night torchlight rally complete with anti-Semitic chants and Nazi salutes.

“After the racist murders in Portland in May and again in Charlottesville this Saturday,” said Baur from the steps of the Justice Center, flanked by 25 supporters, following her brief court appearance, “we need to show that white supremacy and fascist ideologies are absolutely unacceptable and should no longer be protected by the state.” 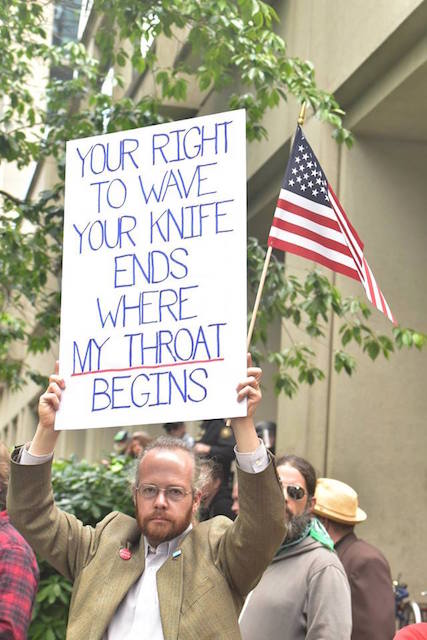 As during the June 4 rally in Portland, as well as a similar late-April white supremacist event in the Montavilla neighborhood, police in Charlottesville facilitated the white supremacists gathering together and spewing their hateful ideology. Their coddling of the fascists presented a marked contrast to the violence they have brought upon Black Lives Matter protesters and other justice activists such as seen during their assault on participants in Portland’s May Day parade where the Portland police from point one were out to intimidate participants and eventually inflicted collective punishment upon them after a few young people broke some windows and set fire to a traffic control pillar. As well, during the June 4 rally, police worked with white supremacist militia groups, one of whose members helped a police officer take down and arrest an anti-fascist protester.

“The police are not here to protect us,” said Baur. “The police exist in order to protect the state and its financial interests. Historically, and as seen by this year’s police’s biased behavior in Portland and Charlottesville, we can see the police have sided with the white supremacists and fascists.”

A member of the Portland Anarchist Black Cross (PABC) read a statement from the organization noting “the inevitable violence instigated and carried out by members of Portland’s Police Bureau and assisting law enforcement.” Part of that law enforcement, noted the PABC, includes arresting counter-protesters on trumped up charges such as those brought against Baur and Ibarra which “pressure arrestees into plea deals” that “support the narrative of events crafted by local law enforcement and city officials.”

In describing her arrest, Baur stated, “So what does justice look like in the United States? The police make an arrest. They write a report in a way that makes your arrest seem justified. They try to manipulate, humiliate, and scare you. Then you get a plea offer that is designed to push you toward pleading guilty and giving up your right to a trial, just so you can move on with your life.”

“The police,” she continued, “are never questioned about what they write in their reports. They never have to prove any of it is true. If I plead guilty, they’re off the hook. This reminds them they can get away with anything.”

The PABC added that inflated charges and plea deals serve as a “tactic of state-powers in Oregon, and in the wider US, to quickly squash resistance to oppressive forces, as well as to avoid the possible outcome that the state and its agents’ criminal behavior might be openly displayed in a public trial.”

Baur declared, “White supremacy is not about free speech. It is about oppression and power. Free speech can only truly exist between equals. If the state and their police are so clearly biased against us, how can we possibly believe that free speech is what’s really on the line here? If your speech condones or incites the violent murder of marginalized peoples, then that speech is no longer about free expression, but rather, a dangerous form of oppression.” 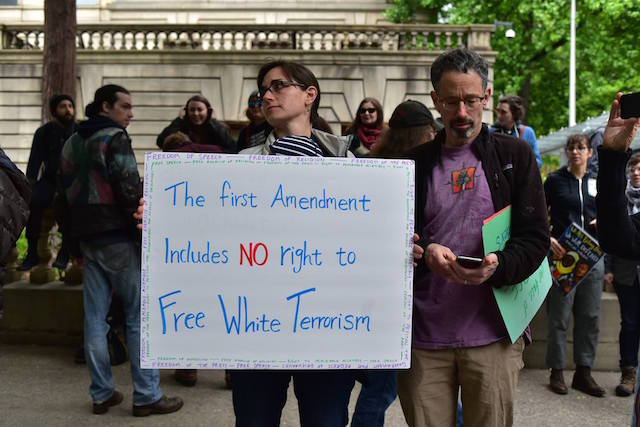 White supremacy and its accompanying racism and bigotry are clearly nothing new to the US. In fact, white supremacy is the country’s foundation. The US was built on land stolen from indigenous people and the unpaid slave labor of Africans. Republican Donald Trump’s victory in the 2016 presidential election despite his racism–he began his campaign by implying that most Mexican immigrants were rapists, and continued from there–was only the most recent iteration of white supremacy, though it is the most obvious in many generations. His statements following the events in Charlottesville should make it obvious that Trump not only supports white supremacy, but does so quite vocally.

While seeing Nazis march in the streets is certainly horrifying and must be vigorously challenged, it is the institutional forms of white supremacy, such as can be found in police departments whose role in society is to contain and control resistance, that pose a deeper threat and give power to Nazis and other white supremacist groups. Katy Kates of the Portland Industrial Workers of the World General Defense Committee noted the role police play in upholding white supremacy.

“Fascism is a deadly threat to all of us,” said Kates. “There is no escape from the demand that we confront it. Politicians and the police will not save us. We cannot vote our way to safety. As always, police aided and protected the fascists in Portland on June 4th and in Charlottesville last weekend, while permitting and assisting wholesale violence against counter-protesters. The Portland police have a long history of white supremacy, from KKK members being amongst their ranks to targeting the Black community through policies such as racial profiling and exclusionary zones. In Portland, police Captain Mark Kruger, a known Nazi, trains our police leadership. When Portlanders called for Kruger to be fired, he was disciplined and then later promoted and his discipline record wiped clean. The police will not protect or defend us. We must do it ourselves.”

Charlottesville, it appears, may be be a tipping point for many in the US, particularly white people, who have stayed on the sidelines following Donald Trump’s election, despite the drastic increase in racist and bigoted incidents and crimes that have followed his ascension to the presidency. Baur, whose trial (along with Ibarra’s) begins on September 8, noted that there was no better moment than now to get involved in organizing against white supremacy and working toward its abolition.

“It is time for white people to take responsibility for the world we live in. Do not continue to look away, and do not get used to this. Standing up to fascism is not a crime. It’s a moral obligation.”