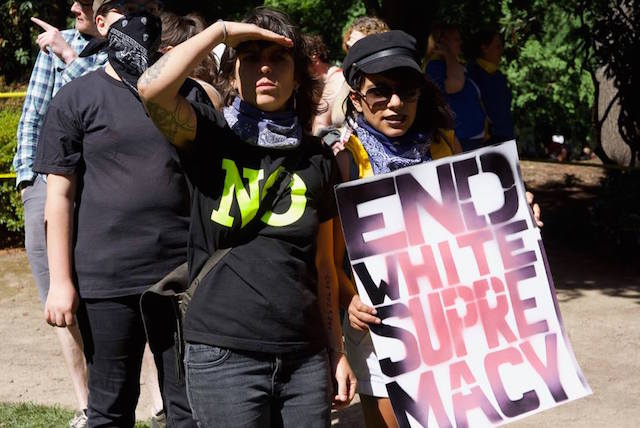 Since the white supremacy rally in Charlottesville, Virginia in mid-August that saw the murder of one anti-fascist and numerous injuries to other opponents of white supremacy, people throughout the country have stepped up at similar gatherings to tell white supremacists that they are not welcome. In Boston, thousands of people turned out in opposition to a gathering of a handful of Nazis, and a few weekends ago in San Francisco, white supremacists were apparently too scared to hold a scheduled rally. A similar pattern of white supremacist cowardice has been seen many times elsewhere, and on Sunday September 10, it was Portland’s turn.

Unlike the June 4 rally at Terry Schrunk Plaza which drew a few hundred fascists, Sunday’s gathering in Tom McCall Waterfront Park saw perhaps a dozen fascists. A few toted US flags, and some flashed Nazi salutes.

A day or so earlier, Joey Gibson, who organized both this and the June 4 rallies (as well as the recently scuttlled one in San Francisco), doubtlessly realizing he and his fellow white supremacists were going to be vastly outnumbered, effectively canceled the rally, sending just a small clutch of followers while he apparently stayed across the river in Vancouver, Washington.

Portland Police, aided by state police, cordoned off a free speech zone for the fascists, referred to by many in attendance as the petting zoo. To the south of that area was an empty space about 30 yards across, stretching nearly from Naito Parkway to the Willamette River. Like the free speech zone, it was enclosed by a series of metal fences, the same type used when blocking access to less hateful events such as one of the city’s many beer festivals.

A few hundred people gathered around the white supremacists. Raising their voices–some augmented by the re-emergence of Occupy Portland’s Disco Trike and its formidable speaker–the anti-fascists easily drowned out the white supremacists. A few of the anarchists who had gathered on the north side of the 30 yard space adjacent to the free speech zone pushed over the barricades, but they made no aggressive movement beyond. A small group of police came over and stood a few feet behind the toppled barricade. Other people joined the anarchists in yelling at the police–including one woman repeatedly asking why they were defending fascists–but outside of that, things were peaceful.

Which is not to say there was no tension. The police were armed, and not far away were the militarized police that Portland’s City Council–particularly Mayor Ted Wheeler who oversees the police bureau–apparently still has no problem deploying to events, despite their proclivity for haphazardly and brutally attacking large swathes of people.

A couple of anarchists were holding a banner reading, “You have blood on your hands, Joey,” a reference to Gibson. One of the police made a grab at it, and while the anarchists held on tight and pulled it back, the police officer set into motion the predictable angered response from other anti-fascists. Soon the police were shooting pepper spray and for the next ten or so minutes there was a confused melee. Two plastic bottles of water were thrown toward the police, one finding its mark, but between its lazy arc and the police having some body armor for protection, it is hard to believe it did much harm. Another bottle apparently struck an officer in the head with some force, leading a man who looked to be in his 60s, to ask the officer if he was alright. The officer responded by yelling at the man and threatening to soak him down with pepper spray if he did not back off. The man told him he was making sure he was okay, but the policeman continued to scream at and threaten the man.

At that point, the militarized police moved in, including one shooting what were described as either rubber bullets or pepper bullets. One person who was struck by a half-red, half-black one about a centimeter in diameter said they hurt “pretty bad.”  The sight itself, of an officer covered in armor and firing a gun into the crowd was unnerving, even terrifying.

Contrary to much popular opinion, the anarchists–the ones whom the corporate media have labeled “Antifa” and ginned up all manner of fear and disdain for–are a very well organized group. They have been at this fight against white supremacists and their police enablers for quite a few years longer than the crowds showing up in opposition to white supremacy since Donald Trump became president. Their discipline showed: they did not break ranks, holding steady in the face of police assault. 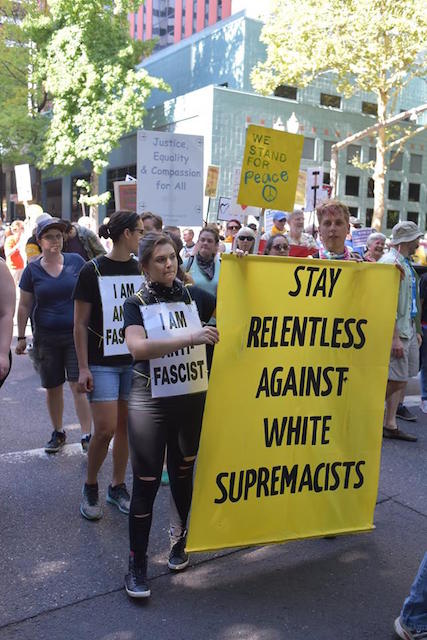 It was at that moment, suddenly lacking the police bulwark that gave them cover at previous rallies, that the cowardice of Gibson’s followers crystallized to sensibility. Luckily for them, the police soon realized their error, and in the span of about a minute, groups of bicycle and militarized police, yelling at people to get out of their way, began cycling and running up the street, seemingly desperate to defend the white supremacists.

After those police passed by, a concussion grenade went off around Salmon and 3rd. According to bystanders, police began attacking observers from the National Lawyers Guild and provided an armed escort for some of the white supremacists. They arrested seven people, none of whom were part of Gibson’s group.

Nearby, a large group of folks who had attended a rally organized by Portland Stands United Against Hate (PSUAH), were marching in the streets. Their event lacked the confrontational militarism on display at Waterfront Park, as they favor the more traditional approach to rallies of speeches, marching, and more speeches. The PSUAH event brought together a wide array of organizations, and a few thousand people who had the same essential message to white supremacists as the more militant folks down at Waterfront Park, summed up by one speaker at Schrunk as “Every time you come to Portland, you will lose.”

Indeed, Joey Gibson’s white supremacists did lose, fleeing across the Columbia River to Vancouver, where for at least a short spell they found a more welcoming crowd. At around 2:30 PM, at Schrunk, organizer Jamie Partridge announced that more people were needed in Vancouver, and soon reports were coming in that Gibson and his cowardly band had also run from that event. (Events in Vancouver later turned chilling when a man driving a truck from which “Dixie” was blaring, tried to reverse into an anti-fascist crowd. The man was detained by police and later released without charge.)

If the day in Portland was a success for people opposed to white supremacy, it also showed there is much more work to do. Malcolm X once stated, “If you are not careful, the newspapers will have you hating the people who are being oppressed and loving the people who are doing the oppressing.” Over the past few months, corporate media has been hammering home the idea that the more militant approach taken by anarchist sorts, which they label “Antifa,” (but really, if you are opposed to fascism/Naziism/white supremacy, you are Antifa) makes them as dangerous as Nazis. This should take about a half second to score as ridiculous. White supremacists want to rid the country of non-white people. Antifa wants to help protect those non-white people from the violence inherent in white supremacy. 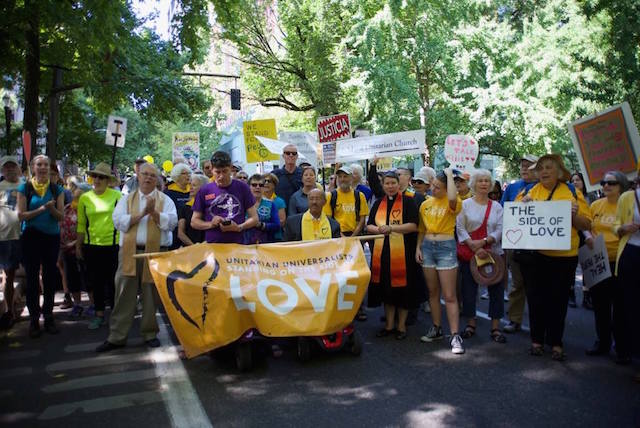 The issue, it seems, really is one of tactics. Diversity of tactics is a good thing. You don’t need to subscribe to, or even like all tactics, but organizing against white supremacy–including the police which are just one of the many institutions which buttress and enable it–should respect all of those tactics. As Cornell West noted at Charlottesville, Antifa had his and other faith group members’ backs, putting their bodies on the line when surrounded by white supremacists who West felt were clearly ready to hurt them.

Perhaps one of the most comforting examples of the breadth of the organizing on Sunday was to be found on a couple of foldout tables, first in Waterfront Park, and later outside City Hall. The Snack Bloc set up shop and laid out a nice spread of fruit, vegetables, water, sandwiches, nuts, cookies, and other items meant to placate hunger. Across the sidewalk from the tables by City Hall lay Glory, a 6 month old golden retriever who was there to provide emotional support.

There were no questions asked. If you were fighting white supremacy, you were welcome.