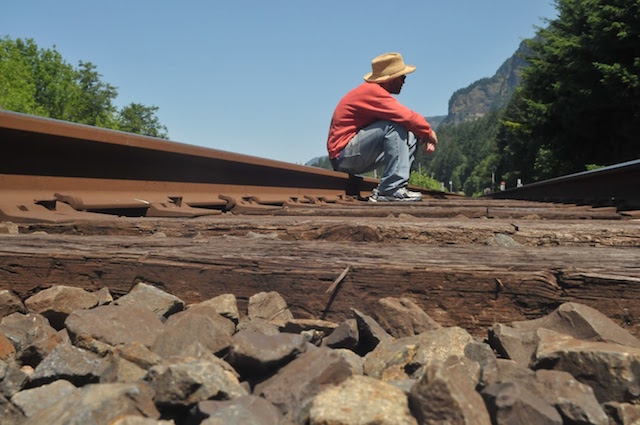 When my better 99% and I moved out here from Chicago on Labor Day weekend, 2000, the last leg was a doozy. We began somewhere around Billings, Montana. It would be a long haul. And it only got longer when our cat, Natasha, twice got loose when we stopped for rest breaks. Eighteen hours later, it was 2 AM, and we found ourselves motoring through The Dalles on Interstate 84.

I am no stranger to long drives. Eight years earlier, only a couple of months after meeting Jessica and still a few years from dating her, I drove from San Jose, California to Ithaca, New York in 47 hours. Aside from gas, I made one stop, in Iowa, for about 45 minutes. It was vital that I get that trip done as quickly as possible. It was a desperate retreat from the stone bummer that is California to the sanctuary of familiarity.

As I drove through upstate New York and its landscape that had overseen my transition to young adulthood, I began hallucinating. Colorful transparent hands were marching up and down my windshield. I could see the notes coming out of the stereo, a strange enough experience as is, but all the more so when listening to a decidedly not psychedelic item in The Kinks Are The Village Green Preservation Society, a perfect album for a time when all I could feel was deep sadness, isolation, and loss. By the time I rolled up to 209 Williams Street, I knew it and Bob Dylan’s Highway 61 Revisited–the only two items I listened to over those nearly two days–back and forth. A few days later, the Dylan cassette tape snapped. To be honest, I knew that one note for note by the time I was 15.

But this trip to the Northwest was different. That earlier excursion, much like Ulysses’s, was a return home. This was a quest for a new one, and I was doing it with my closest Friend. 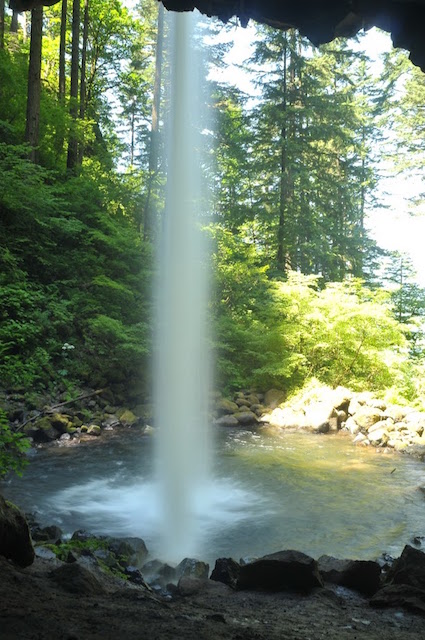 I remember around 3 AM noticing the bare landscape of the high desert, which in those early morning hours gave the impression of a flat darkness, had given way to silhouettes of the mountains and the trees of what I later learned was the Columbia River Gorge National Scenic Area. The inability to determine what was actually there combined with the anticipation of seeing it someday soon by daylight helped steel my mind to make that final stretch.

I grew up in central New Jersey, a flat area of corn, sod, and tomato fields that soon gave way to more and more housing tracts. When I thought of big hills–I knew they were not mountains–I thought of Holmdel Park, where my dad would take my brother and me sledding. Mightily it rose, seventy feet into the air, surrounded by the native maples, oaks, birches, beeches, and other trees whose leaves and barks I had memorized for a fourth grade project.

When I moved to Ithaca for college, upstate New York revealed larger hills. In the Fall they came alive with Autumnal colors. After dry summers, such as in 1988, those hills were awash with flaming oranges, yellows, and reds. It was, to use a bumper sticker phrase, gorges.

In 1998, I left that part of my life behind to live with Jessica in Chicago, a place without hills to speak of. And while the midwest’s deciduous trees still brilliantly marked the transition to Winter, a large city in Fall, even when the leaves turn, gives the effect more of a mockingly minimalist pointillism composition, a few precisely placed bright dots on a huge brown-gray canvas. But it was better than nothing, and anyways, we could easily enough flee the city and sate our appetites for the leaves’ October radiant glow.

When we moved to the Northwest, I knew I would miss those Autumn colors as well as all the feelings they brought to fore. I also knew I would see real mountains, and that the hills ringing them would be bigger than most of those I had known. Southern New Jersey is largely a giant pine forest known as the Pine Barrens, and I longed to see conifers, not on flat, sandy soil, but standing tall and dominant on those mountainsides. My imagination–the only place I had seen these sights–had set a high bar. Would reality live up to it?

When we finally saw The Gorge by the light of day, it did not disappoint. It amazed me. It thrilled me. It left me breathless. I called my folks after our first trip to it, barely able to express my sense of Wonder. It defined majestic.

Around Thanksgiving of that first year we were here, Jessica and I walked up a trail just west of Multnomah Falls. I do not remember its name, but at a guess I will say it began by Wahkeena Falls. It was a classic Northwest bastard day, much like those I knew when living in upstate New York: slate gray, rainy, and chilled. We hiked upward, the trail all to ourselves. A half hour later, after a series of clear switchbacks, we found ourselves walking in snow. I love snow. Excitedly–and obliviously–onward I strode.

Jessica, who also loves snow, but is ever the Wiser of us, was circumspect. However I, now self-christened Pete of the Northwest, insisted we keep going. Soon, the snow was so thick that we could not discern the trail. We turned around and found ourselves looking down on all those switchbacks, traversing a fairly steep mountainside, slippery with snow and ice.

Easy enough for me, but Jessica was worried about slipping and falling. Easy for me because I don’t worry about such things. As noted above, Jessica is the brains of the operation.

I got in front of her and told her to grab onto my shoulders. I would ski her down. Fun! Well, fun for me. She was not so excited at the prospect.

I figured that if we fell, I would cushion the blow for her. It was the least I could do for once again dragging her along on one of my questionable adventures. When she was ready, I began skating down. We were moving fast, but I felt largely in control. I was having good time, some of it due to the slight charge of knowing we might tumble. Jessica too was having fun, although it was tempered with the worry of falling, perhaps getting hurt badly enough that getting back to the car would be difficult or impossible. 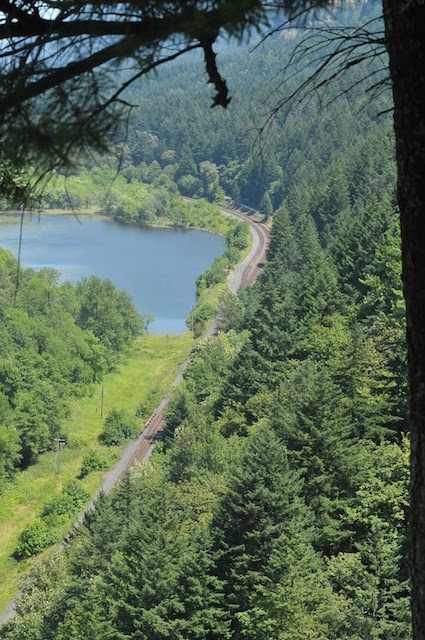 It was exhilarating, the sound of her laughter just behind my ears, both of us to different degrees outside our comfort zones, surrounded by isolated beauty. Our now lengthy tracks were covering the staccato ones we made on the way up. It was wondrous, and it was all our own.

Quickly and without incident we made it down, abounding in both excitement and joy, and admittedly, some relief.

Since then, I have had many great times in The Gorge. I have, like any good host, taken many visiting Friends there to walk. With my close Friends I have hunted mushrooms, and even when we returned empty handed, the trip was always worth the grandeur of their company and our surroundings. Sometimes I just went there on my own with no purpose beyond scratching an itch.

I will not claim that The Gorge holds the place in my consciousness that it does for others, particularly those who grew up here and knew it as their Yosemite, their Grand Canyon. It is certainly easier for me, a transplant, to ease the pain of the fire by telling myself that change is the essence of life, although at the moment this sits as an uneasy truth.

The grim reality is that while I know the Gorge was always transforming–that even when it looked the same to my eyes, it was different, even in the span of only a moment–that reality, put to words, rings hollow, like a hangover from some late night college bullshit session. The change from the fire is so extreme that I can say with sad confidence that I will never see the Columbia River Gorge again. Not the way I knew it. Not in the way it informed the prior 17 years of my life as such a clear reminder of the huge change I made when Jessica and I came here and established our Home.

Yes, I tell myself, change is the essence of life. But having it so forcefully imposed upon you, particularly when that change is so swift and so completely out of your control, is rarely fun. Thinking about that, I am borne back to Route 17, a few hours outside of Ithaca, hearing Ray Davies singing resignedly about people taking pictures of each other just to prove that they really existed.

Now with creaky knees and getting close to 50 years old, I am pretty sure that again given the choice, I would listen to Jessica and not go further up the trail into the snow. That’s fine and fair enough. When I think about that time, what stands out is Jessica’s laughter–my favorite sound of all–as we came back down, a beautiful soundtrack to the awesome quietude of the soft snow falling among those soaring pine trees lining the mountainsides I had once only known in my sleep.

But seeing the images of those fires raging, what saddens me is that I will never again have that choice.