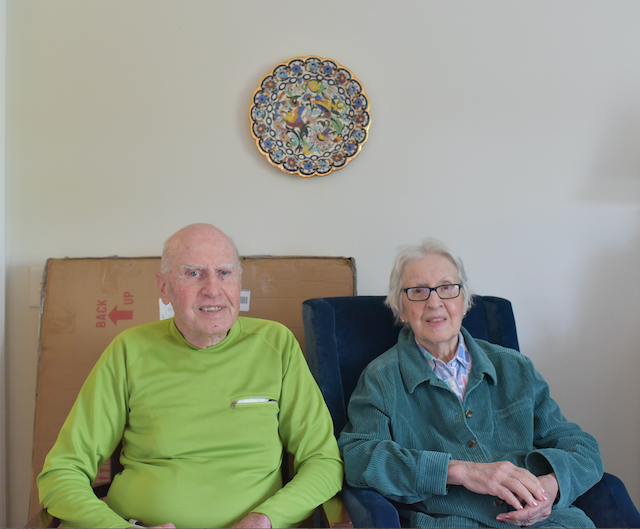 My dad and his sister, my Aunt Dorothy.  Photo by Pete Shaw.

When my mother died about 8 years ago, my Aunt Dorothy, who is also my godmother, came down from The City to New Jersey to provide Comfort and Support for her brother, my father, John.

My better 99%, Jessica, is Chinese and was raised a Buddhist. An Irish Catholic wake and funeral were, if not foreign to her, then certainly not familiar. After the afternoon waking, we grabbed a bite to eat. We was me, my father, Aunt Dorothy, my brother, my sister-in-law, my niece and nephew, and Jessica. The restaurant was some Italian place that must have also functioned as some kind of banquet hall: it was big, and we found ourselves seated around a table in a large room. We were together, perhaps wondering how we would get back up. That breaking of bread was a desperately needed moment of light, a clear reminder in the face of loss, of what still remained.

After we ate, my aunt had to grab a bus back home. She needed to get a ticket for New Jersey Transit bus line 139 which would take her to the Port Authority in Manhattan, and Jessica and I drove her to a small shopping center along Route 9 in Manalapan. One of the stores there sold bus tickets. Once upon a time there was a liquor store there. On occasion my dad would go there and pick up some beer or spirits. When I came with him, he would buy me a Tootsie Roll. There was also a fire station nearby, and I remember, sometimes, the station alarm going off, marking noon. I can still see the two jars of Tootsie Rolls, one with the midgets, and one with the longer taffy, and I don’t think I am creating memory when I write that I remember at a young age–five or six, perhaps–being excited to tell my dad I knew it was noon.

Those are good memories. They give me an instinctive warmth.

We got the ticket for Aunt Dorothy. The bus was due, but was not in sight. The stop was 50 yards south of us. My Aunt Dorothy turned to Jessica and thanked her for coming, and then–in one of those extraordinary mundane moments that if you have your senses tuned to the right frequency, are wonderfully common–told her how nice it was to share with her our traditions surrounding death, grief, and how we begin Healing. She let Jessica know she was one of us, someone with whom we had shared this terribly difficult moment, and who also was helping sow the seeds of Revival. She had taken part with us in a life and a death of someone dearly beloved and missed. And now she would Mend with us. 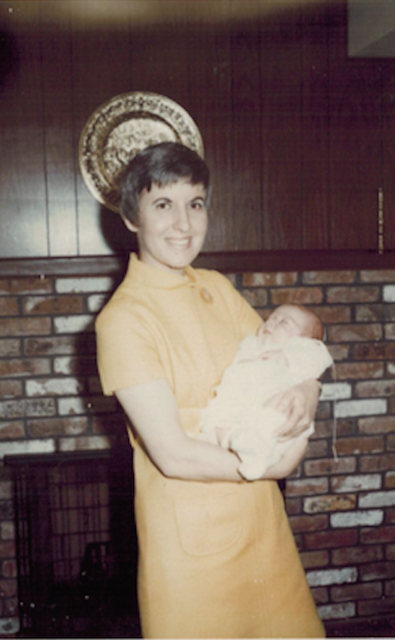 Aunt Dorothy and me.
Photo by John Shaw.

My mom deeply Loved Jessica, and she was always exuberant–abusively kind, as my Friend Jed would say–in showing it. But my Aunt Dorothy did not know that, I think; and so, perhaps she was speaking for my dad, her brother, in his grief–expressing what she knew was his Love.

She was Loving, and she was Welcoming.

And in these times when we have in many ways become as unwelcoming a society as I have ever seen in my life, it is nice recalling how Welcoming she was that day.

My Aunt Dorothy passed away this morning. I am remembering all the nice cards she would send me for my birthday. And over the past couple of years, I was able to visit her when I would go back east. By then, she was living in an assisted living facility on Long Island, coincidentally in the same town in which my brother was born. My dad–now the last of his four sisters and five brothers his parents Matilda and John brought into this world–also came, and as well my cousins Adrienne and Mary joined in for the festivities. It was pleasant, and it was nice seeing my dad and his sister spending time together.

And now I am remembering, when younger, visiting her and her and my dad’s brother, my uncle, Bernie. They lived in Queens with their and my father’s mother, my grandmother. I remember their apartment being not far from Shea Stadium. It was on the upper level of a duplex. When you entered, to your left was the kitchen, and to the right, high on the wall–high for a young kid–was a cuckoo clock. I would get so excited when the bird would emerge, it’s cuckoos marking time.  It mesmerized me.

There was a bookshelf in the main room, and the two things I remember about it were a boxed three-paperback edition of J.R.R. Tolkien’s The Lord of the Rings, plus The Hobbit, and an ostrich egg. I can still remember the couch, the single chair in which my grandma would sit, and the dining room table. And the plastic fruit on the table from which I once took a bite. Never made that mistake again. Sometimes on Christmas we would go there, along with many other Shaws–my father had quite a few brothers and sisters–before heading to my mother’s parents’ place in Brooklyn. Good memories of good times.

The last time I saw my Aunt Dorothy, on a visit to her place in Long Island, she, my father, and  my cousins Adrienne and Mary talked about life in Greenpoint, Brooklyn, where all of them were born. I think that is true, although I am not sure if Mary was born there. If not, then her accent–which she assured me, “Peetah,” is not an accent–tells me not far away.

We began up in my aunt’s room, and we finished down in the courtyard, only a short distance from the Long Island Railroad whose rumbling cars periodically interrupted us. Trains are odd. Their noise is harsh to my ears, but comforting to my spirit. It was a beautiful time, all of us taking pleasure in all of us. We talked of plain things, many of them beautiful.

I suspect I am about the last of my generation who writes letters, and when I could not partake in the pleasure of my aunt’s company, I wrote her letters and sent photos. I had been doing that for many years, and she enjoyed them. A little over three years ago, Aunt Dorothy called me on my birthday, and she told me so. And of course, wished me a Happy Birthday.

More than all those fine qualities…or, actually, in a summation of them, I think of her reaching out to Jessica to let her know that she was Welcome, and coincidentally doing it in place that held such nice memories for me when I was desperate for nice memories to remind me that the pain would pass.

But to be honest, what really sticks with me more is the bus coming toward the stop, and Aunt Dorothy taking off at top speed, fast for a woman of her 80 years, to catch it, the driver hitting the brakes and reopening the door for her. Three seconds more, and she would have missed the bus. A New Yorker to the core, keenly aware of Time and keeping it well.