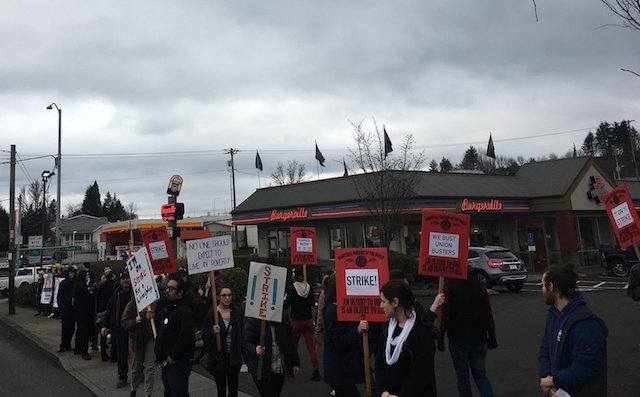 On second thought, hold the fries. In fact, hold the burgers and shakes too.

That was the message sent to Burgerville management from February 1 through 3 when workers at four Burgerville stores went on strike and called for an indefinite boycott of Burgerville. For those three days, outside Burgerville branches at the Convention Center, Southeast 26th and Powell, Southeast 92nd and Powell, and Gladstone, Burgerville Workers Union (BVWU) members walked off the job and onto picket lines that not only greatly reduced traffic in those restaurants, but also sent a message to Burgerville management that it will not be able to wish–or intimidate–away the nearly two year old union with which it has refused to negotiate. Workers on the strike lines were joined by large crowds of supporters from the numerous unions and justice, faith, and community groups with which the BVWU has fostered solidarity since its inception in April, 2016. All pledged to honor the boycott until Burgerville management negotiates with the union.

Most of the strikes, which appeared to catch management off guard, were coordinated to coincide with peak lunch hours, and as with past BVWU actions, the result was similar. Outside, large numbers of people who had been intent on eating at Burgerville were educated about how Burgerville’s management treats its workers and then grabbed their meals elsewhere. Inside, the usual midday bustle was, well, somewhere else. Chairs and booths sat empty, and the workers who were not picketing found themselves with little to do.

One of the major challenges facing the BVWU over the past two years has been breaking through Burgerville’s veneer of being a corporation that is different from other fast food companies. Its 47 restaurants use locally sourced ingredients for its products, and it recycles all packaging and customers’ leftovers. Inside the stores, signs and banners proclaim this commitment to local values, often showing photos of family farmers along with menu standards and signature seasonal items made from those close-to-home ingredients.

But when it comes to how it treats its workers, there isn’t a shoestring fry’s worth of difference between Burgerville and McDonald’s. The typical Burgerville crew member makes $11.25 an hour and works 26 hours per week. Before taxes, this comes out to about $1,200 a month. While the food at Burgerville may be local and sustainable, life on those wages is not. BWVU rallies are rife with employees who at best can barely afford an apartment in the city in which they work. Many of them live and sleep in cramped quarters, including their cars, because they cannot afford rent.

The BVWU is demanding a $5 an hour raise for all hourly employees, safer and healthier working conditions, more flexible scheduling, and greater respect from management. Workers also want Burgerville to provide affordable quality healthcare and paid maternity and paternity leave. These should not be considered exorbitant demands. After all, Burgerville’s revenue–the most recent data available shows that in 2010, when it had 39 restaurants, the company took in $75 million–is made on the backs of its workers. As Burgerville employee Ellie said in the short film that showed at the BVWU’s coming-out party in April, 2016, “I’m poor because they’re rich, and they’re rich because I’m poor.” 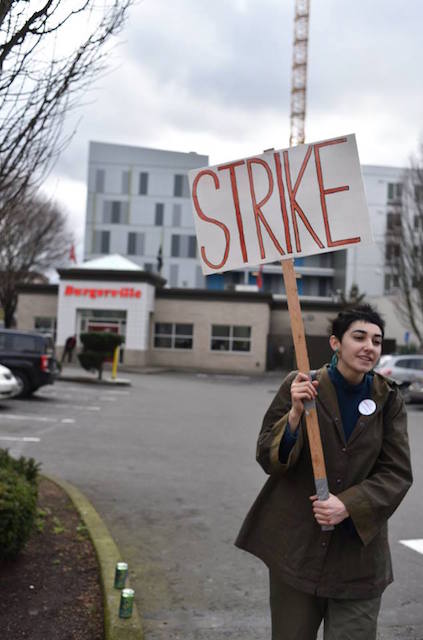 The strikes did not come out of nowhere. They had been planned for months, and they were the product of many hours of  hard work on the part of the union. Much of that labor has included reaching out to other workers and community members, and through those three days of picketing, it became clear that cracks are now appearing in Burgerville’s facade. While the BVWU and its allies may not yet have reached the critical mass necessary to bring management to the negotiating table, it certainly feels something like inevitable that soon Burgerville will have little choice as more people learn that its image is not reality.

At a rally in Holladay Park on Thursday February 1, Pastor Mark Knutson of Augustana Lutheran Church, which has been integral in the fight for immigrant rights and immigrant justice, expressed his support for Burgerville’s workers. The Portland Solidarity Network, the Portland Democratic Socialists, and the Working Families Party have all shown up in support. And the IWW, which works with the BVWU, is always present and accounted for.

The BVWU’s allies include community members who want to see the people who take their meal orders, cook their food, and keep the restaurant clean, treated with respect and decency.

There is no magic bullet here. This is all about the hard work of organizing, including reaching out to others and expanding the base of support. It takes time, and workers don’t simply call for a strike without making sure they have their ducks in row. The problem of low wages and lack of dignity on the job is not unique to Burgerville’s workers. These are social problems. And contrary to one of the founding myths of the United States, they are not solved through rugged individualism. Social problems require social solutions. That is, solving those problems requires people working together.

The BVWU has done its homework, and at least some of the results were readily apparent on the picket lines which were impressive in their efficiency. On Saturday from 11:30-1:30, 24 union members and supporters held down both traffic entrances to the restaurant parking lot. It was a soft picket, and with each car that tried to enter, one or two people would approach and explain the purpose of the picket. A large majority of those cars turned away. Likewise, pedestrian traffic was also dissuaded from crossing the picket line, and at about 12:30, when one would expect a sizable crowd filling up around the tables, only 9 people took up those spaces.

Burgerville’s management, while refusing to acknowledge the union, has not been idle in its attempts to intimidate its members. In August, 2016 Paul, from the Burgerville on Martin Luther King, Junior Boulevard was suspended and then fired because, after scalding himself and lashing out in frustration and pain, he damaged a sink. A union member at a Burgerville in Vancouver, Washington was fired for calling out one of her managers for sexual harassment. Although she later got her job back due to union and community support, she soon quit after management retaliated by making “unsubstantiated allegations and threats, putting her in a position where she felt she had no choice but to quit.”

And in probably the most infamous case of retribution by Burgerville corporate, Jordan was fired when his manager at the Vancouver Plaza Burgerville handed him a bagel, but forgot to charge 70 cents for it. Indeed, over a year after the episode, people walking the recent strike lines were still singing “He’s Got the Whole World in His Hands” with lyrics reflecting The Bagel Incident.

And Burgerville fired him 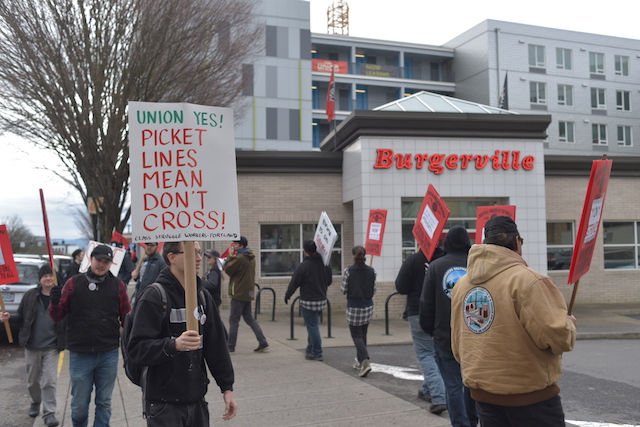 BVWU members were clearly readying themselves for some sort of retaliation. On the picket line at Southeast 92nd and Powell, one union member offered reassurance to his coworkers. “This is an issue between workers and corporate to get a contract,” he said. “If you come to work tomorrow and some manager tries to guilt trip you into staying for supporting the union, or saying what you did was terrible, they’re guilt tripping you to make poverty wages. You should have no shame to be union strong and union proud.”

It now seems clear that Burgerville is finding itself backed into a corner, forced to reckon with with its real identity, something far different from the wholesome image projected through its propaganda. People are now seeing that this fast food restaurant company’s appearance is actually a finely crafted stage piece; a mask covering up the fact that just like any other corporation, it has only one purpose: maximize profit. Wipe away the makeup, and underneath you will find just another Ronald McDonald.

An image like the one Burgerville has created is, like so many things, difficult to build and easy to destroy. If it does not negotiate with the Burgerville Workers Union, it may end up ruining that carefully crafted appearance it has long used to distinguish itself from other fast food corporations. The choice is Burgerville’s, and BVWU members expressed some confidence that management will eventually sit down with them.

“We do think that they care enough about their brand,” said one union member, “that they will come to the table rather than have all of these community organizations start recognizing and publicizing that Burgerville does not do right by its workers.”

Want to support the boycott?  Express your advocacy for the Burgerville workers at: http://www.boycottburgerville.com.

Then, call Burgerville at 1-888-827-8369 and tell them you will not spend your money at Burgerville until it negotiates with the workers and their union.

And finally, spread the word.