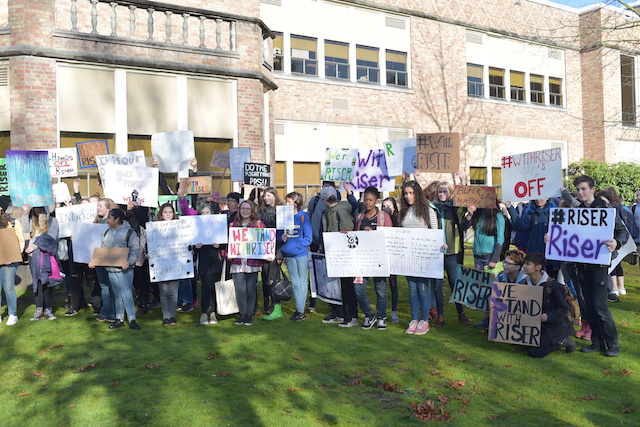 The students at Ockley Green Middle School are getting an education. Fresh off Spring break, a crowd of over 200 students and parents gathered outside Ockley Green Middle School on the morning of Monday, April 2 in support of social studies teacher Chris Riser. He was placed on leave last month for his participation in an unauthorized student walkout in memory of Quanice Hayes, the young, unarmed Black man murdered by the Portland police on February 9, 2017. The February 9, 2018 walkout was also in support of Hayes’s family. Ockley Green students, including many who do not have Riser as a classroom teacher but look up to him as a role model, carried signs and led chants in support of Riser and demanded his return to the school.

“Mr. Riser is my mock trial teacher,” said Karter, a student at Ockley Green, “and for a lot of us, he’s more than a teacher. He helps us grow and succeed, and even if you don’t have him as a teacher, he’s always willing to help you, no matter what.”

The rally in which approximately 400 students participated in February was led by Don’t Shoot PDX organizer Teressa Raiford. It followed a school assembly led by both Riser and Raiford, focusing on Hayes, and it included a march to the Portland Police Bureau’s precinct on NE Killingsworth Street. More controversially, Don’t Shoot’s event included a die-in in the middle of Martin Luther King, Junior Boulevard. Riser, who is one of the few teachers of color at Ockley Green–a school where students of color make up over 55% of the student population–was not the only staff member who took part in the event, but he is the only one who has faced discipline for his involvement. Furthermore, while Riser has been accused by the Portland Public Schools (PPS) of leading both the walkout and the die-in, students and parents dispute this.

Riser was officially placed on leave on March 23, just before Spring break. Ockley Green principal Paula McCullough and Senior Director of PPS Karl Logan sent a letter to parents and guardians of students which concluded that “students were subjected to the risk of potentially severe harm because of unauthorized actions that were not in keeping with our obligation to ensure students’ safety at all times.” While McCullough and Logan noted their support of “our students’ rights to exercise free speech, to become involved in civic events, and to engage in political and social activism,” they also stated they have “zero tolerance for our students being placed in unsafe conditions.” The rally, they wrote, “created an unacceptable level of risk to our students.” 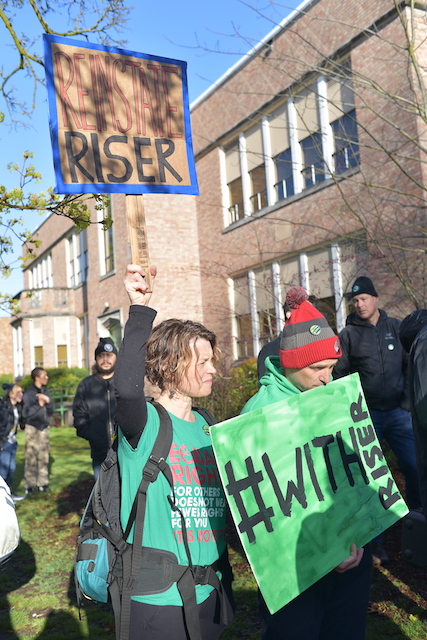 When McCullough and Logan wrote “zero tolerance,” they would have done well to have added an asterisk. PPS was quite tolerant when Lincoln High School students staged a walkout of their own in September 2016 in protest of the PPS Board of Education delaying a vote on a bond levy to help rebuild Benson, Lincoln, and Madison high schools. Many teachers marched with the students as they made their way to Pioneer Square, but unlike Riser, none of them faced discipline.

Some of the Ockley Green students who took part in the February protest, while admitting that lying down in the busy street may have been dangerous, saw Riser as an adult who was helping keep the students safe. Ockley Green student Mya, when asked why she thought PPS was punishing Riser but not the other school staff members who took part in the rally, stated, “Maybe because he was good in watching out for us and making sure we didn’t get hit by cars…He was also being a helpful person like a security guard.”

“Lying in the street was kind of unsafe,” added Karter. “But none of the students got hurt, and I think otherwise it had a really positive impact on us.”

Mya and Karter were holding similar signs. Upon them was a Mayan greeting sometimes known as In Lak’ech Ala K’in that Riser has his students say before each class. Its lines are:

Me hago dano a mi mismo

Me amo y respecto yo

The English translation is:

You are my other me

If I do harm to you

I do harm to myself

If I love and respect you

I love and respect myself

Shortly before the bell rang, signaling the beginning of the school day, the gathered students recited these lines. Soon, a couple of other students took the lead in chanting, “What does democracy look like?” with the rest of the students and parents responding to the call with, “This is what democracy looks like!”

Following PPS’s decision to place Riser on leave, some parents began circulating a petition demanding Riser’s reinstatement.  The appeal, which is being sent to McCullough, Logan, and the members of the PPS Board of Education and has been signed by over 4,200 people, states, “Chris Riser is an important presence to the students at Ockley Green Middle School. He is a strong voice for social justice, diversity and equality. At a critical time when gun violence is rampant, Chris Riser is teaching the kids that their greatest weapon is their voice.”

The petition adds, “By placing him on administrative leave, it is teaching our children that speaking up for what they believe in is wrong.”

The action also means the removal of a beloved Ockley Green teacher. “We really don’t want Mr. Riser to be fired because he’s a really good teacher and he really shows us respect,” Mya said. “He helps a lot. Mr. Riser is a very great person, and I really don’t want him to be fired because when it was my first time coming to school I didn’t know anybody, and he made me feel welcome. I was kind of scared to come here, and he made me feel welcome. When I got bullied or anything, I would always go to Mr. Riser because he is the person I feel comfortable talking to most of the time.”

In theory, our educational system is supposed to prepare students to become actively engaged citizens of a country based upon, at least hypothetically, democratic institutions. Those foundations have long been under attack, along with the public school system in the United States. Recently educators in West Virginia went on strike for better pay, and currently teachers in Oklahoma and Kentucky are doing the same. They are demanding better funding for public schools and giving their students a valuable lesson in solidarity as a tactic for addressing power structures.

In singling Riser out, McCullough, Logan, and the rest of the PPS administration are showing students something more akin to authoritarianism. Their lesson is that if you stand up for justice, you will be hammered down. Especially if you are a teacher of color.

Karter felt she and her fellow students had taken appropriate action in walking out of school in memory of Hayes and in support of his family. “I think it was worth the risk because the world needs to know that this stuff is happening,” Karter said. “I knew that it was happening, but some people didn’t. It was good for us to learn about that and go and fight for that.”

On April 3, another crowd of students and parents gathered in support of Riser, this time in front of PPS headquarters. The district had been secretive about what discipline it had planned for Riser. As it turned out, Kylie Rogers, District Chief Human Resources Officer, had recommended that Riser be fired.  But under pressure from students and parents, Rogers announced in a written statement that Riser would not be fired, stating, “I no longer believe that termination is an appropriate recommendation.” 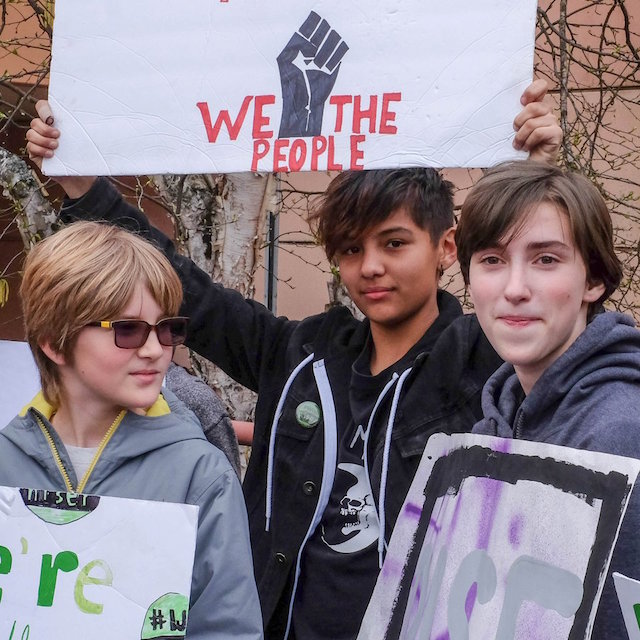 In her statement, she also wrote, “While new to PPS, I am confident that the initial investigation was thorough and appropriately scoped. However, I now recognize that we missed an important opportunity to pause and hear critical school community voices.”  While she did backtrack from her initial recommendation, it seems clear that in standing by the PPS investigation, Rogers herself is missing an important opportunity to reckon with Portland’s systemic racism.

For their part, Ockley Green students and parents, as well as their supporters, still have some work to do. Rogers’ missive did not address what discipline Riser will face, and it is fair to assume that she will push to mete out as much punishment as she feels she can, short of seeing Riser fired.

Even without Riser in his classroom, the students of Ockley Green Middle School are gaining one of the greatest lessons one can learn: when people organize and put pressure on power structures and those institutions’ caretakers, they can win. And when they understand their power, they realize that those structures are only as valid as they allow them to be.

Thanks to Jamie Partridge for his help with this article.