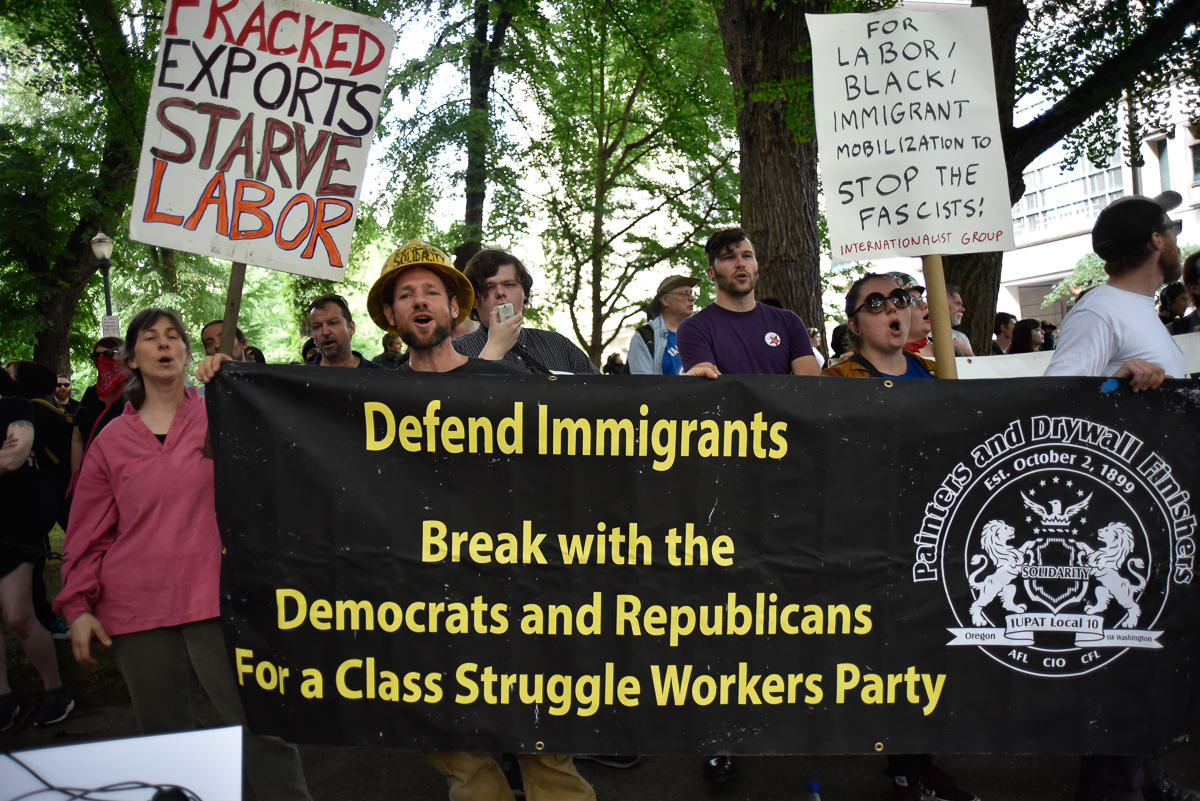 Story and photos by Bette Lee

Patriot Prayer can’t seem to get enough of Portland.  Even though the Vancouver, Washington white supremacist group led by Joey Gibson claims it hates Portland because it is a “liberal” city which coddles “pinkos, anarchists, leftists, liberals, homosexuals,” and other unsavory “anti-American” groups, its members seem hell-bent on holding their rallies and marches in Portland.  They’ve been here several times already, and their pro-Trump messages of hate, racism, and nationalism–under the banner of supposedly making the United States great again–have encountered consistently strong opposition from anti-fascist groups such as Antifa and other activists. Yet they keep coming.

So what’s up with that?  Is it their tactic to recruit more “patriots” against what they see as the “scum” that’s preventing the United States from becoming “great” again?  Or are they part of the tidal wave of the racist, violent, and nationalistic groups, unleashed and encouraged by Trump and his right wing administration?

Although there may be many theories and observations regarding the in-your-face appearances and actions of these groups, it’s a sobering realization that at this moment in history, we must also confront and protect ourselves from the likes of Patriot Prayer and other fascist groups, as well as the Trump government which also views us as the “enemy”, instead of concerned citizens with valid grievances and concerns.

The recent Freedom and Courage rally organized by Patriot Prayer took place as scheduled from 4 to 6 pm on June 29 at Terry Schrunk Plaza.  The group was well protected by Department of Homeland Security and Portland Police forces, who had erected metal fences around the park. Over 100 Antifa and other anti-fascist protestors were allowed to protest across the street, facing cops and riot cops.  Both sides hurled invectives, and, yes, neither was “civil.” This verbal exchange went on for about two hours until the rally ended.

Around 6 PM, Patriot Prayer began its march, flanked by cops and riot cops in police vans.  That’s when all hell broke loose. The anti-fascist protesters hurled eggs, plastic water bottles and fire crackers at the Patriot Prayer members and the “Proud Boys,” a white supremacist outfit designated a hate group by the Southern Poverty Law Center.  Police in riot gear rushed in to protect them, while other cops fired smoke bombs, flash-bang grenades, and pepper spray and “aerial distraction devices” at us. The right wing groups continued to march on 3rd Avenue toward downtown, again clashing with Antifa and other anti-fascist protesters several times, with both sides punching, kicking and beating one another.  The cops responded by firing more pepper-spray, flash bangs, and other similar weapons at both groups. 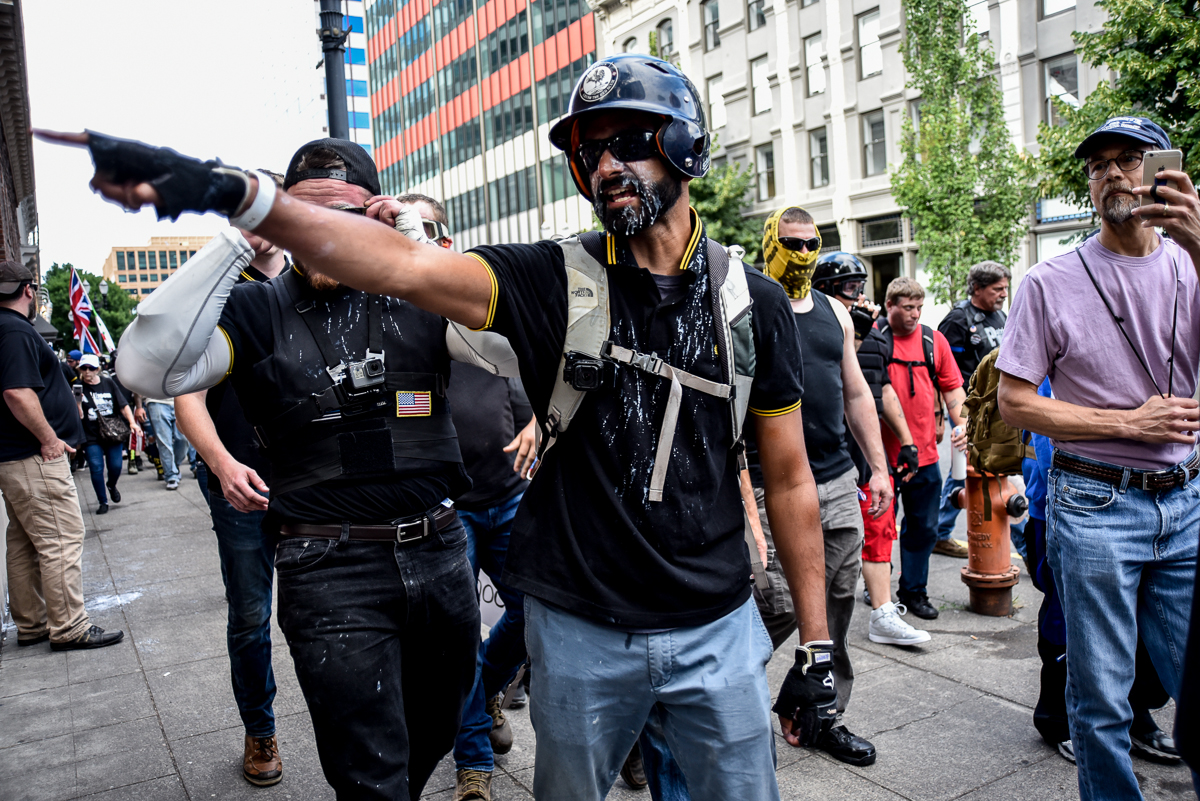 Shortly afterward, the cops declared a riot, ordering everyone to disperse or risk subjection to arrest and more police attacks. The white supremacists were escorted by the cops back to Terry Schrunk Plaza, where they continued their rally.  According to the corporate news media, they criticized the Portland police for failing to “protect” them from Antifa. Many anti-fascist protesters also re-assembled in Chapman and Lownsdale Parks, confronting the police line. They were just shouting at the fascists when the cops began shooting at them with rubber bullets.  Then the cops once again declared this was a riot, revoked Patriot Prayer’s permit, ordering them to vacate Terry Schrunk Plaza, and us to vacate Chapman and Lownsdale Parks. 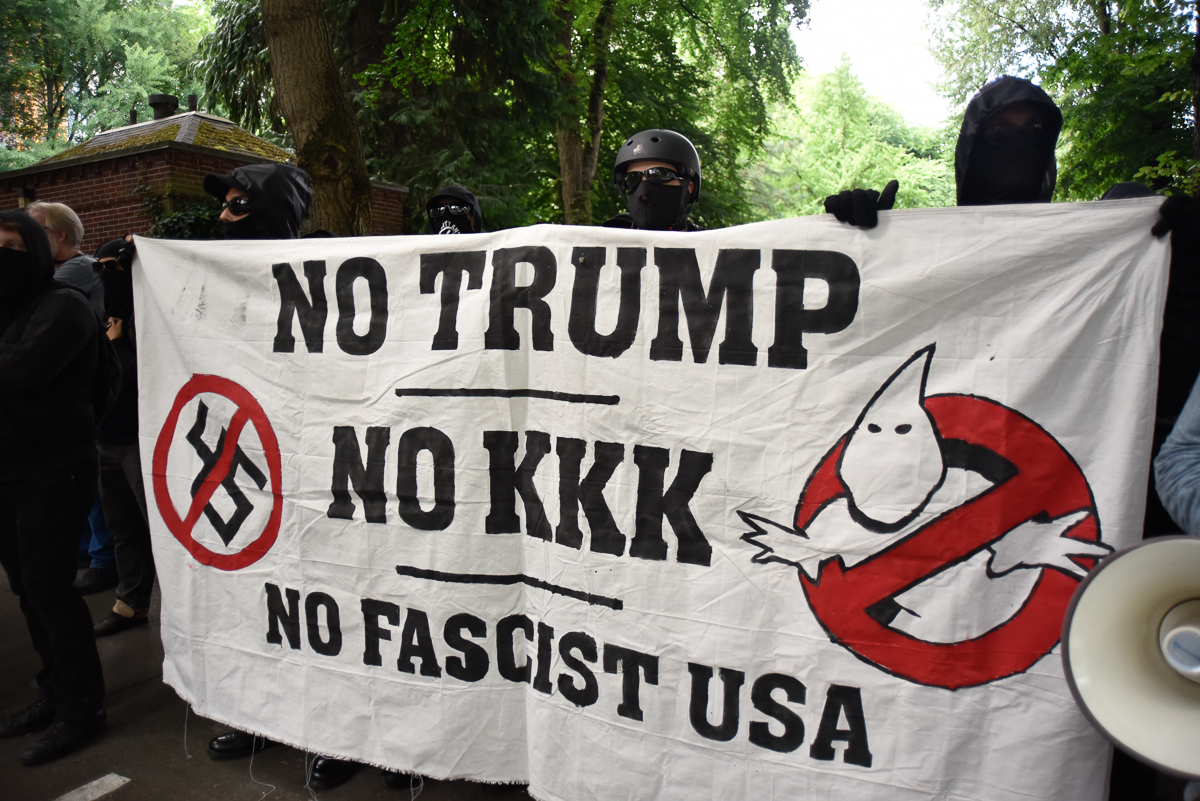 In the future, what can we do to protect ourselves and one another from these white supremacist groups?  Should we demand that they be banned from bringing their hate-filled, intimidating, and violent messages and actions to Portland, as other cities have done?  What about their claims that their odious speech is protected by the Constitution? 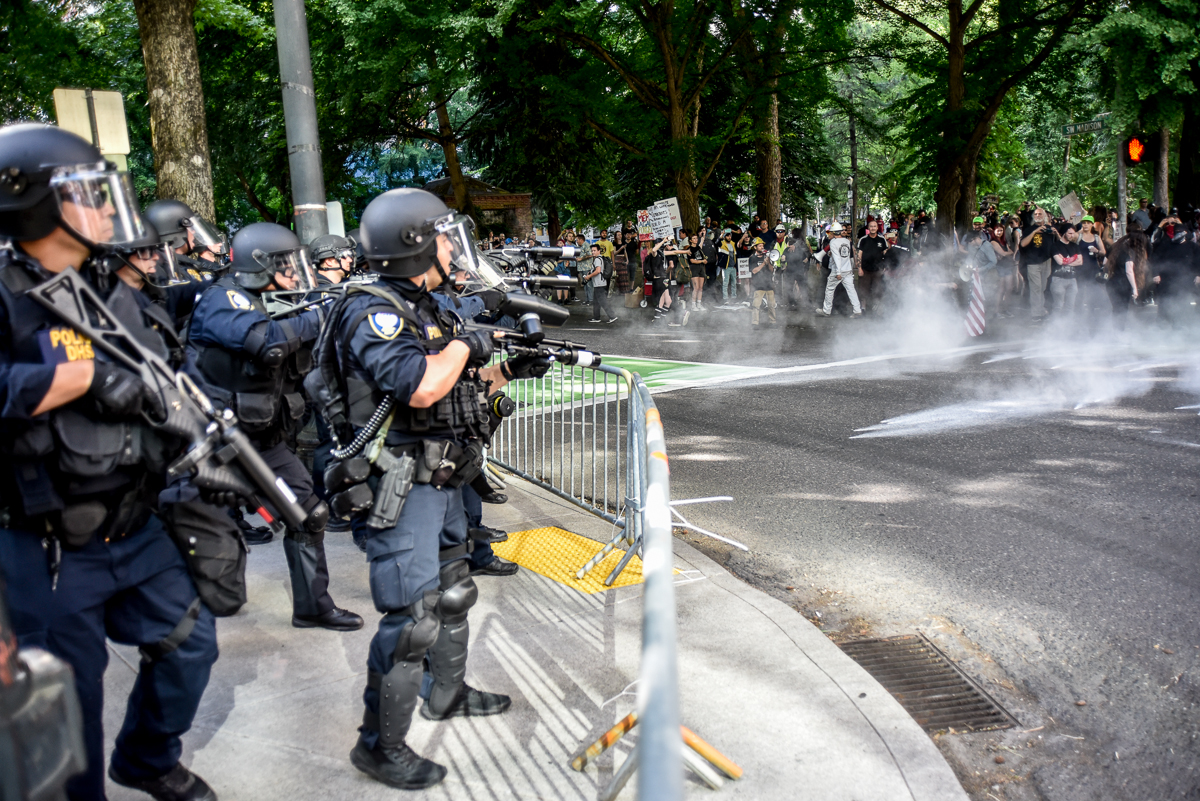 Relying upon violent confrontations seems to be an ineffective strategy, in that it tends to mirror the actions we abhor–and, more importantly, is perceived by many as equivalent to the actions of white supremacists. To that end, those of us opposed to white supremacy and its accompanying reactionary politics must work toward more effective organizing, including strategies and tactics that will undermine the appeal of white supremacy to those who feel disenfranchised and are being organized by the likes of Patriot Prayer.

The author is a longtime Occupier contributor and a dedicated photographer and activist on the front lines.