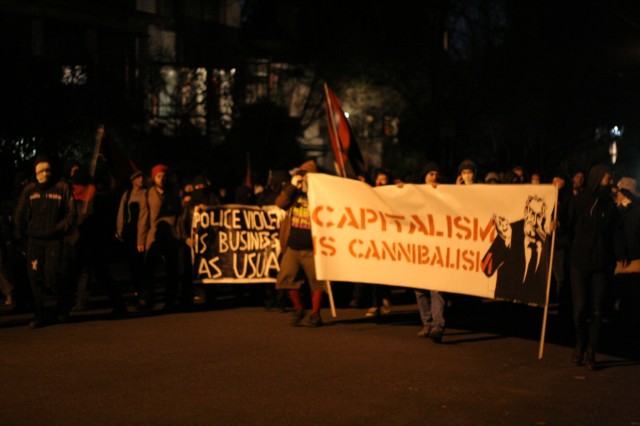 This article was originally published at Deepecomedy.

The black bloc quandary is upon us.

In true anarchist fashion (green anarchy/anarcho-primitivism, thanks. Really.) Let me first identify my terms and premises. (That’s how you spot an anarchist by the way. Arguing over terms and words. Not all who wear black are anarchists, but all who spend more than an hour splitting hairs between anarcho-syndicalism & anarcho-communism are. Anarchists can’t even begin to argue about anything unless we have two hours before the argument starts to argue about what all the symbolic words do or don’t mean. Forget bandannas, look for arguments if you want to spot an anarchist.)

1) “BlackBloc”; any autonomous cell of one or more PEOPLE for whom property destruction is on the table as a potentiality, given the right circumstances. I am well aware the term actually refers to a set of articulated “strategies”; for readability “black bloc” is used below as a catch-all for the people using the tactics rather then the tactics themselves.

2) BlackBloc cannot be purged from Occupy. This is a fact. Black bloc members ARE the 99%. And Occupy. Just the most radical edge of it. Everywhere. Tat Tvasm Asi . You could no more prevent black bloc from coming together under the Occupy banner than you could people with red hair. And you’d have a lot more success with the latter. Black bloc cells of anarchists targeting the 1% have been active world-wide for hundreds of years. Occupy is 5 months old.

The reason Occupy is the gathering du jour these days for black bloc cells is because WHEREVER there are people gathered in sufficient numbers to provide a general degree of anonymity not normally possible, black bloc will ferret out that opportunity to come together. Sporting event celebrations, marches, rallies, accidents, natural disasters, power outages, spectacles of all types have always been incubation opportunities for black bloc to form and destroy property; right now Occupy is a black bloc hotbed because it has both the large numbers to provide necessary cover AND a pool of potential participants consistently angry enough with social and/or economic injustice to swell the numbers organically in any black bloc gathering given the right circumstances. Occupy is now big enough and frequent enough to make it a lightning rod for the black bloc both now and in the foreseeable future. Just as occupiers found each other in municipal camps and grew in power and organizational ability, black bloc is using the exact same system to grow their numbers every time there’s an Occupy march or event of consequence.

In equal parts, to the delight of black bloc and the chagrin of Occupy, both groups must learn to co-exist in a reciprocal relationship of mutual benefit if this uneasy “arranged marriage” can be sustained to the benefit of occupy instead of aiding in its destruction.

Thus, my starting points are simple. “Black bloc” or “bb” refers to “people willing to destroy property and fight cops” and I submit that is unremovable from greater occupy in the near future. If you think that marginalizing the black bloc from all occupy marches until they go away is even possible, then you disagree with the second premise above and don’t need to continue reading. Alienation and ostracizing the black bloc from Occupy will simply lessen Occupy’s influence there, which is exactly what Occupy needs more of, not less. If Occupy tries to purge the black bloc from Occupy ranks, the response from black bloc will be no respect whatsoever for Occupy goals, (since they will have displayed no respect or tolerance for black bloc goals) unfocused property destruction will increase and MSM will continue to fracture occupy’s public image via the small but highly damaging unfocused rage of the now “expunged” (but still around) black bloc.

Don’t do it, young Occupy, only five short months old. Resist the urge to purge. You will not only lose your fight to remain relevant and swell your ranks, you will lose the group MOST willing to incidentally work for Occupy’s benefit in the very ways you wouldn’t personally have the stomach for.

Don’t do it. With regards to the black bloc, Occupy’s motto should be: “Don’t exorcise, organize!”

How to Occupy the Black Bloc

Obligatory disclaimer: I am 43 years old. I have kids. My bb days are long finished. Just an occupy citizen-journalist comedian now, an anarchist pundit. With a little “a”. So fuck off, pigs.

In my experience, there are two basic stations of people usually comprising a black bloc event. The “Lord of the Flies” and the “Weathermen.” “Lord of the Flies” black bloc are generally adolescent or post-adolescent youth with insufficiently developed moral ego structures to find fault with indiscriminate vandalism while “Weatherman” black bloc are usually a bit older, intelligent, community and globally oriented and almost always motivated by values and morality; people who have calculated that specific property damage and engaging in confrontations with police directly in specific situations helps stress the current system, urging collapse of inequality ever sooner. Animal liberation, destruction of machinery, sabotage of 1% buildings and symbols done anonymously… weathermen, alf, elf, ef… all black bloc cells. Can you tell me “Anonymous” doesn’t fit the description of a black bloc cell? Anonymous destroys what their victims consider “personal property” (although many anonymous don’t believe it’s “personal” at all) but takes great care to limit exclusively their direct action to perps and 1%ers, all while masking their identity. That sounds like the kind of high integrity and pointed attack that distinguishes a “Weathermen” black bloc from a “LOF” black bloc to me…

Anarcho-whatevers (including me) will wax theory and bicker for weeks for weeks about what to do post political/social/economic/patriarchal/imperialist unjust system of empire, but it only takes three seconds for us all to agree on what’s next. – TAKE IT DOWN! – NOW!

The phrase “diversity of tactics” can be bandied about freely in proper context when referring to “Weatherman” black bloc of all types and camps. “Tactic” by definition presupposes a further end, a common goal currently missing. Absent an identifiable victory by which the tactic is meant to help bring about, tactics are simply behaviors. Indiscriminately smashing windows is a behavior insofar as Occupy is concerned; one being exhibited by an enemy to Occupy at that! Crimes of selfishness against the 99% are precisely what we’re fighting against, not “strategizing” for. Diversity of tactics in right context is a nod to the needed discretion and autonomy of the “Weatherman” black block type who, while perhaps wild in tactic, remains unswervingly committed to only targeting the 1%.

This “Weatherman” black bloc archetype, MUST be recognized by Occupy, publicly or privately, but authoritatively regardless. This individual is sufficiently developed morally to target only 1% structures and symbols and thus worth the support and solidarity of Occupy, even if unspoken by necessity. (See ILWU Bosses vs. ILWU rank & file for template) Perhaps even more critically for Occupy, the “Weatherman” black bloc quite possibly might be the only conduit to the hearts, minds and behaviors of the “Lord of the Flies” black bloc to which Occupy is, for the moment, not only maligned by but inexorably linked.

You know, the ones running roughshod all over “Occupy Island.”

Penetrating the adolescent psyche is a guerrilla exercise in that it cannot be attempted head on, as any parent trying to boss their teenager around can confirm in spades. No authority will resonate with sufficient power a message of behavior modification; this is why black bloc “Weathermen” are needed. From Paul Shepard…

“The perverted adolescent has great inner pressure for senseless destruction. His moral absolution is based on felt — “gut” — reactions and the simplistic reduction of complex issues. Repetition, exaggeration, and the slogans are taken as validation of assertions, and reasonable arguments are rejection as diversion. All imperfect institutions are condemned by him to destruction and conservatives are persecuted. Revolutionary political activity is the paranoid’s haven, where one’s delusion are acted out and accepted by others as reality…
What is necessary, then, is drastic ecological revampment of our situation and a revival of the lineaments of tribal society. In defiance of mass culture, tribalism constantly resurfaces. Canadian professor Marshal McLuhan’s new “tribal man” –immersed in the group, linked by instant media instead of dead print, attuned to ecological rather than static forms–cannot be obliterated . He keeps erupting through the literary, linear, segmented culture like a wild plant that heals the inured soil. But the medium is not enough by itself. The gang or commune operating outside society cannot create from this air myths embodying real wisdom. No one can live on empty function. There must also be a content, passionately believed in, that relates man to nature, entering all human experience.”

These kids are falling all over themselves seeking proper narrative and mentor attachments, mostly unbeknown to themselves on a conscious level. Horizontally (peer/mentor level) perceived “Weatherman” black bloc are uniquely positioned to hold onto the conch shell over on Lord Of The Flies Island by supplying a hero’s journey so relentlessly demanded of their ontogeny.

You will never get bb to put the rock down, but you can show them where the bank is.

Occupy needs to bring the following tools to the table if it wish to avoid certain derailment via the Lord of the Flies wing of the black bloc: Strategery, resources and narrative.

Imagine if the mayhem on Oak street in Oakland on January 28th with the black bloc at the frontlines, chunks of cement and debris falling at the riot cops’ feet, was instead an advance group comprised of young girls with flowers, no cement to be found anywhere. (That’s how we stack it up in Portland. We’ve welled up many a pig’s eye with it too.) Black bloc non-existant, no where to be found, until the police advance on the “flower corps.” Black bloc suddenly emerges from behind or to the side, hurling cement chunks in a heroic (albeit largely symbolic) effort to engage the cops and divert them away from the march. Cops then scatter the now heroic black bloc, who’s escape and regrouping can then be aided by Occupy.

Whenever Occupy march, trusted “Weathermen” black bloc should be given 1% locations and symbols along the route in advance, de-arrest responsibilities for internal media, anti-kettling planning, scouting opportunities, diversionary “marches” and “faux occupations” ANYTHING that moves unfocused rage into congruence with Occupy principles. Walkie-talkies, pads, shields… all of these resources and more should be made available to the black bloc. By incorporating heroic narratives and INCLUDING (who doesn’t feel proprietarily about an endeavor once asked for help and advice about how to execute it?) black bloc rather then marginalizing it, Occupy can begin learning how to delicately dance with the radical energy of the black bloc and tether it to a productive end.

It is time to occupy the black bloc as we have occupied everything else in our path to date. With creativity, effective methodology, resolve and persistence.

We don’t avoid or duck our problems, we OCCUPY them until our problems become our strengths!