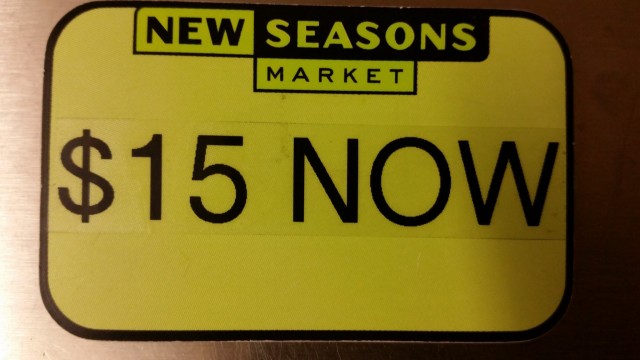 The friendliest store in town is not so friendly after all. At least not to its workers.

That was the message sent by a crowd of over 30 people outside the New Seasons on SE Hawthorne on April 21. Coming together on April 21 in support of raising Oregon’s minimum wage to $15 per hour, some New Seasons employees and 15 Now PDX painted a very different view of the store that has built a portion of its reputation and clientele on being a company that treats workers well.

New Seasons workers say they have been organizing because the store is laying off staff and replacing employees with temporary workers who make only just above the minimum wage. They also accuse New Seasons of being a low-wage employer that contributes to increased gentrification in Portland. “Every New Seasons that goes in drives up housing costs in the neighborhood surrounding the store. As New Seasons employees, we are often unable to live near the stores we work in because the rent is too high.”

Justin Norton-Kertson, an organizer for 15 Now PDX, read from a statement written by a New Seasons employee who wished to remain anonymous for fear of reprisal. “As a New Seasons employee what I most want to get across to customers and community members is that New Seasons is not the same company it once was. While the company has grown dramatically, the treatment of its labor force has not kept up. From low wages to labor cuts to erratic scheduling, felt most keenly by newer employees, New Seasons is not holding up their end of the bargain as an employer who provides sustainable and meaningful work to individuals, families and communities.”

“New Seasons presents itself as a progressive company,” said Norton-Kertson, “but unfortunately that is not the case. We want people to understand they don’t treat employees the way they say they do. They say they have employee-friendly policies, but they pay low wages and many workers are on food stamps.” 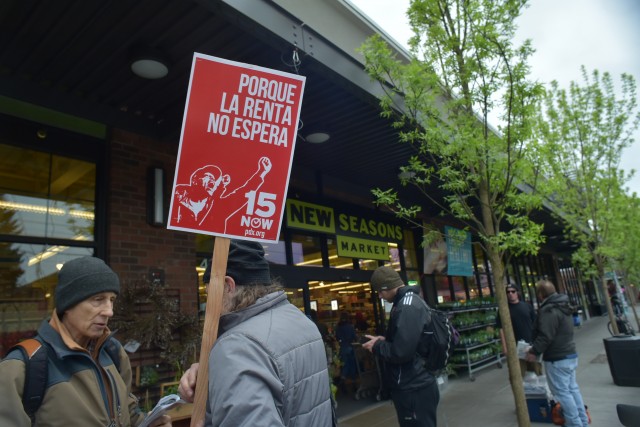 The current employee tenor represents a sea change from my local New Seasons experience some years ago. In that encounter, the cashier was eager to tell me how great it was to work there. I agreed that it sounded nice—flexible hours, health insurance even if you worked fewer than the usual hours necessary, and other perks not normally associated with grocery chains—but added that the owners of the store were vehemently anti-union. The cashier responded by telling me they did not need a union because the owners took care of them. I asked her what would happen if the owners changed their minds, or sold the company to people who did not share those values. For a moment I received a blank stare, followed by the affirmation that this would not happen.

But happen it did.

In 2009 Endeavour Capital purchased a majority share—approximately 55%–of New Seasons.

Since then, while keeping up its “friendliest store in town” image, the reality of life at New Seasons has changed. At Wednesday’s rally, workers talked about their difficulty making ends meet. Some mentioned that New Seasons takes a Wal-Mart approach to employees–ensuring that some of them work too few hours to qualify for company health insurance.

New Seasons is a B Corporation, and according to the B Corporation website this “means giving back to the community, taking care of the environment, and creating a progressive workplace where staff can thrive.” This is nice language, but as with most of the propaganda put forth by the business community, it belies reality. First and foremost, corporations exist to make profits. They may dress up that primary calling with noble goals, but those noble goals were created to carve out a market niche. The friendliest store in town has the same goal as the nastiest one– maximize profit–and both are achieved using the same tyrannical top-down model. What it means for workers to thrive depends upon the whims of the owners, not the needs and desires of the workers. 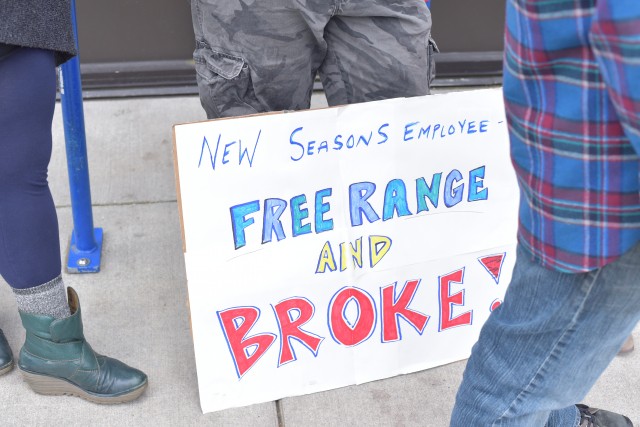 As protesters handed out fliers to passersby, quite a few New Seasons customers were shocked to find out that, as reported by the Portland Mercury’s Dirk Vanderhart, Stephen Babson, a New Seasons board director, held a $12,500 per plate dinner for Jeb Bush—who has called for getting rid of the federal minimum wage–the previous night. Once touted as a core value, worker welfare at New Seasons has devolved to a workplace where poverty wages require workers to resort to federal welfare to meet their basic needs. In terms of that dinner, according to Norton-Kertson, a plate cost “more than most New Seasons workers make in a year.”

In 2012 New Seasons fired Ryan Gaughan, accusing him of theft; a judge found him innocent. His co-workers, believing New Seasons terminated Gaughan in retaliation for his role in organizing employees for better working conditions, fought for his reinstatement to no avail.  At Tuesday’s rally, workers talked about feeling intimidated to stand up and demand New Seasons live up to its putative values, and also said they felt some of their fellow workers had been fired for trying to organize a union.

Gaughan, who now works at People’s Food Co-op, stood across the street from the rally. “It is clear people are scared about forming a union,” he said, “but at the same time they recognize the community support for raising the minimum wage and are willing to take more risks. Fighting for a $15 minimum wage at New Seasons is a good thing to fight for, but they shouldn’t lose sight that worker power and worker democracy is the goal.”

Want to get involved? Go to: www.15nowpdx.org and visit the 15 Now Facebook page at: www.facebook.com/15NowPDX?fref=ts