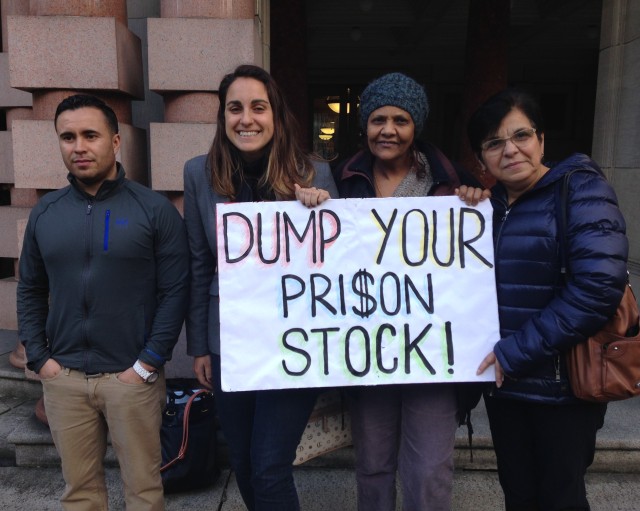 After several months of deliberation and community input,  the Socially Responsible Investments Committee (SRIC) voted unanimously to recommend that the City of Portland divest its holdings in Wells Fargo & Company due to the company’s financing of for-profit prisons and “morally bankrupt” lending practices. The City currently holds $40 million in Wells Fargo corporate bonds.

“We are thrilled that the committee made the right decision today,” said Mary Mendez of Enlace, the Portland-based organization that has led the charge of the National Private Prison Divestment Campaign. “Our Black, Latino, and immigrant communities have suffered enough from incarceration.”

The February 22 vote was the first taken by the SRIC, which was created through a 2014 City Council resolution. According to the Office of Management and Finance, the SRIC “is charged with recommending corporate issuers for inclusion on, or removal from, the City’s Corporate Securities Do-Not-Buy List in the City’s direct investment in corporate securities.”

The SRIC’s decisions are based on City Council’s list of seven “established social and values concerns as principle for consideration” that include concerns about abusive labor practices, corrupt corporate ethics and governance, and most importantly as these pertain to Wells Fargo, concerns about impacts on human rights. While it may seem obvious that Wells Fargo’s role in financing the private prison industry would place it squarely on the Do-Not-Buy list, the decision is not as simple as it sounds.

City Treasurer Jennifer Cooperman told the committee that if the City divested itself of its $40 million in holdings in Wells Fargo bonds and put that money into US treasury bonds, it would lose $1.8 to $2.3 million. Of course, the divested money could be invested in some of the City’s 55 other eligible issuers of corporate bonds (all of which will be subject to the scrutiny of the SRIC).

Or it could be invested in other more productive ways.. “When we divest from the prison industry all the way up the food chain from prisons to prison contractors to Homeland Security to the police,” said Amanda Aguilar Shank of Enlace, “we free up literally billions of dollars that can be invested into programs that reduce crime and support communities, like education, healthcare, and living wage job creation.” 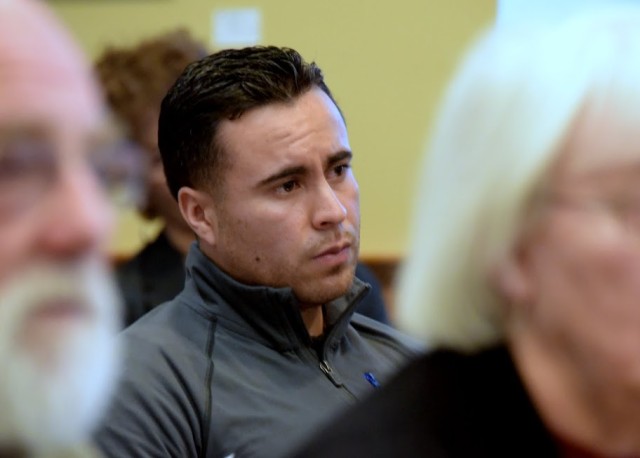 Cooperman also added that while the City’s securities in question were issued by Wells Fargo Bank, people who supported divestment were talking about Wells Fargo Asset Management, the branch of Wells Fargo that decides what stocks will make up its mutual funds, pensions, and 401(k) accounts. She described the latter as a “totally different entity” than the City-owned debt securities.“The bank per se is not purchasing equity securities,” Cooperman said.

The decision marks the first time a public body has voted for divestment from Wells Fargo due to its complicity in the private prison industry and comes eight months after a student campaign at Columbia University pushed the school to sell its shares in Corrections Corporation of America (CCA), the largest for-profit prison company in the US.

In December the University of California (UC), announced it would divest from its $25 million of holdings in CCA, The GEO Group, and G4S (G4S provides security for Portland’s City buildings, including City Hall, the Portland Building, and the Communications Center/Emergency Coordination Center). The UC decision came after pressure from student groups, in particular the Afrikan Black Coalition and the Black Student Unions on all nine UC campuses who supported a resolution demanding the UC system sell its investments in for-profit prisons.

The campaign has also moved on to the national political stage. Both Hillary Clinton and Bernie Sanders have promised to outlaw private incarceration if elected.

In testimony prior to the committee’s vote, Paulino Ruiz of Woodburn spoke about his two years in immigrant detention, including his role in organizing hunger strikes at The GEO Group owned Northwest Detention Center in Tacoma, Washington. The hunger strikes were set up in response to the abusive conditions in the prison. Ruiz said he was “retaliated against” for helping coordinate the hunger strikes and was not allowed access to an attorney and his case information.

“Just during my detention,” Ruiz told the SRIC, “prisons and investors like Wells Fargo made over $100,000 that could have been spent doing good for the community instead.” 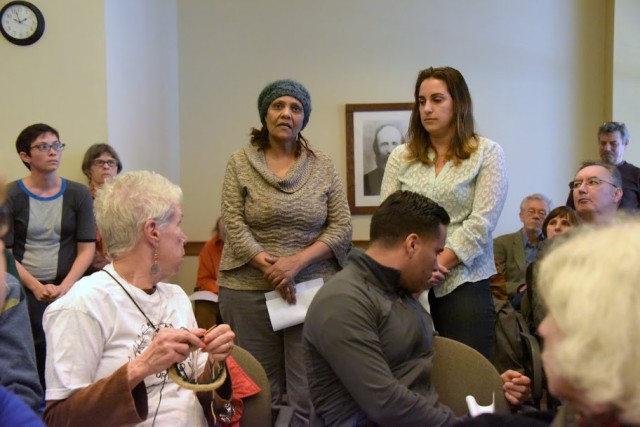 Elsa Mengis, whose son Thomas Amanuel was held in a GEO Group prison for 4 years, asking the SRIC to recommend the City of Portland divest from Wells Fargo. Amanuel was released the next day. Photo by Doug Yarrow.

Elsa Mengis, whose son Thomas Amanuel was being held at the The GEO Group’s Mesa Verde Detention Center in Bakersfield, California, implored the committee to recommend divesting from Wells Fargo. Mengis, who is from Eritrea, fled the country during its war for independence. Her son, 38, has lived in Portland for most of his life, leaving Eritrea when he was 1 year old.

While Mengis is a US citizen, due to bad legal advice she received when she first came to the US, she did not apply for her son to become a citizen. Now, according to #Not1More, “a simple theft conviction” has not allowed Amanuel to naturalize.

“The charge was a result of a plea bargain that Thomas agreed to,” said #Not1More, “even though he had no appropriate legal representation and little understanding of his options. This charge, and a DUI conviction from almost 10 years ago, are the factors ICE (Immigration and Customs Enforcement) has relied on to detain and place Thomas in deportation proceedings.”

One day after the SRIC meeting, on February 23, Amanuel was released after spending 4 years in prison. During his time there–which Kayse Jama, director of the Center for Intercultural Organizing, said was costing US taxpayers about $200,000 a year–ICE was working on deporting him to Eritrea, where he has not lived for nearly 40 years. If the idea of sending Amanuel to a place where he would not know anybody is bad enough, a United Nations Human Rights Council report found “systemic, widespread and gross human rights violations have been and are being committed in Eritrea under the authority of the Government” and that “some of these violations may constitute crimes against humanity.”

Prior to the meeting, some supporters of the City divesting from Wells Fargo were concerned about having enough votes. They need not have been concerned. Most committee members strongly opposed the City remaining invested in Wells Fargo, not just for its links to for-profit prisons, but also for its role in payday lending and illegal foreclosures. Committee member Robert Landauer said, “The private prison issue is egregious and sufficiently egregious to stand by itself,” while Sayer Jones described Wells Fargo’s business plan as “prefaced on hurting people” and the company as “morally bankrupt.” Sayer also said Wells Fargo was “an impossible company for us to make money on as a city.”

Responding to Cooperman’s statement regarding the separation of Wells Fargo bank and its asset management branch, Hyung Nam noted that even so, divesting the City’s holdings would send a clear signal to Wells Fargo that investments in private prisons were unacceptable. Nam seemed to sum up the feeling of the committee when he declared, “They’re horrible.”

“Private prison corporations are responsible for the theft of billions in taxpayer dollars, as well as the destruction of tens of thousands of lives of those caught up by prison-backed policies advancing hyper-incarceration,” said Shank. “Private prison lobbying has driven things like the drug war, which targeted Black and brown communities, as well as more recently, family detention, where immigrant mothers and children are incarcerated in prison-like detention centers. Private prisons, who earn their money on a per person, per day rate, see our bodies as vehicles to make greater profit. It is unethical as a city to profit from these practices and to use our public dollars to prop up this inhumane system.”

Monday’s victory also show the rewards reaped when people commit themselves to a long, focused struggle. For instance, in Portland the campaign began with an affinity group from the Portland Central America Solidarity Committee (PCASC) occupying the Wells Fargo branch on SW 5th Avenue during the Occupy the Banks protests on November 17, 2011. Eight people, coordinating their action with the rally, shut down the branch as the march passed by, educating hundreds of people in the process.

Soon, PCASC had partnered with other community groups, such as Enlace, as part of the national Prison Divestment Campaign working to force Wells Fargo to divest from the private prison industry. 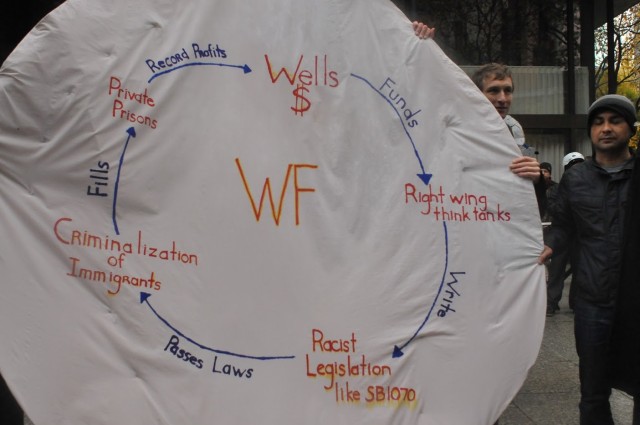 In August of 2012, over 20 people gathered outside the Wells Fargo branch on NE Martin Luther King, Jr. Boulevard to educate people about the bank’s support of the private prison industry. Six weeks earlier, after a coordinated action at eight Wells Fargo branches in Portland that resulted in the group receiving a letter from Wells Fargo’s senior legal counsel in Los Angeles, California saying PCASC was not welcome in Wells Fargo to do anything but bank.

PCASC member Jake Dacks at the time said, “We recognize that we have hit a nerve, and we are going to keep up the pressure in Portland through direct action and protests, and we will continue encouraging individuals and institutions to get their money out of Wells Fargo. There are plenty of credit unions in the Portland area that use investment to offer lower interest loans to the community. The money in credit unions is invested in the community, not in private prisons, which rip communities apart.”

The direct actions and protests rolled on, and now 4 years later the City Council will have a chance to take a stand against Wells Fargo’s support for the private prison industry.

“Today’s decision indicates that it is time to take the profit motive out of incarceration,” said Jama. “Private prison corporations and their financial backers like Wells Fargo should not be profiting from incarceration, and should not be allowed to lobby on criminal justice and immigration policy, because their motivation is to put more and more people behind bars.”

Want to get involved? Call the City Commissioners and ask them to listen to the community and add Wells Fargo to its Do-Not-Buy list.

To join the 20 faith, labor, and community organizations that make up the Portland Prison Divestment Coalition, contact Enlace at (503) 295-6466 or [email protected]