After nearly two-and-a-half years of negotiations, town halls, council meetings, and testimony, Right 2 Dream Too (R2DToo) is moving to a new home near the Tilikum Crossing. In a 4-1 vote on February 24, the City Council approved a resolution whereby the rest area for people without housing will relocate across the river to a 9,000 sq ft City-owned plot at SE Harrison and 3rd.

Though the move was opposed by many area companies and business interests, particularly East Side Plating, it comes during a City-wide housing state of emergency and the council has acknowledged the important role R2DToo plays in helping many houseless people get into housing. (This was the second attempt to provide a suitable site for R2DToo. On the verge of approving a spot under the Broadway Bridge in 2013, the City reneged in the wake of vehement–and at times ugly–pushback from Pearl District residents and developers.)

“You’ve come up with a self-help solution that deserves our respect,” Mayor Charlie Hales told R2DToo members who were in attendance. “And that’s what this is about–about respect. So thank you. Thank you Ibrahim (Mubarak, one of the founders of R2DToo) and everyone else involved for creating a valid, short-term temporary solution to a really big problem the we all need to work on.”

On February 18, the council heard 3 hours of public testimony, much of which was in opposition to R2DToo’s potential move. A scheduled vote was delayed when Commissioner Steve Novick asked for more time to discuss the issue with staff, leaving members of R2DToo understandably nervous going into Wednesday’s meeting.

The first order of business was approving a resolution confirming that R2DToo would comply with the zoning code of its new location. Commissioner Fritz spoke in tones that gave the impression she knew both resolutions would pass, as did Hales. The resolution passed 4-1, with Commissioner Nick Fish opposed.

The resolution approving R2DToo’s move took a bit more time. Commissioner Dan Saltzman introduced an amendment for the rest area to be off limits to people under 18 between 8 PM and 7 AM and that “Right 2 Dream Too shall refer all pregnant women who stay on the premises to a federally qualified health center for prenatal care.” The second portion of the amendment drew protest from Fritz who asked Saltzman, “Why would a person who lives outside have to go to a center when people who live inside can go to a private provider?” 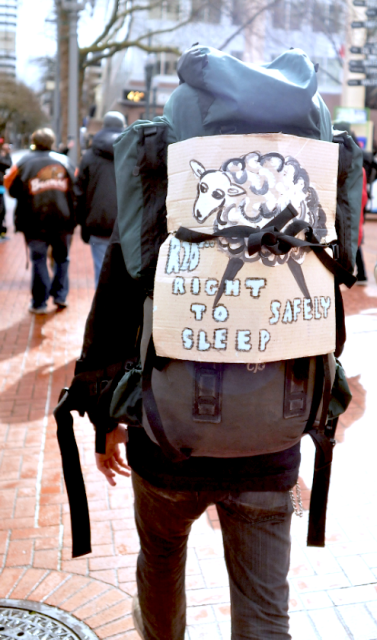 Though the amendment was later struck down, Saltzman made clear he was not letting go, saying he had been disturbed by testimony last week in which people said that pregnant women were intentionally avoiding hospitals because they are afraid of losing their children. Some people in the council chambers replied, “It’s not fear. It’s truth,” but it looks certain that Saltzman will insist upon revisiting the issue later on during the crafting of the use agreement.

Ironically, it was Saltzman who cast the deciding vote to approve R2DToo’s move, a rather surreal conclusion, as he has often been the group’s antagonist. When he oversaw the Housing Bureau, Saltzman’s actions–whether levying $25,000 in fines against it for illegal camping or publicly worrying that R2DToo was “bleeding” money away from affordable housing–often made clear he was not an R2DToo fan.

Yet not only did he vote in favor of the move–while noting that he still believes affordable housing is more desirable than “tent camps as a solution to homelessness”–he spoke of R2DToo in glowing terms. “I give a lot of respect to R2DToo in the last four or five years,” Saltzman said. “They have really proven to myself and many others who were skeptical about their ability to maintain alcohol and drug free operations; to maintain a very good environment in and around the neighborhood. They’ve proved me and other people wrong.”

“I think it will only be a matter of time before East Side Plating and Right 2 Dream Too are best buddies, and I think that synergy will develop,” said Saltzman, referring to the company whose land abuts R2DToo’s new home. “I think this will be something we will look back in a year or two from now and we’ll probably wonder what all the controversy was, just like many people look at where Right 2 Dream Too now is and say, ‘What was all that controversy about four or five years ago when Saltzman was making a stink about it?’”

Fritz talked about receiving 537 phone calls from people who said the City needed to do more to deal with houselessness. She agreed with their position–“Being in tents is not a solution. It’s a temporary place for safety off the streets.”–while adding that solving the problem will require much more money than the City has to spend on the issue. “For those who are saying, ‘yes, take care of people who live outside, and don’t cut police or fire or anything else I care about,’–it just can’t be done.”

“Today my head and my heart are in conflict,” said Fish, the lone ‘no’ vote. While acknowledging Fritz’s hard work and dedication as well as R2DToo being a “symbol of hope, resilience, and determination,” Fish said he found the resolution overrode the zoning code and last use goals, disregarded concerns raised by the Central Eastside Industrial Council, and ignored issues of safety related to East Side Plating’s use of dangerous chemicals. He also found it problematic that the site would fall under the auspices of the Office of Management and Finance rather than the Housing Bureau and that the plan suffered from a “lack of clear accountability measures, benchmarks for success, or even a budget.”

While Novick stated those concerns are valid, he noted, “We unfortunately have people sleeping outside all around the city and we do not have places inside for all of them to go. The mayor and Commissioner Fritz have worked on this for a very long time, and I don’t have another site to suggest.” 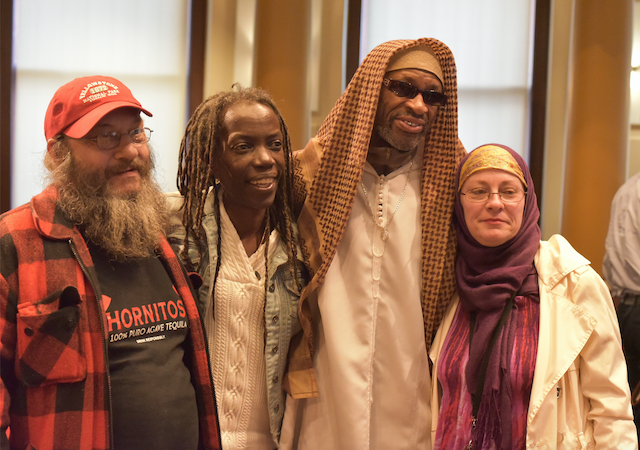 At the previous council meeting, some opponents expressed fear of being in close proximity to people without housing. Novick sought to allay those anxieties by repeating what Chief of Police Larry O’Dea had told him–“Police do not get called to Right 2 Dream Too.”

Hales talked about the struggle to find a suitable site for the rest area. “It’s difficult. It’s messy. It’s imperfect. It’s incomplete. But it’s better than drift. It’s better than accepting that homelessness is permanent and that we’ll never get any better.”

The resolution’s approval was an important achievement for Commissioner Amanda Fritz, a stalwart ally of the people of Right 2 Dream Too. After losing the 2013 site, she continued pushing, and with Hales’ help, finally made it over the finish line. In typical fashion, Fritz thanked a long list of those who had made success possible, and following the meeting, congratulated members of R2DToo who were awash in smiles at their enormous victory.

Also a huge win was the fact that a government body was willing both implicitly and explicitly to  acknowledge the humanity of people without housing by overriding the arguments–many of which were dehumanizing–of so many of R2DToo’s opponents.

Most of all, though, there seemed to be relief that a great weight has been lifted from the many people without housing who use R2DToo–a safe space that now has been ratified by City Council.

“We made it,” said R2DToo Vice-Chair Brad Gibson, while leaving the council chambers. “We have stability.”