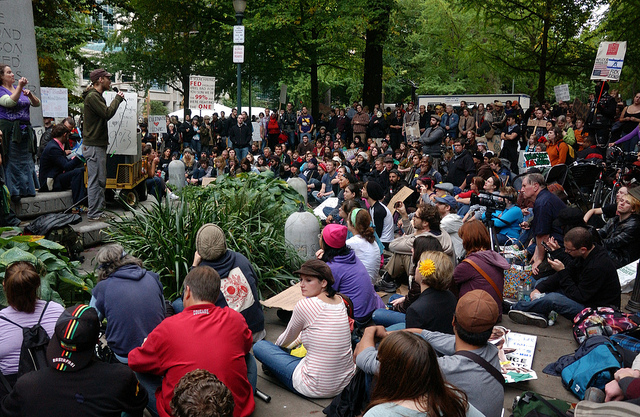 When I headed down to the protest I had no idea what to expect. What I found had a profound effect on me in that I learned I wasn’t alone, there were people there from all walks of life thinking and feeling the same things as I have been about the state of our country. That the everyday working class, have been forgotten and our voices have been drowned out in the sea of noise coming from the flow of money on Wall Street into our political system. I found that people are fed up, angry, and frustrated like I am, that our government no longer works for us and have begun to find their voice and stand together, realizing that the only way to take back what is ours is to stand up and fight for it. I was inspired by the peaceful intent to get the attention of those who have refused to listen, knowing there is power in numbers and if we join together and lift our voices, together, we can change things.

I talked to people from all walks of life who feel their lives have been stolen from them. The elderly man who worked 30 years for the same company, invested, planned for his retirement, only to lose it all when the stock market fell, and now worries about potential cuts to his Social Security Benefits and Medicare. A student who’s degree can’t get her a job, and has enormous student debt facing her. Teachers, who are getting their jobs cut, salaries lowered, benefits slashed, who have to supply classroom needs on their own due to no money in their school budgets for the basics, just to give students today half a chance to learn, who teach in classrooms that need to be repaired. A family with two small children, who are now homeless, having had their home foreclosed on, worried about where they are going to sleep tonight. Everyday middle class working people, who for the last 30 years have watched big corporations take our jobs overseas instead of re-investing in our country, raking in huge profits, while at the same time laying off workers here, cutting benefits, wages, and taking away employee rights to bargain for decent wages, benefits and working conditions, while pouring money into our federal government elections, buying our politicians and writing the policies and regulations that have destroyed middle America.

Michael Moore, award-winning Hollywood director, after being down on the street in New York and talking with the demonstrators there, said in a recent interview on Keith Olberman, “People are pissed. They want Wall Street to be held accountable, to see someone arrested for the crimes that have been committed against the middle class, the robbing and pillaging of their lives and freedoms, and they feel Wall Street is mainly responsible and that the only way to get their attention is for enough of us to take to the streets and raise hell”. I have found after being down at the protest here in Portland that that is certainly what people are feeling. They want their politicians to listen to their voices after all we are who they are supposed to work for, not the big banks and corporations. But, they also want equal opportunity to prosper, and that no longer exists in the minds and lives of many who have lost everything due to corporate greed and Washington’s refusal to listen.

It does seem that there are some vying for political office that are hearing the voice of the people in the streets. Elizabeth Warren, running for the Senate in Massachusetts, said recently in a town hall meeting that “Not one billionaire, millionaire, CEO, or big co-operation got their on their own. They got their on the backs of the very people who work for them, the people who built the roads they move their goods on, who run the power plants that generate the energy to move the production lines, the people who clean their offices, homes, and nurture their children, and it’s time they pay it forward and pave the way for the next generation coming up.” This was significant for me as I have said the exact same things, and it was nice to hear a potential Senator actually say the same thing, with the same feeling and conviction I have as this reality seems to be lost to those on Wall Street and in Washington, even if those of us who built this country haven’t lost sight of it, we live it every day. We need more people like her to stand with the broken middle class of this country and help us to help ourselves. We don’t want a handout, or a free ride, we want what we have earned. The right to decent wages and working conditions, health care, education, fair taxes, a home to raise our families in, to prosper, in what was once the greatest country in the world, where the right to Life, Liberty, and the Pursuit of Happiness written into the Declaration of Independence, applied to us all, not just the rich.

2 comments for “Letter from Lana Buchanan”