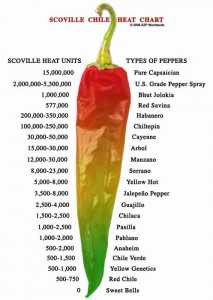 The effect of pepper spray is beyond my imagination. A young, healthy police cadet in the prime of health calls it  “the worst pain I have ever experienced in my life.” Portland’s Liz Nichols says, “It felt like my face, my hands, my ears were on fire.”  Unimaginable pain. But beyond the pain, what exactly are the health risks of being hit in the face by a stream of pepper spray?

At the moment, the Portland Police Bureau seems to have backed away from riot suits and pepper spray, though they make no promises about their future plans. As a nonviolent occupier, I continue to assess options and risks inherent in civil disobedience and expression of my first amendment rights, so I called the  Oregon Poison Center and reached Dr. Robert Hendrickson, Associate Medical Director. He explains,

“Various riot control agents, pepper spray and others, work by activating pain receptors in the skin. They cause severe pain to the eyes, nose, and mouth, and they cause production of fluid from all those places.”

Riot control agents? By any definition, a riot involves a group of violent people bent on breaking the law. If police “kettle” or trap nonviolent demonstrators exercising their constitutional rights in areas where the demonstrators cannot escape, and then, while armed and protected, spray the unarmed people with pepper spray, it’s clear who the violent rioters are. The guys in black. But I’m not about to spray them with anything. I’m nonviolent.

So what can I do if I’m hit in the face with a stream of pepper spray, or if I’m standing next to someone else who is hit with it?

Hendrickson tells me, “What we recommend to people who encounter pepper spray, what we think works best and fastest, is just plain water: flush with water immediately, as much water as possible, and keep flushing till the pain stops.” 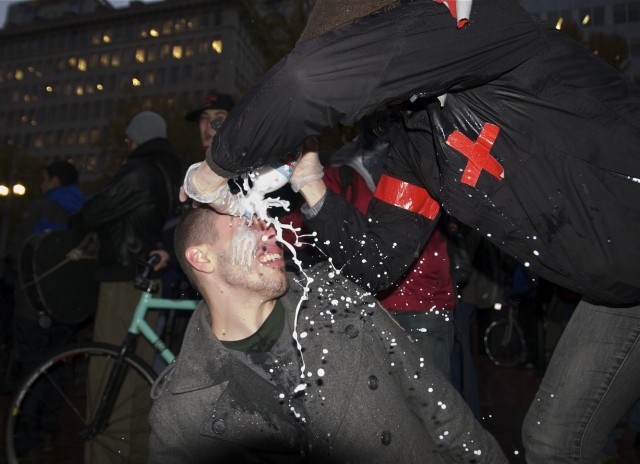 Hendrickson says the Poison Center does not recommend other agents, such as milk or mineral oil. He says the standard emergency room procedure for treating people who’ve been subjected to pepper spray is “Just plain water. Water, water, and more water.”

I asked about the affect of pepper spray on people who have nasal allergies or asthma. According to Hendrickson,

“Any substance like this can induce an asthma attack. If I had asthma or some kind of respiratory difficulty, I would not put myself in a situation where I’d be exposed to pepper spray.” He added, “Of course, I guess most people don’t know when it’s coming.”

“ Research tells us that pepper spray acts as a potent inflammatory agent. It amplifies allergic sensitivities, it irritates and damages eyes, membranes, bronchial airways, the stomach lining – basically what it touches. It works by causing pain – and, as we know, pain is the body warning us of an injury…. Capsaicins inflame the airways, causing swelling and restriction. And this means that pepper sprays pose a genuine risk  to people with asthma and other respiratory conditions.”

Blum quotes from a number of medical studies that emphasize the risks and dangers of pepper spray, including this one : “ Studies of the effects of capsaicin on human physiology, anecdotal experience with field use of pepper spray, and controlled exposure of correctional officers in training have shown adverse effects on the lungs, larynx, middle airway, protective reflexes, and skin. Behavioral and mental health effects also may occur if pepper spray is used abusively.”

There is a bit of relatively good news. Ten police officers who volunteered for a study of the effects of a single dose of pepper spray in the eyes had no damage to their corneal nerves a month later. But that study ends, “it can be concluded that single exposure of human eyes to OC [pepper spray] is relatively harmless to the cornea and conjunctiva. However, one should be cautious in repeated OC exposures, because long-lasting changes in corneal sensitivity could occur.”

Better not get hit with it twice. Dorli Rainey,  the 84-year-old retired teacher who got pepper sprayed in Seattle, has had her one dose.

More details from (of all places) the Wall Street Journal here.

****UPDATE: Inventor of pepper spray on Democracy Now! decries use of this form of poison on peaceful protesters.