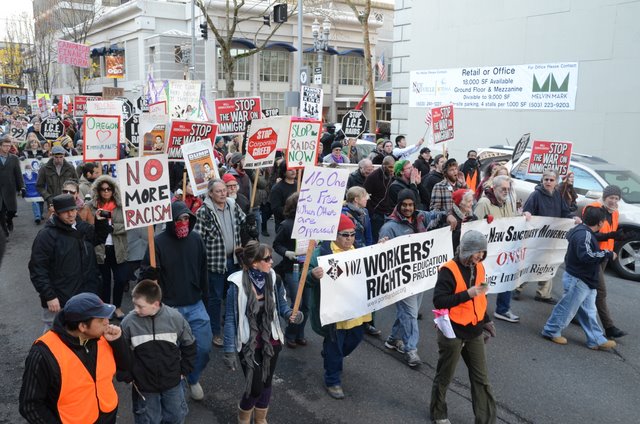 It’s been said for weeks that once the Occupations are out of the parks, they will diversify, de-centralize, and take as many creative forms as there are people and groups to organize this movement. Today, December 17th, is seeing a re-occupation in New York City, solidarity protests with Bradley Manning in Virginia for the whistle-blower’s birthday, and here in Portland, a rally and march for Immigrant Rights.

Just as there will always be protesters that choose to work outside of accepted activist strategies, and without the approval of a condescending city government, there will as well be groups that work within these channels for strategic purposes. The march and rally today applied for and received a permit from the city for its activities, for the reason of making this march as welcome to people who could not risk civil disobedience or other brushes with the law. Unfortunately, this is a very real need; the unfair persecution represented by immigration law in this country and the harsh tactics used by government agencies to uphold it are the target of this protest.

It was pertinent then, that the rally began in Shemanski Park. The park takes its name from “Shemanski Fountain, given to the city by Joseph Shemanski in 1926 to “express in small measure gratitude for what the city has done for me.” Shemanski (1869-1951) was a Polish immigrant who started out as a traveling clock salesman before he founded the Eastern Outfitting Co. and became an extremely successful businessman.” Today, restrictions on immigration and persecution of those who run afoul of these oppressive laws are re-writing this long-celebrated American history of the so-called “land of opportunity”. Immigration law is used by the capitalist classes to exploit the working classes, who are often from other countries, and live in fear of these draconian policies. Their labor is underpaid, they are deprived of benefits and collective bargaining, and they are at times reported to authorities so they will be deported and their employers don’t have to pay them at all. 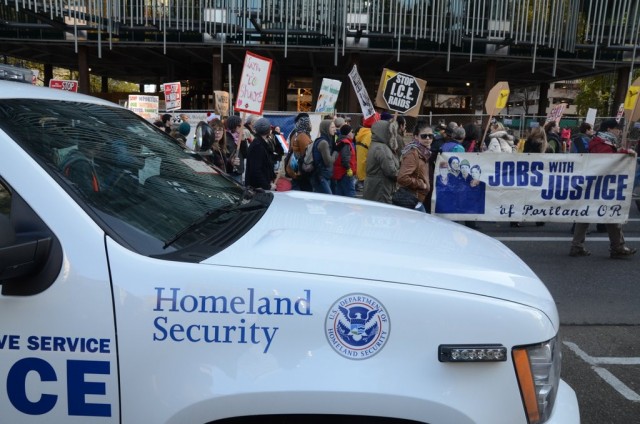 The speakers at the rally covered all of these facts, and articulated the need for immigrants and their allies to resist the efforts of those upper classes to scare them into complacency. They spoke about how the media serves the interests of those classes, in presenting the narrative that the people are not unified, and that the various groups and occupations are not allied behind these efforts, in resistance to these policies. The media continues to blame immigrants for the nation’s problems, and write them off as the minority, when they and their allies are quickly becoming the majority, if they are not already.

The protest march was entirely peaceful, as it wound through downtown Portland on this sunny winter morning. Onlookers and passing vehicles waved and honked in support, and protest signs bristled from the gathered masses.

There were a few stops along the way. First, at Wells Fargo, to protest against their funds’ investment in private prison companies. Then, at the World Trade Center, to protest free trade policies that exploit workers both in the US and in the rest of the world. As the protest passed Lownsdale Park, heading south on Salmon Street, the familiar chant went up, “Whose Park? Our Park!” and the protesters looked warmly at their gated park, freshly raked and tidied by Occupy Portland volunteers earlier in the week. The last stop was at the Justice Center, to protest the detention of immigrants. It was said that one of the questions they ask when an arrested protester is booked, is “where were you born?” A clear symbol of how our legal system discriminates human beings from the outset, if ever there was one. 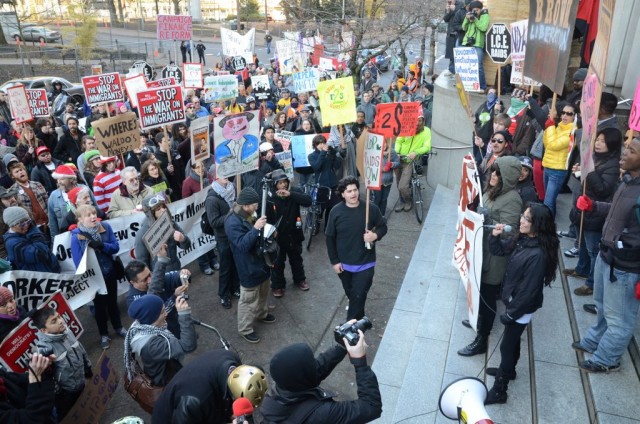 Back at Shemanski, the bike swarm orbited, while music played. The diverse crowd that gathered for the cause began to drift off, to carry on the rest of their Saturday. The crowd may have departed, but this is the sort of day of which this movement is now made: diverse people, and diverse movement plans. This march is over, but between it and other the other sorts of events that the wide span of this movement, there is no end: only continuous movement forward.