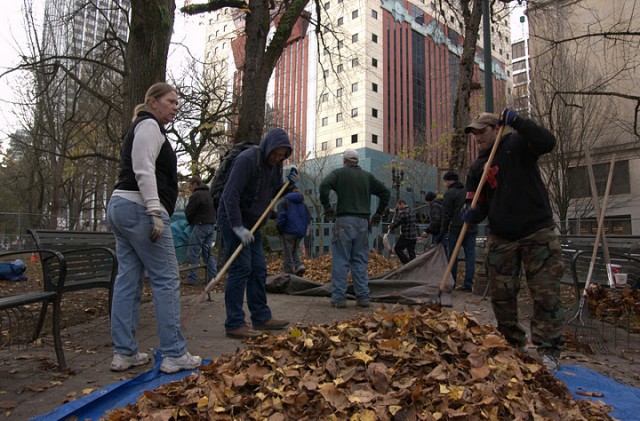 On Wednesday, December 14, Occupy Portland protestors were allowed to ‘occupy’ Chapman and Lownsdale parks once again. For this occupation, however, protestors came armed with workgloves and rakes, instead of tents and protest signs.

When Steve Pixley of the Portland Parks and Recreation Department put out a call for volunteers to help with the cleanup of the parks, the response was overwhelming. On November 21, shortly after putting out the request for volunteers, Pixley sent an email to volunteers:

It didn’t take long but our first project – leaf raking, is now full. I have 40+ names and commitments from a few groups. That ought to cover all the rakes we can muster. More importantly, I’m pretty sure this work force can clear all the leaves by 2:30. Thank you all for committing, whether for two, four or six hours. We’re all busy, it’s great you can give us some of your time.

However, due to heavy rainfall, the raking initially scheduled for November 23 had to be delayed. Pixley contacted volunteers yet again on December 7, to schedule the raking for the following week on December 14, and again the response was overwhelming. Volunteers were scheduled throughout the day to help balance the load of work and availability of rakes.

At about nine o’clock in the morning, the gates were opened on one corner of Chapman, allowing volunteers the ability to enter into the park. A canopy was set up at the entrance, with sign-in sheets, gloves and coffee. After a brief explanation of the game plan–rake leaves into piles, load them on tarps and then carry them to trucks for removal–protestors dispersed to various corners of Chapman Park and began working to ‘evict’ the only remaining ‘occupier’ of the park: the autumn leaves.

In what seemed like no time at all, Chapman Park was cleared of leaves, and the last truck loaded down with leaves drove off to empty its load. Volunteers moved over to Lownsdale, and one of the parks employees locked Chapman back up. Steve Pixley went over to the office where his boss works briefly, and one of his supervisors commented that she thought that volunteers were supposed to be cleaning the parks this morning, while noting the empty and locked Chapman Park down below. Pixley laughed and told her it was done already, and upon doing a double-take of the view, she realized that this was, in fact, true! When Pixley returned to volunteers, he was tickled pink and shared this story and how impressed he was at the speed at which volunteers were working to get the job done. 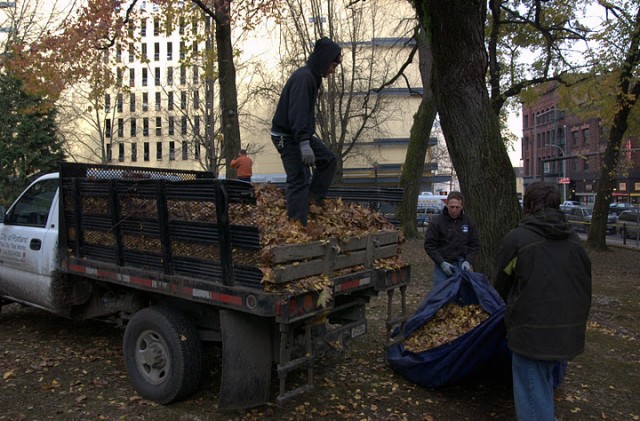 The Occupy Portland livestream was making rounds of the park, showing the work being accomplished to live viewers. At one point, after having spoken to nearly every volunteer in the park, the livestream team noted that every volunteer was related to Occupy Portland, with the only exceptions being the parks department themselves! Cookies donated by a local business were circulated to volunteers, and someone announced warm soup being served in front of Bank of America and invited the volunteers to come get some.

By 1:30 pm, Lownsdale was also cleared of leaves, and the job was accomplished. Pixley noted that the parks department had seed donated by another local company that specializes in seed, and that a unique mixture of mulch with coffee grounds would be applied, in addition to lime, to restore the soil’s health to prepare it for seed. Aeration will be done to relieve compaction, and by spring, the park will appear better than ever.

At 1:46 pm, Pixley sent out an email to all volunteers:

Wow – we finished about 20 minutes ago. People turned out in force, got right to work and wrapped up earlier than anybody expected. If you were there – THANK YOU!! If you arrived later – thank you too. Sorry we didn’t save any leaves for you, but we’ll have other offers soon.

Take care this Holiday Season. Here’s wishing us all a happy and healthy New Year.

Thank you to all the Occupiers who were there to help clean up the parks! Whose parks? OUR PARKS!