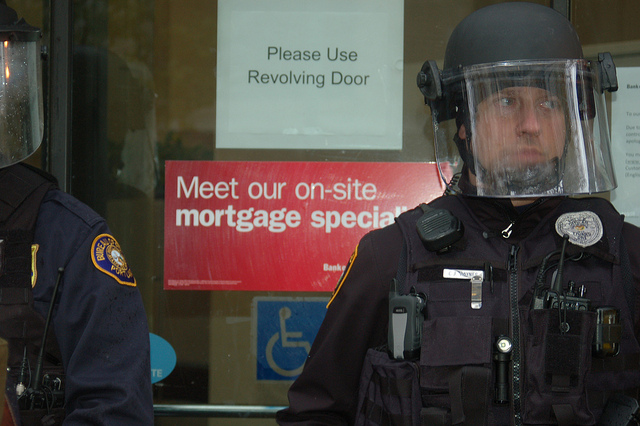 Every once in a while, you get to witness firsthand the sterilized, mechanical, inhuman, and ultimately ordinary injustices of our system’s procedures. On Friday, December 23rd, I received my latest exposure to this melancholy-inspiring fact of life by way of a trip to a property auction.

Every weekday at 10 and 11 AM around 25 foreclosed properties are auctioned off in a mind-numbingly slow and surprisingly unceremonious bidding process in a cramped corner on the steps of the Multnomah County Courthouse. On Friday, this ritual included 6 people: the “crier” or auctioneer, 4 individual buyers bidding on behalf of real-estate companies, and a curious pea-coated stranger with a notepad and a lot of questions. Also present, outside on the sidewalk, was a small group of people who had come to the auction on short notice to support Angela Hill and her two children who are currently in the process of being removed from their home in SE Portland for defaulting on a mortgage owned by Wells Fargo.

The buyers told me that when they bid on homes, they are dealing directly with the banks and don’t interact with the prior homeowners whom they believe to be already off of the property. They seemed genuinely surprised to find that Angela was, in fact, still in the home. As I explained the situation, including Angela’s contribution to her community–including involvement in Groundwork Portland, the Emerson Street Garden, and the da Vinci School–and why so many people had gathered to support her, it was immediately apparent from the pained facial reactions of the buyers that the human element was usually absent from these proceedings. Similar to the lack of empathy a bombardier would feel for his unidentifiable victims while mechanically unloading bombs out of an airplane from a high altitude, the auction process is infinitely easier to stomach when those involved are spared the moral pangs of having to experience the personal sufferings of the individuals whose plight they are contributing to. To use a generalization that encompasses the socially created barriers invented to take advantage of the symptoms of our intuitive psychological nature, otherwise moral human beings can hide behind illusions, weak rationalizations, and outright lies if the victim is unknowable, ignorable, or out of sight. Here, the rationalization that the banks are the real enemy, and that the people are out of the home before auction, when added to the barking of bid orders from off-site authorities through earpieces are more than enough to overcome any moral qualms the buyers might have. Had we not been there to tell Angela’s story, these buyers might have never even considered her situation–mechanical, repetitive, and boring as the auction process is.

In practice, the auction usually works like this. The buyers start by presenting certified checks and other proofs that they are bonafide buyers. All of the buyers have an idea of how much they are willing to spend on a property because their companies have done due diligence in valuing properties ahead of time. Then, the crier recites a long legal document outlining the regulations of the process (largely ignored by the bidders who undoubtedly have heard it many times before). After what seems like an eternity, the business of bidding begins. The crier introduces a property by address, asks for a minimum bid, and the bidders best one another by adding anywhere from one to a hundred dollars until someone emerges victorious. One of the buyers told me that the process sometimes can take hours for the purchase of a single property. If a prior-determined reserve price isn’t met during the bidding process, the bank automatically buys the property back at the reserve price. The buyers told me that they go through this ritual twice a day, five days a week, always without reference to the facts underlying a property’s transition from occupied to available.

Interestingly, these specific buyers had been exposed to “Occupiers” once before. They reported to me that on one prior occasion, a group of people had come to the auction and physically disrupted it by shouting and shaming everyone involved. Though they clearly understood the aims of the disruption, they found it annoying and distasteful to be personally accused of perpetrating evil. Unsurprisingly, the buyers reported to me that they much preferred the civil conversation and discussion to the yelling and chanting. And despite that bad experience, they still had sympathy for homeowners who had been victimized by deceptive and fraudulent lending practices, and were largely in agreement that the grievances of the Occupy movement were legitimate. In addition, these buyers were eager to volunteer that large banks are enemies to the community. Personally, I found these buyers to be very nice people and believe that they could be enlisted as allies in our larger struggles with banks if we are able to engage them in the correct way. They belong to the 99% as much as anyone and have a wealth of experience in real estate transactions. At the very least, we need to continue to learn from knowledgeable people to continue to improve our understanding of the system’s flaws so we can continue to develop creative ways of fixing it.

On that particular day, Angela’s home evaded purchase and title reverted back to Wells Fargo. It’s hard to say if our gathering or my discussions with buyers had any effect on this eventuality or if the property was simply undesirable. Regardless of the “real” answer, it is helpful for Angela that her dispute remains with Wells Fargo and not a third party. Perhaps we can draw media attention to her plight and shame Wells Fargo into renegotiating her mortgage. Only time will tell, but groups like We Are Oregon and Unsettle Portland–the actual organizers of this event–will continue to fight on behalf of families like Angela’s with innovative and effective actions to bring ordinary injustices to public light.

I hope that more and more people will continue to answer the calls to show up to these sorts of events. This time the call came by Facebook message the night before. The gathering of people alone is enough to bring media to cover events and often sends companies like Wells Fargo into panic mode to remedy the bad press coverage as fast as possible. In practice, this could be the difference between a family continuing to occupy a home or being out on the streets. And, though protecting a single home may not have the star-appeal or significance of a revolutionary change, for Angela Hill and her family, it means the world. Simply showing up and lending your body is sometimes enough to ensure that our community members have some protection against the systemic forces that can easily overwhelm an individual or family. The collective talents of a small group really can stave off disaster and injustice.

Even if have to take it one person or family at a time, we can, from the ground up, create communities based in solidarity where people are protected and valued simply because they exist. In effect, we are re-injecting humanity into the mechanical operations of our system. This is progress. And it is happening.