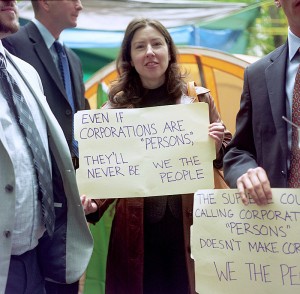 On January 12, 2012 the Portland City Council adopted an historic resolution supporting an amendment to the US Constitution affirming that corporations are not people and money is not speech. The resolution was supported by the Occupy Portland Solutions Committee, that organized a major outreach campaign to strengthen the resolution’s language before the vote. “By passing this resolution, the City takes a huge step toward protecting the 99% whose voices are drowned out by unregulated corporate campaign spend,” said Erin Madden, who is a member of the Occupy Portland Solutions Committee.

Mayor Adams proposed the resolution after the Occupy Portland General Assembly passed a proposal in October, 2011 to end “corporate personhood.” Members of the Occupy Portland worked with Move to Amend Portland to generate nearly 2,000 comments to City Council calling for specific revisions to the original text of the resolution and requesting a referral of the issue to the voters. “The revisions were necessary in order to make clear that corporations are not entitled to any of the rights possessed by natural persons and protected by the U.S. Constitution,” said Madden. Members of Occupy Portland met with Mayor Adams’ staff and proposed language to address the issue of corporate privileges, which are distinct from the rights of natural persons.

This language was ultimately adopted in the revised resolution which passed 3-0. Now the city attorney’s office will “determine the legality and process of referring an advisory vote to the citizens of Portland on the issue of corporate personhood, and refer their findings back to Council for further consideration.” Two commissioners, Nick Fish and Dan Saltzman, were absent.

Next Step: Occupy the Courts

On January 20, 2012, Occupy Portland will join Move to Amend Portland in Pioneer Courthouse Square at noon for a rally and march, as part of a national day of action called Occupy the Courts. This action commemorates the second anniversary of the Citizens United decision and calls for a constitutional amendment to restore democracy for the 99%.

The Portland City Council, by taking this action, joined city councils in Los Angeles, New York City, Albany, New York, and Duluth, MN, in calling on Congress to send a constitutional amendment to the states for ratification that overturns the infamous 2010 Supreme Court decision in Citizens United v. Federal Election Commission by clearly stating that corporations are not entitled to the rights of natural persons protected by the US Constitution and money is not speech protected by the First Amendment.

The Citizens United decision held that the First Amendment prohibits the government from limiting independent expenditures by corporations in order to influence elections. This holding was based on the premise that corporations are people entitled to the protections of the US Constitution and money is political speech.

Such legal fictions follow an old tradition that served to justify oppression through the “justice” system. Roman law held that only the “pater familias” (father of the family) was a person-in-law. Only he could vote, hold office, or testify in court (he swore on his testes). Younger males, all slaves, and all women were non persons in the eyes of Roman law. Similarly, when Blackstone codified English Common Law he stated: “In marriage, husband and wife are one and that one is the husband.” And according to the French structuralist Lévi-Strauss, “Women are like words; they should be communicated and exchanged” [by men].

In opposition, Sen. Bernie Sanders (I-VT) introduced a constitutional amendment to the U.S. Senate that would overturn the ruling which classified multi-national corporations as people and therefore made them entitled to the same rights as living, breathing, human individuals.

“There comes a time when an issue is so important that the only way to address it is by a constitutional amendment,” Sanders said. He had previously described the Citizen United ruling as “basically insane. Nobody that I know thinks that Exxon Mobil is a person,” Sanders said in November.

Sanders is accompanied in his endeavor to restore fiscal sanity to the political system by Rep. Ted Deutch (D-FL), who has introduced a companion measure in the U.S. House.

Sens. Tom Udall (D-NM) and Michael Bennet of (D-CO) have also introduced a similar constitutional amendment that would essentially defeat Citizens United by granting Congress and the states the authority to regulate the campaign finance system. Udall and Bennet hope that by emphasizing states’ rights, they’ll gain the support of a few Republicans.

Occupy Portland on January 20, 2012 will rally and march at noon in Pioneer Courthouse Square, as part of a national day of action called Occupy the Courts.